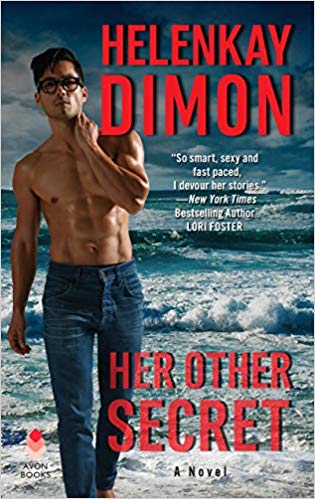 Is it the perfect escape?

Whitaker Island is more than a getaway. For Tessa Jenkins, the remote strip of land in Washington state is a sanctuary. Fleeing from a shattering scandal, she has a new name, a chance at a new beginning, and a breathtaking new view: Hansen Rye. It’s hard not to crush on Whitaker’s hottest handyman. At six-foot-three and all kinds of fine, he’s also intensely private—and the attraction between them soon simmers dangerously out of control.

…or a private trap for two lovers?

After a devastating family tragedy, Hansen finds the pebbled shores of the faraway island to be an ideal refuge. Letting down his guard for the sexy, impulsive Tessa is an unexpected pleasure. But there’s another newcomer to Whitaker. He’s no stranger to Hansen. And when he’s murdered, the crime casts a threatening shadow. As suspicion falls on Hansen, all his secrets are about to collide with Tessa’s. Now the pasts they were determined to outrun are catching up to them. So is a killer who’s putting their love—and their lives—on the line.

Don’t let the hottie on the cover fool you – as he tries to do to every single person on Whitaker Island. Her Other Secret is definitely romantic suspense, and that hottie has plenty to hide.

As does our heroine – as well as every single other resident of this tiny island off the coast of Washington State. But only some of those secrets are deadly.

While everyone on Whitaker is running away from something, it’s hottie Hansen Rye’s secrets that have come to get him – not that he knows that – at least at first.

Tessa Jenkins has been watching a yacht parked in the water opposite her tiny cottage for more than 24 hours, and she’s had enough. Something has to be wrong. The marina has plenty of space – and its on the other side of the island.

There are no lights on the boat – and no movement. It’s interesting that Tessa doesn’t think it’s her own secrets that have come to get her, but then, the person looking for her is generally a whole lot splashier than anything happening on that boat – which seems to be nothing at all.

Tessa is currently on the outs with the island’s only cop, so when she can’t stand the suspense any longer, she calls the person that everyone on Whitaker calls when they need something done. She calls Hansen, the resident handyman – and Tessa’s secret crush.

Not that Hansen isn’t the secret crush of every woman on the island – single or not – and probably some of the men as well. He’s gorgeous. A complete grump to the point of being an antisocial asshole, but gorgeous.

And generally useful. He fixes everything that’s broken, so Tessa is sure that he can fix whatever must be wrong with that silent, parked boat. That it’s a good excuse to call him is just icing on the cake.

That’s when things go pear-shaped. As Hansen and Tessa argue about going out to the boat, a man walks out of the water, fully dressed in a business suit, and heads inland – right past them. It’s weird. Really, really weird – especially when the man disappears.

It gets weirder still when the man turns up dead on Tessa’s front yard the next day. And all of Hansen’s secrets come out. And Tessa’s comes to the island to get her.

Escape Rating B: This is one of those stories that can best be described as “oddly charming”. I liked it, I enjoyed reading it, but it doesn’t hold up to a whole lot of scrutiny. It’s what I call “mind candy”. A good reading time that does not require deep thought that I probably won’t remember this time next year. But fun while I on Whitaker Island with Hansen and Tessa. It’s a beach read, ironically (or not) set mostly on a beach! 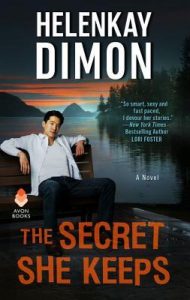 The setup of Whitaker Island, both the way it works and the people who inhabit it, was interesting. All 200 or so residents merely rent their cottages – there’s a mysterious owner behind the scenes who actually owns everything. There’s no government – just a governing board. One firefighter and one cop – both employees of that mysterious owner. Who remains mysterious throughout the book. I kept expecting him, her or it to be revealed, but they were not. (There’s a second book in this series, The Secret She Keeps, coming out in December. Maybe all will be revealed then.)

Whitaker seems to be a place where people escape from the rat race but bring all the rats with them – including their own ratty selves. Everyone has something to hide, and everyone gossips like it’s going out of season – which of course it never does.

I liked both Hansen and Tessa, as well as the way they got together, but I think that their respective secrets were both a bit over-the-top, contributing to the whole “fun while it lasted” vibe of the story.

While not giving those secrets away, it felt like Tessa’s secret just wasn’t nearly as big or as bad as she made it out to be. And the “ripped from the headlines” reasons for that secret didn’t quite gel.

Hansen’s secrets, on the other hand, were so big and so bad and ended up being so convoluted that they ended up in “bwahaha” villain territory. And I did figure out whodunnit way before our protagonists and wondered why they didn’t feel the clue-by-four whizzing over their heads.

But then, the epic storms cutting off the island and isolating the villagers may have had something to do with their distraction – not to mention their on-its-way-to-resolution sexual and emotional tension.

In the end, a good reading time was had by all. Her Other Secret feels like it would be a great beach read – at least as long as a corpse doesn’t turn up on your stretch of beach!

GIVEAWAY TERMS & CONDITIONS:  Open to US shipping addresses only. One winner will receive a paperback set of Her Other Secret and The Protector by HelenKay Dimon. This giveaway is administered by Pure Textuality PR on behalf of Avon Books.  Giveaway ends 7/15/2019 @ 11:59pm EST.