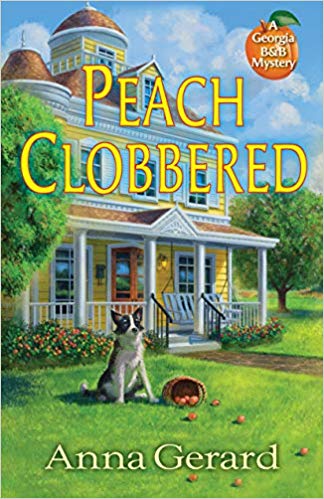 What’s black and white and dead all over? Georgia bed and breakfast proprietor Nina Fleet finds out when she comes across a corpse in a penguin costume.

Nina Fleet’s life ought to be as sweet as a Georgia peach. Awarded a tidy sum in her divorce, Nina retired at 41 to a historic Queen Anne house in quaint Cymbeline, GA. But Nina’s barely settled into her new B&B-to-be when a penguin shows up on her porch. Or, at least, a man wearing a penguin suit.

Harry Westcott is making ends meet as an ice cream shop’s mascot and has a letter from his great-aunt, pledging to leave him the house. Too bad that’s not what her will says. Meanwhile, the Sisters of Perpetual Poverty have lost their lease. Real estate developer Gregory Bainbridge intends to turn the convent into a golfing community, so Cymbeline’s mayor persuades Nina to take in the elderly nuns. And then Nina finds the “penguin” again, this time lying in an alley with a kitchen knife in his chest.

A peek under the beak tells Nina it’s not Harry inside the costume, but Bainbridge. What was he doing in Harry’s penguin suit? Was the developer really the intended victim, or did the culprit mean to kill Harry? Whoever is out to stop Harry from contesting the sale of his great-aunt’s house may also be after Nina, so she teams up with him to cage the killer before someone clips her wings in Peach Clobbered, Anna Gerard’s charming first Georgia B&B mystery.

I want to know where Cymbeline is – because it sounds like a great place to visit that would only be a hop, skip and a jump from my home in the Atlanta exurbs. And we all need a quiet place to escape to every once in a while.

Not that things are really quiet in tiny Cymbeline – especially not for Nina Fleet.

Nina would love to open a B&B in her newly acquired Victorian house, but there are roadblocks a-plenty in her way, including plenty of B&Bs that beat her to the punch. As much of a tourist mecca as Cymbeline has become, no place needs an infinite number of inns – until a sudden influx of displaced nuns gives the mayor a reason to fast-track Nina’s application.

Opening an instant B&B isn’t the only problem that Nina has to contend with. She bought her house legally, fair-and-square, cash on the barrel-head, etc., etc., etc. And she absolutely loves it. But Harry Westcott, the nephew of the late owner of Nina’s house, believes that he is the rightful owner of the property – and he’ll see her in court.

The worst part for Nina is that he might be. He probably isn’t, but there’s an off chance. Not that Nina did anything wrong in her purchase, but that the seller might not have had the right to sell in the first place. She’d get all her money back, but she really, really, really just wants the house. In a few short months, it’s become home.

Between Harry and the nuns, Nina seems to have her hands full. They only get fuller when a local property developer is killed while wearing Harry’s penguin suit. How that translates to Harry becoming a suspect in his murder is anybody’s guess, considering that Harry may be one of the few people in town who didn’t have a motive.

Nina can’t resist poking her curious nose into the affairs of her neighbors, and the murder of the least liked among them. And she can’t help but band together with Harry and the nuns when they are all under threat.

When they set a trap to catch the killer, the tables get turned. It’s up to the nuns to save the day!

Escape Rating A-: This was just a load of fun from beginning to end, from Harry’s first appearance in the penguin suit right up to his driving off into the sunset at the end, with the murder resolved but the ownership of the B&B still very much up in the air – along with Nina and Harry’s completely unresolved potentially romantic and currently contentious relationship.

Their “relationship” begins with a fairly twisted meet cute. Harry arrives on Nina’s doorstep, suffering from heat stroke (all too plausible with our hot, muggy Georgia summers) while wearing a penguin costume. Which isn’t helping with the heat stroke. Clutching an envelope in his hand that he believes proves his rights to own Nina’s house.

Watching the ebbs and flows of their always just-one-tick-away-from-mutually-assured-destruction relationship is always fun. They want to like each other. They want to trust each other. It’s entirely possible that they have the hots for each other. And they want to destroy each other’s claim to the house they both love.

And they need each other to solve the murder, just adding to the fraught possibilities.

The nuns, on the other hand, are surprisingly delightful from beginning to end. They are the perfect opening guests for Nina’s B&B, even if their reason for landing in her lap (so to speak) is pretty awful. And directly relates to their possible motive for killing that hateful real estate developer.

He’s the one who evicted them from their home and business. Most of the nuns have been together, making excellent cheese and saying their prayers, for 50 years together. With the loss of their convent and fromagerie, the archdiocese plans to retire them to separate communities. They are broken-hearted at the thought of losing their family-of-choice.

And absolutely perfect guests. Also surprisingly with the 21st century for a group of elderly semi-cloistered nuns. Their customers have kept them firmly rooted in the now – to Nina’s surprise, and to the detriment of the killer stalking Cymbeline.

This is definitely a cozy mystery, as it’s wonderfully light-hearted – even if it does feature a dead body – albeit a dead body in a borrowed penguin suit.

Nina’s exploration of the town in her process of eliminating would-be suspects introduces readers to all of the residents of this quirky little place. Even if she does go off the track of whodunnit on more than one occasion. Or perhaps especially because. And I went right there with her. I didn’t guess this one at all.

As Peach Clobbered reads like the first book in a series, I’m looking forward to reading Nina’s (and hopefully Harry’s) future adventures. And definitely getting to know the denizens of Cymbeline a whole lot better.