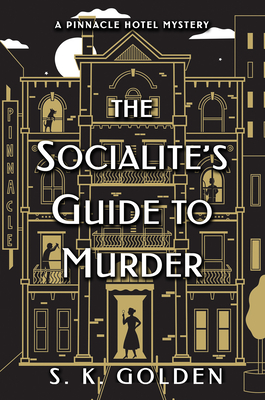 The hotel was her refuge, but scandal is afoot—and a killer stalks the halls in this charming series debut perfect for fans of Rhys Bowen and Ashley Weaver.
It’s 1958 and Evelyn Elizabeth Grace Murphy has not left the Pinnacle Hotel in fourteen months. She suffers from agoraphobia, and what’s more, it’s her father’s hotel, and everything she needs is there. Evelyn’s always been good at finding things, she discovered her mother dead in a Manhattan alleyway fifteen years earlier. Now she’s finding trouble inside her sanctuary. At a party for artist Billie Bell, his newest work is stolen, and Evelyn’s fake boyfriend (and real best friend), movie star Henry Fox, is accused of the theft. But just as Evelyn sets out to prove Henry’s innocence, she finds Billie Bell dead.
The murder weapon links the crime to the hotel’s chief of security. But why would he use a knife with his initials on the handle? With her beloved home in disarray, Evelyn joins up with hotel employee (and her secret crush) Mac Cooper to get to the bottom of the case.
As Mac picks locks and Evelyn snoops around the hotel, they discover the walls around them contain more secrets than they previously knew. Now, Evelyn must force herself to leave the hotel to follow the clues—but when she and Mac set off to chase a lead, their car crashes and they barely escape with their lives. Someone snipped Evelyn’s brake lines, and now the stakes have become dangerously high.
Evelyn’s knack for sleuthing—and her playful imagination—are always hard at work, and she throws an elaborate party at the hotel where every guest is a suspect. But will the killer emerge from the glamorous lineup? If not, Evelyn just might find herself…next in line for murder.

The socialite of the title, is Evelyn Elizabeth Grace Murphy, the daughter of the owner of the Pinnacle Hotel in Manhattan. Her penchant for finding missing items, such as a diplomat’s daughter or a supposedly stolen necklace lead to the search for a murderer when that murder occurs in her home and sanctuary – her father’s hotel where she lives in a top-floor suite designed and decorated just for her.

And her little purse dog Presley. Mustn’t ever forget Presley.

As a socialite, Evelyn lives to be seen, especially with her society page boyfriend, actor Henry Fox. Which is a bit of a problem, because Evelyn hasn’t left the Pinnacle in months. She can, but she can’t. When she was a little girl, she found her mother’s dead body just outside the hotel. The trauma has been drawing her in ever since, to the point where agoraphobia keeps her from leaving her sanctuary – the Pinnacle.

But Evelyn’s whole world teeters on a tightrope. Her romance with Henry Fox is a ruse, concocted of her need to be featured in the society columns and his need to keep the world from discovering that he’s gay. They’re the best of friends.

Howsomever, Evelyn is also friends with Mac Cooper, one of the bellhops at her father’s hotel. Mac walks the dog, keeps Evelyn up with all the hotel gossip, and is entirely too good at more than a little bit of kiss and canoodle.

So when a high-profile artist is murdered in the hotel, Mac is the perfect person to help her stage distractions, pick the locks of rooms the police have closed off, and generally assist her with her own investigation into the crime. Because Henry Fox is the prime suspect, at least until the ham-fisted police latch onto someone even better – the hotel’s head of security.

But Evelyn isn’t going to let things rest. The sanctity of her sanctuary must be restored, and she’s just the woman to do it. All she has to do is juggle Mac, Henry and whatever other secret Henry is keeping long enough to figure out whodunnit.

Escape Rating B: The Socialite’s Guide to Murder isn’t quite a cozy, but it is a light and bubbly mystery that has much of the same appeal. The Pinnacle, while not a small town, does a surprisingly good job of functioning as one for the purpose of the story.

Evelyn as a heroine embodies both the “poor little rich girl” and “bird in a gilded cage” tropes. What’s a bit different is that her cage is completely self-imposed. There’s a lot of trauma hiding behind her ditzy, spoiled persona. She’s aware that the ditziness is an act, although she’s a bit oblivious about just how spoiled she is.

Which is reflected in her relationship with Mac. They may be, probably are, falling in love with each other. And it is more than a bit frothy and bubbly, but there’s an undertone to it that gave me more than a bit of pause while reading. There’s a rather vast power imbalance between them as she’s paying him $10 or $20 every single time he does something for her. $10 doesn’t sound like that much, but it’s the equivalent of $100 in today’s terms. It adds up to a lot of money. She’s initially not at all sure whether he’s her friend because he likes her or because she’s paying him and it doesn’t feel like she worries about it nearly enough.

(If that shoe were on the other foot it would be an extremely squicky situation. It’s not less squicky because of the role reversal even if it’s intended to feel that way.)

Once I was able to let my willing suspension of disbelief set all of that aside, the mystery itself is a lot of fun. I did guess that the initial art heist that kicks things off wasn’t exactly what it seemed, but the murder that followed had plenty of tasty red herrings to fish for and tempting would-be clues to sent this reader on many an enjoyable wild goose chase.

The setting of the mystery within the confines of this great and grand hotel was a treat. It still felt like a cozy in a setting that isn’t really cozy at all. More like elegant and opulent, and it was a pleasure to read the way it all worked and how Evelyn’s world came together.

So the mystery is appropriately puzzling, the setting is different in a delicious way and the heroine and her little dog are fun to follow. If you like your mysteries with more than a bit of bubble and froth The Socialite’s Guide to Murder is a lovely little read.

And for anyone who enjoyed The Three Dahlias, Evelyn Elizabeth Grace Murphy the amateur sleuth would fit right into their crime solving shenanigans – once she is able to leave the Pinnacle. Maybe in the next book in the series.

4 thoughts on “Review: The Socialite’s Guide to Murder by S.K. Golden + Giveaway”