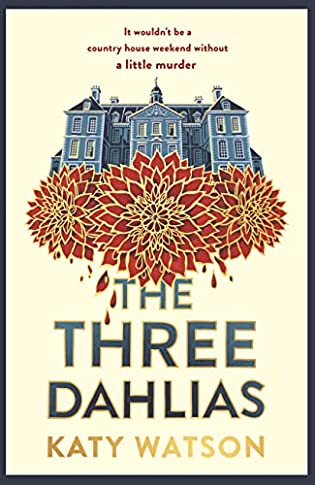 Three rival actresses team up to solve a murder at the stately home of the author who made them famous - only to discover the solution lies in the stories themselves. A contemporary mystery with a Golden Age feel, perfect for fans of Agatha Christie and Jessica Fellowes.
In attendance: the VIP fans, staying at Aldermere; the fan club president turned convention organizer; the team behind the newest movie adaptation of Davenport's books; the Davenport family themselves - and the three actresses famous for portraying Lettice's 1930s detective, Dahlia Lively.
National treasure Rosalind King, from the original movies. TV Dahlia for thirteen seasons, Caro Hooper. And ex-child star Posy Starling, fresh out of the fame wilderness (and rehab) to take on the Dahlia mantle for the new movie.
Each actress has her own interpretation of the character - but this English summer weekend they will have to put aside their differences, as the crimes at Aldermere turns anything but cosy.
When fictional death turns into real bodies, can the three Dahlias find the answers to the murders among the fans, the film crew, the family - or even in Lettice's books themselves?

The Three Dahlias is intended to take readers back to the genteel but thrilling mysteries of Dame Agatha Christie, Dorothy Sayers and Marjory Allingham but with a contemporary twist. What better way to combine the golden age of mystery with the present than by a convention of mystery fans, set on the grounds where one of their favorite mystery series was written, with not one but three of the actors playing their favorite character serving as guests of honor?

It may sound like a scheme guaranteed to give the fans the experience of a lifetime. But anyone who was a true student of those mysteries would tell you that the convention is also the perfect setting for murder. If only to provide the once and future Dahlias with the opportunity to solve either their last – or their first – case.

All they have to do is stop trying to one-up each other long enough to figure out whodunnit.

Escape Rating B: Although there’s a mystery, this isn’t really about the mystery. It’s about the people, and very much like Knives Out, about the relationships between the people and where the hidden stress points are.

That no one is going to miss the victims makes it that much easier for the reader to sink into the story and just enjoy the fun – even if it does take the first third of the book to really get going.

Because first we have those three Dahlias, and they are much more interesting than the murder. The three women represent different stages of life and different points in a career. If this were a fantasy they’d be the classic female triptych of maiden, mother, crone. Or perhaps the Fates. Certainly the fate of both the victims and the perpetrator.

It all starts with someone who seems to be out to get all of them – only for that person to end up getting got. And not by any of them. But along the way, what makes the story fun is the way that these women, literally set up to be rivals at every turn, band together in an unusual bond of sisterhood.

After all, they are all Dahlia, and it’s up to Dahlia to investigate murder when she sees it.

What made this fun as a reader was that I kept wanting to figure out, not so much whodunnit, as ‘who is Dahlia?’ (The idea of the convention seems more than plausible. After all, there is an annual Agatha Christie convention in Torquay.) The thing is that Dahlia Lively reminds me a lot of Phryne Fisher, but that series didn’t even start being published until 1989. There’s not enough history.

There have been more than enough Miss Marples, but that’s a role that an actor takes on much later in her career. Tommy and Tuppence hasn’t been filmed nearly often enough. But it’s fun to imagine.

The Three Dahlias turned out to be light and frothy fun. It’s a lovely little mystery, very atmospheric as a murder at a fan convention (my favorite in this vein is STILL Bimbos of the Death Sun), and as an homage to the Golden Age of Mystery and as a classic country-house murder all rolled into one.

If you’re looking for a light distraction filled with just the right amount of found sisterhood and murderous intentions, The Three Dahlias is quite the treat.

2 thoughts on “Review: The Three Dahlias by Katy Watson”