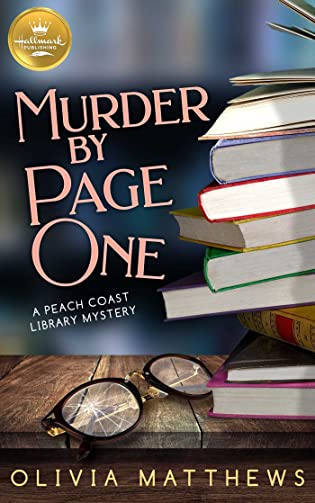 If you love Hallmark mystery movies,
you’ll love this cozy mystery
with humor, romance, and a librarian amateur sleuth.

Marvey’s a librarian from Brooklyn who makes book-themed jewelry as a hobby, looks after her cranky cat, and supports events for readers and authors. She’s still adjusting to quirky small-town life in Georgia—and that’s before she discovers a dead body in a bookstore.
When her new best friend becomes a suspect, Marvey develops a new hobby: solving a murder mystery. With her talents for research, her knowledge gleaned from crime novels, and a whole lot of determination, she pursues the truth. But even as she gets closer to it, could she be facing a deadly plot twist?
This first in series cozy mystery includes a free Hallmark original recipe.

Cymbeline and Peach Coast Georgia seem to be just up the road from each other, both are picturesque small Georgia towns, not too near and not too far from the “big” cities of Atlanta and Savannah. Both are places where an outsider can be considered a “real” resident after not too much time, and both seem to be lovely places for a extremely amateur detective to take up the investigation of murder as a slightly dangerous hobby.

If you’re wondering, Cymbeline is the location of the Georgia B&B cozy mystery series, while Peach Coast is the setting for today’s cozy mystery, featuring Marvey Harris as the budding sleuth desperate to save her best friend in her new town, Jo Gomez, the owner of the oh-so-tempting To Be Read Bookstore.

Back to Marvey, who is always very tempted by that bookstore, as she is the recently transplanted Community Engagement Director at the Peach Coast Library. The more that she can raise awareness of the library and increase participation in all the wonderful things that the library has to offer, the better her chances of helping the library to get a much-needed budget increase – not to mention keep the job she moved from New York City (and the New York Public Library) to take.

Synergy between the library and the local bookstore is certainly part of her strategy as it is in real library life too. That Marvey and Jo have bonded over their mutual love of reading is icing on a very tasty cake.

Or it is until their big event at the bookstore, a multi-author book signing for several published authors who live in Peach Coast, is interrupted by the murder of one of those authors who is supposed to be signing her books.

But when Fiona Lyle-Hayes doesn’t come out for the signing, Marvey, Jo and local newspaper owner, editor AND reporter (also local heartthrob) Spence Holt start searching the store’s backrooms for their reluctant author. Only to discover her not-yet-cold corpse.

When the local cops seem to be taking the easy way out of solving the murder – accusing Jo because the body was found in her store – instead of actually investigating the crime, Marvey and Spence take the investigation into their own amateur hands.

After all, they’re both good at research, and they have much more open minds than the local deputies. The deputies want Jo to be guilty because she’s not a local and it would make their jobs easier all the way around if she were the culprit.

Marvey and Spence however, are sure that Jo is innocent – and certain that there were plenty of locals who had a much better motive – actually any motive at all – for killing one of the most unpopular people in town.

Their quest to find a better suspect makes a whole lot of people in Peach Coast extremely uncomfortable. People like the mayor, who controls the town’s, and therefore the library’s, budget; those local cops who don’t like having doubt cast on their investigative prowess – and the real killer hidden in the shadows.

Escape Rating B: Peach Coast, like Cymbeline, seems like a wonderful place to visit. One of those places where I wish I knew the town it was modeled on, because it would only be a day trip from home.

This is, after all, the start of a cozy mystery series and Peach Coast sounds so very cozy.

As the story begins, Marvey is very much an outsider in this small town, something that is often the case for detectives, whether amateur or professional, at least in fiction. She’s only been in town for four months, and no matter how long she stays she’ll always be considered a bit of an outsider. Except for being certain that her friend isn’t the murderer, Marvey doesn’t have any preconceived notions of who the murderer might be. But she does need more local knowledge than she has, and that’s where Spence comes in. His roots in the community go back generations, he knows everyone and everyone knows him. While he’s equally certain Jo didn’t do it, there are people in town he is more than inclined to believe are also innocent. That’s not an issue in this case but it might be if the series continues.

One of the things that worked very well in this amateur investigation was the way that all of the things they thought they knew about the victim turned out to be misleading at best and utterly false at worst. Because Fiona was an outsider, and because she tended to keep herself to herself, there was more gossip about her than fact and people believed the gossip because it was salacious.

Shy people are often thought to be arrogant and aloof, and Fiona got lumped into that kind of misjudgment.

The process of the amateur investigation, the one step forward two steps back nature of it, the false starts and hard stops, was done very well, even if a couple of things that happened made me feel like either I missed something or the detectives did. Specifically, we never did really get an explanation of why the local cops so very focused on Jo from the outset. She had zero motive, while the victim was a controversial figure around town to say the least, meaning that the number of people with seemingly excellent motives was rather high – much too high to be ignored by the cops. Something about that part of the scenario smelled rotten. I kept expecting the cops to either be involved or at least have their own motive for their behavior, but we didn’t see it.

That no one, neither the librarian nor the newspaperman nor the cops did any actual investigation of the victim’s life before she moved to Peach Coast felt like an obvious point that got overlooked by, clearly, everyone.

That being said, the whole thing was a lot of fun and I enjoyed following Marvey – and Spence – in the process of finding out who really done it. Also in what looked the very first steps of possibly exploring a relationship beyond mere friendship – or partners in solving crime.

Part of that enjoyment, part of the reason I picked up Murder by Page One in the first place, was that Marvey Harris was a librarian. And she read and felt like “one of us”, which made the book even more fun for this librarian to read and enjoy! (And as a librarian myself, I can’t resist recommending the Georgia B&B series, starting with Peach Clobbered, makes a terrific readalike for Murder by Page One and vice-versa!)

As this is the first book in a new series, I’m looking forward to a return visit to Peach Coast whenever Marvey finds herself involved in another case. 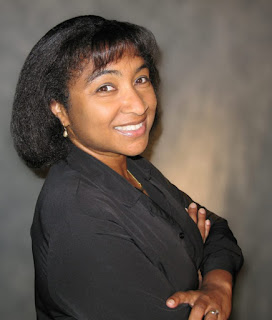 3 thoughts on “Review: Murder by Page One by Olivia Matthews”