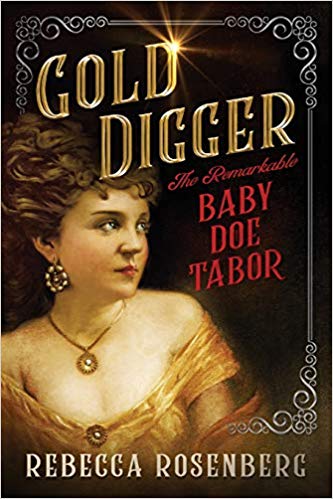 One look at Baby Doe and you know she was meant to be a legend! She was just twenty years old when she came to Colorado to work a gold mine with her new husband. Little did she expect that she’d be abandoned and pregnant and left to manage the gold mine alone. But that didn’t stop her!

She moved to Leadville and fell in love with a married prospector, twice her age. Horace Tabor struck the biggest silver vein in history, divorced his wife and married Baby Doe. Though his new wife was known for her beauty, her fashion, and even her philanthropy, she was never welcomed in polite society.

Discover how the Tabors navigated the worlds of wealth, power, politics, and scandal in the wild days of western mining.

Gold Digger tells the true story of Lizzie “Baby Doe” Tabor, a beautiful young woman who in 1878 marries the son of a wealthy miner in order to save her family from penury. Shrewd and stubborn, Lizzie fights back-biting Victorian society, wins and loses vast fortunes, and bests conniving politicians in her larger-than-life story. A twisting tale worthy of Mark Twain, with a big-hearted heroine at the center. —MARTHA CONWAY, author of The Underground River

Mark Twain once said that “Truth is stranger than fiction, but it is because fiction is obliged to stick to possibilities;Truth isn’t.” There are plenty of variations on this quote, but the one by Twain is particularly apropos to this story as it was written in 1897, during the time period covered by this chapter of Baby Doe’s life.

Her real life. Because even though Gold Digger is a novel, it is based on the life of a real person, Lizzie “Baby Doe” Tabor. A person who became a legend, even in her own lifetime.

Baby Doe’s life was a rags to riches story, in the best Western tradition. But, and it turned out to be a very big but, her life turned back into rags, as so many did when their fortunes rose and fell with the price of gold, or in her case silver, and on the vicissitudes of governments and the claiming and production of always chancy mines.

Because Baby Doe was not just a woman but a beautiful, intelligent and ambitious woman at a time when women who were the first were supposed to hide the second and third, and in a place where women of any kind were rare and as hardened as the men, the life she led and the legends that followed her are heavily influenced by those attitudes.

That she used her beauty and ambition to seduce or ensnare – at least as her contemporaries saw it – a married man who possessed both wealth and political ambition did not endear her to those contemporaries.

That at least according to this book she sincerely loved him, and that she certainly stuck with him through thick and thin – and there was plenty of both – may lend credence to the romantic parts of this story. She certainly stood by him when plenty of others didn’t.

But this is her life – or at least the biggest part of it. And it’s a life well worth learning about – and remembering.

Escape Rating B: I have some mixed feelings about this re-telling of Baby Doe Tabor’s story. On the one hand, her life was absolutely legendary. It makes for the sort of story that would be labeled highly implausible if it were purely fiction. As the fictionalization of a true story, it’s a marvel. The treatment of her life story, both contemporaneously and after her death, is a reflection on the way that the lives of exceptional women are so often dealt with. She was vilified as a homewrecker – and worse – during her lifetime and erased after the fact.

Her story is well-known in Colorado where she lived, but not outside her old stomping – and mining – grounds.

So on the one hand her story is one very much worth telling.

But this telling of it gave me a bit of pause. Attempting to get inside the head of a historical figure, even in fiction, doesn’t always work. (One of the things that worked well for me in yesterday’s book was that the author did not attempt to get inside Princess Margaret’s head. We saw what she did, and other people’s reactions to it, but we didn’t hear her thoughts and that felt right.)

We spend a lot of time in Baby Doe’s head, and her thoughts as presented owed more to historical romance than history – or so it felt to me. And her internal dialog felt a bit overblown – although that matches with writing of her time period. Leaving this reader a bit torn.

In the end, Baby Doe’s life is one that should be better known, and I would be interested in knowing more about. But this particular treatment didn’t quite work for me.

Your reading mileage, whether by car or mining cart, may definitely vary.

For a chance to win a copy of this book and other related prizes, please use THIS LINK to fill-out the Rafflecopter widget. 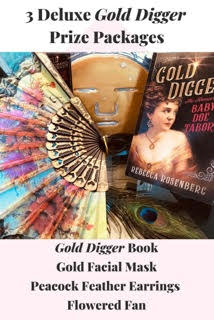