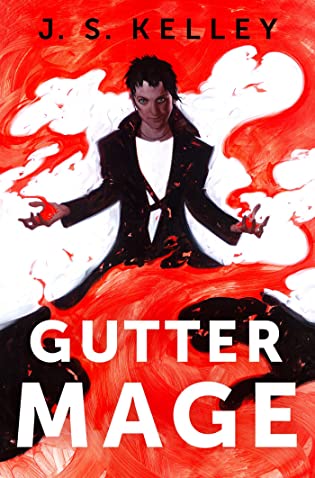 Fantasy and hardboiled noir in this fast-paced, twisting tale of magic, mystery, and a whole lot of unruly behavior.
In a kingdom where magic fuels everything from street lamps to horseless carriages, the mage guilds of Penador wield power equal to the king himself. So when Lord Edmund’s infant son is kidnapped by the ruthless Alath Guild, he turns to the one person who’s feared by even the most magically adept: Rosalind Featherstone, a.k.a. the Gutter Mage.
But as Roz delves into the circumstances behind the child’s disappearance, she uncovers an old enemy from her traumatic past and a long-brewing plot that could lead to the death of countless innocents, as well as the complete collapse of Penadorian society itself!

Is it still urban fantasy if it isn’t set in our world? That’s a question I’m still very much puzzling over after finishing Gutter Mage, because this story has all the gritty, noir feels of urban fantasy, even if the cities of Drusiel and Monaxa are in a place called Penador and nowhere in the world we know.

Not that Drusiel, in particular, doesn’t remind me of other gritty fantasy cities, like Kirkwall and Ankh-Morpork, places where trouble brews in back alleys, disreputable taverns, and in the halls of power and powerful guilds alike.

The story of the Gutter Mage begins in the only disreputable tavern that has not yet barred Arcanist Rosalind Featherstone from its dingy but not disgusting premises. Roz is the Gutter Mage herself – but she’ll deck you if you call her that. Or set you on fire. Or both. Probably both.

Roz is a mercenary, an investigator into magic gone wrong, and a woman who seems to be doing her best to destroy herself one brain cell at a time. She is most emphatically NOT a mage – because the powerful mage guilds threw her out on her ear when her mentor abused her in the worst way possible.

He turned her into a weapon of fire. And she burned him to death for it, along with every other mage who participated in the ritual that put fire literally in her hands.

But someone has kidnapped a nobleman’s newborn baby for a magical ritual that isn’t supposed to exist. Then again, when Roz investigates, it starts to look like the baby doesn’t exist either. And on Roz’ other burning hand, it looks a lot like her former mentor is alive, and well, and planning to enact a ritual that is supposed to be a myth and an allegory, and not a real ritual at all.

Just like the one that put the fire in Roz’ hands. This time, her old nemesis has much bigger plans. He’s not just going to screw up one person’s life – he’s going to bring down the magic that keeps the entire kingdom going.

If Roz doesn’t stop him first.

Escape Rating A-: Gutter Mage is just a surprise and a dark delight of a book. I got captured by Roz’ bar brawl at the very beginning, and just could not read fast enough from there. The story is a blend of dark and gritty urban fantasy, mixed with just a bit of dark and gritty sword and sorcery – although way more sorcery than swords – and a scope that keeps getting bigger and broader even as the story tightens its focus on Roz, her self-destructive tendencies, her property destroying talent – or curse – and her need to put a stop to the man who used her and broke her.

This is a story that starts out small, as many urban fantasies do. Roz and her business partner and best friend Lysander are hired to solve a kidnapping and retrieve the victim – an infant who is so new that his mother hasn’t healed from his birth yet. The case looks easy. They even have a suspect for the crime – a mage guild who claims that the baby is integral to a ritual they plan to perform.

Except that every person they interview contradicts everyone else. There’s too much that just doesn’t make sense. It’s all so obvious that it’s obvious that it’s a setup. A setup that Roz figures out part of relatively easily. It’s just that Roz should have remembered that old saying about when something is too good to be true, and you’re not sure who the chump is, it’s you.

But the reveals are what make this thing so much fun. And where the story expands in scope. Because Roz learns that she might not be who she thinks she is. Also that the guilds and the powers that be are even more evil than she believed they were, even though she starts the story certain that they are all pretty much the WORST. The first thing is life altering. The second might be world destroying – and the world might even deserve it. On top of those revelations, there’s one more, the knowledge that, from a certain twisted point of view – that of Roz’ former mentor – it’s all Roz’ fault, for reasons that I wish had been a bit less clichéd. But the stakes ended up being so damn high that it doesn’t really matter. Except to Roz.

Gutter Mage reminded me a lot of The Blacktongue Thief and The Moonsteel Crown. Both have that same dark feel to them, both of them also feature protagonists who are more antihero than hero, and both revolve around self-deceptive characters who need to save the world anyway – even if they’re not remotely certain they want to save themselves. And both are series openers, and I really hope that Gutter Mage is as well.

Because, like both of those books, Gutter Mage reads like the start of something new and big and exciting. And I can’t wait to read where it goes.