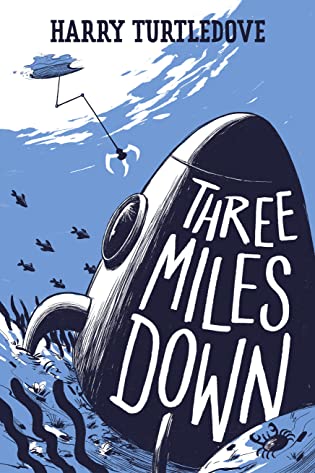 From New York Times bestselling author Harry Turtledove, the modern master of alternate history, a novel of alien contact set in the tumultuous year of the Watergate scandal.
It's 1974, and Jerry Stieglitz is a grad student in marine biology at UCLA with a side gig selling short stories to science fiction magazines, just weeks away from marrying his longtime fiancée. Then his life is upended by grim-faced men from three-letter agencies who want him to join a top-secret "Project Azorian" in the middle of the north Pacific Ocean—and they really don't take "no" for an answer. Further, they're offering enough money to solve all of his immediate problems.
Joining up and swearing to secrecy, what he first learns is that Project Azorian is secretly trying to raise a sunken Russian submarine, while pretending to be harvesting undersea manganese nodules. But the dead Russian sub, while real, turns out to be a cover story as well. What's down on the ocean floor next to it is the thing that killed the sub: an alien spacecraft.
Jerry's a scientist, a longhair, a storyteller, a dreamer. He stands out like a sore thumb on the Glomar Explorer, a ship full of CIA operatives, RAND Corporation eggheads, and roustabout divers. But it turns out that he's the one person in the North Pacific who's truly thought out all the ways that human-alien first contact might go.
And meanwhile, it's still 1974 back on the mainland. Richard Nixon is drinking heavily and talking to the paintings on the White House walls. The USA is changing fast—and who knows what will happen when this story gets out? Three Miles Down is both a fresh and original take on First Contact, and a hugely enjoyable romp through the pop culture, political tumult, and conspiracies-within-conspiracies atmosphere that was 1974.

This was fun. Actually, it was considerably more fun than I expected. Although I wasn’t expecting The Hunt for Red October and every UFO story that takes place at Area 51 to have a book baby, either. But they did and this is definitely it.

It’s the summer of 1974 when this story opens, and does it ever feel like it. Watergate was in high gear, but the infamous tapes had not yet been released. Meaning that there was still plenty of room for people to believe that Nixon was being railroaded. There were also plenty of people who just didn’t like “Tricky Dick” and were happy to see him fall from grace – whether he was being railroaded or not.

The Cold War was still lukewarm at this point. It wouldn’t officially end for another decade, so the US and the USSR are still locking horns, but mostly on the diplomatic front. And the US is still stuck in the deeply unpopular and divisive Vietnam War, although there were certainly signs that the government of South Vietnam was teetering and that the US wouldn’t be able to prop it up for much longer.

Jerry Stieglitz was a graduate student at UCLA, very much like the author. But Jerry’s research for his doctorate in marine biology was about whalesong. If he ever managed to finish it. An issue that is even more in doubt after a visit from the CIA with an offer of the kind of money a graduate student can’t afford to turn down to do a job that sounds more like a boondoggle than anything that will advance his research.

It’s also going to be hell on his love life. Jerry and his fiancé Anna have their wedding all planned – and paid for – to take place in just three weeks.

The CIA wants Jerry on a research vessel in the Pacific Ocean starting ASAP. He thinks he’s part of their cover story. That research vessel is carrying some specialized equipment, to let the CIA raise a sunken Russian submarine from the titular “three miles down” under the ocean.

It’s only after Jerry is aboard ship and they’re on their way to the crash site that Jerry learns that he’s been brought aboard, not for the cover his marine biology research provides, but for the twists of mind necessary for his side-gig.

Jerry is a published (although not very much, yet) science fiction writer. Which makes him perfect for the real mission, hidden under the fake mission, concealed by a really thin cover story about mining manganese from the ocean floor.

It’s Jerry’s job to anticipate all the things that might go wrong when the ship brings up its real prize – a UFO that crashed under the waves who knows how and who knows when. All that anyone knows is that the UFO, whether crewed or not, managed to bring down that Russian submarine all by its lonesome.

Whatever is in there, the US wants to nab for itself before the Russians learn the truth about who sunk their nuclear equipped submarine.

Bringing up the UFO is the adventure of a lifetime. What Jerry finds in it will change, not just his life but quite possibly the world. But he doesn’t believe the US should be opening this particular can of worms on its own.

The problem is that if Jerry tells anyone what they found, somebody really will kill him. But they’ll have to catch him first.

Escape Rating A: Three Miles Down is fun on three different levels. First, there’s the obvious, the golly gee-whiz-bang fun of finding that UFO. It’s an edge-of-the-seat adventure that makes the reader feel like they are right there with Jerry and the crew – even if it’s also a boy’s only club. Which, to be fair, it would have been in 1974.

But just the idea of that discovery is fascinating – and all too easy to imagine for anyone who loves science fiction. Which leads directly to that second level. Because the story feels like it’s intended as a love note to the SF genre, particularly as it was at that period. (I was in high school when the book takes place, and I remember reading – or at least thinking about reading – many of the exact same books that Jerry reads on the trip. And the inclusion of real-life science fiction writer Jerry Pournelle in that latter part of the story reads as spot-on.)

And then there’s that third level, when Jerry’s situation goes pear-shaped and he finds himself on the run in the best spy thriller tradition, trying to keep one step ahead of the people who are out to get him. A part of the story that also flips the espionage thriller on its head, as Jerry, an American, is on the run from the CIA so that he can give the secret to America’s enemies. AND HE’S DOING THE RIGHT THING!

Put all those elements together and this story is an absolute blast from beginning to end, with an ending that opens up the possibility for so many wonderful new beginnings. I’d love to know what happens next, because I really enjoyed following Jerry’s “Magic Carpet Ride” of a journey.

2 thoughts on “Review: Three Miles Down by Harry Turtledove”