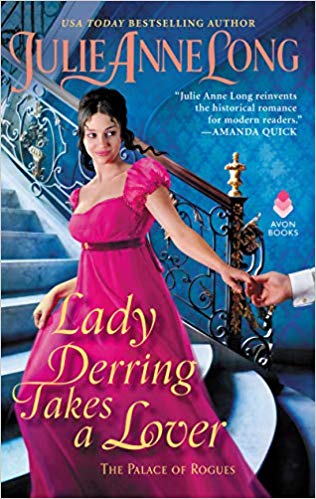 A mistress. A mountain of debt. A mysterious wreck of a building.

Delilah Swanpool, Countess of Derring, learns the hard way that her husband, "Dear Dull Derring," is a lot more interesting—and perfidious—dead than alive. It's a devil of an inheritance, but in the grand ruins of the one building Derring left her, are the seeds of her liberation. And she vows never again to place herself at the mercy of a man.

But battle-hardened Captain Tristan Hardy is nothing if not merciless. When the charismatic naval hero tracks a notorious smuggler to a London boarding house known as the Rogue's Palace, seducing the beautiful, blue-blooded proprietress to get his man seems like a small sacrifice.

They both believe love is a myth. But a desire beyond reason threatens to destroy the armor around their hearts. Now a shattering decision looms: Will Tristan betray his own code of honor…or choose a love that might be the truest thing he's ever known?

Lady Derring Takes a Lover is absolutely delightful. And it was exactly what I was in the mood for, which made it even better.

In a way, this story reminds me of Someone to Love by Mary Balogh – which is high praise considering just how many “best of the year” lists that book turned up on!

There’s a similarity between the two books because they both effectively begin with Dickens’ Christmas Carol opening, “Marley was dead: to begin with.” Because both stories have their effective beginning with the death of someone else.

To make them resemble each other even more, there’s nothing “dear” about the lately departed in either Someone to Love or Lady Derring Takes a Lover. In both cases, the late and unlamented was a bastard. Not the literal kind, but the kind that leaves disaster in his wake.

In the case of “Dull Derring”, he’s left behind a mountain of unpaid bills, a destitute Countess and an equally destitute mistress. I do not mean destitute in the relative sense of having to scale back their extravagant lifestyles. I mean completely skint. Stony broke. Not having two pence to rub together.

But they do manage to rub along together, surprisingly enough. They shouldn’t have anything to do with one another, the lady and the courtesan. They should hate, or at least resent, each other on sight.

Instead they band together, both broke but not in the least heartbroken, and both completely disillusioned with men and the world that believes their only existence should be in relationship to some man who will expect them to suppress their wants and needs and personalities to flatter his ego while leaving them to clean up his messes.

Delilah Swanpool, the “Lady Derring” of the title, has one and only one asset – along with the jewels that her late husband’s mistress, Angelique Breedlove, advises her to sew into the hems of her dresses on her way out the door. Derring owned one building outright, in his own name, not entailed to his estate and not mortgaged beyond its value. Free and clear.

And located on the Thames docks. Not the most salubrious neighborhood, not even for Mrs. Breedlove, let alone Lady Derring. But it’s what they have. It’s all they have except grit and determination and a strong desire to never be dependent on any man ever again.

Their dream of opening a wholesome boarding house in an area that is much more likely to host a brothel – in fact their building used to BE a brothel – seems naive, and is almost doomed from the outset.

Their determination not to depend on any unreliable man – and in their opinion ALL men are inherently unreliable just by being men – is undermined, at least for Lady Derring, with the advent of Captain Tristan Hardy of the King’s Blockade into their attempt to create a bit of domestic bliss for the assortment of people who find their little out of the way genteel boardinghouse.

Because Derring owned that old building in that odd location for a reason. A reason that put the late unlamented squarely in the sights of the Blockade. Hardy knows that Derring was up to his mortgaged neck in smuggling, and he’ll do anything to roll up the last big smuggling gang in England.

No matter how many heads, or hearts, he has to break in the process. Including his own.

Escape Rating A: This is one of those books that just plain is a great time for the reader. I had a blast. Until 2:30 in the morning, because I was having too much fun to stop before the end.

At the beginning, I said this reminded me of the utterly awesome Someone to Love in the way that it starts. But Delilah also reminded me a bit of one of my favorite heroines, Amelia Peabody Emerson, from Elizabeth Peters’ historical mystery series that begins with Crocodile on the Sandbank. Not in time or place, because the stories are more than half a century apart, but in attitude.

Although it is never stated outright, it’s clear from context that Lady Derring Takes a Lover takes place during the reign of George IV, the former Prince Regent who gave his title to an era. Both Delilah Swanpool and Amelia Peabody know how women are supposed to think and act, the way that they are supposed to behave. And both reject those “supposes” and “oughts” and “shoulds”, albeit under different circumstances. And both find themselves liberated by that rejection. Also both want to be seen for who they are and as they are, and not as society, particularly men, believe they should be.

Also they both discover that they really like sex, even though neither expects to and both have a difficult time discussing the act – but definitely not a difficult time doing it and thoroughly enjoying it. Whether they should or not.

There are three stories going on in Lady Derring Takes a Lover, and they play off each other and intertwine with each other in ways that really worked for me.

There’s the obvious, Lady Derring does indeed take a lover. But the romance between Delilah and Tristan, while filled with sexual tension and coming to a well-deserved happy ending, doesn’t feel like the heart of the book.

The two parts that do feel like that heart are the creation of Delilah and Angelique’s desperate business partnership, along with their surprising creation of their boarding house, and Tristan’s quest to find the smugglers – a quest which reminded me a bit of last week’s The Woman in the Lake, because we again see smugglers not as romantic antiheroes, but as members of organized crime.

I loved the way that Delilah and Angelique end up in business together. They’re desperate and cynical and scared and determined to make a home not just for themselves but for others. They build a strong friendship from a very unlikely beginning and it just works. The way they take in such a disparate bunch of people and weave them into an unlikely family of choice was fun to read, in spite of them also being taken in by two of their boarders.

They have a dream that they make come true – without the help of man to make it all come together.

And while Tristan’s hunt for the smugglers was certainly the stuff of derring-do (pun intended, because the late Lord Derring mostly didn’t) it’s a story that wove itself around everything else – as well as providing the crisis necessary to push for the HEA. And I’m equally glad that the crisis did not involve the heroines in jeopardy, as such crises do entirely too often.

There’s a niggling voice in the back of my head saying that this delightful froth of a book played much too fast and loose with historical accuracy – but I can’t prove that. And I enjoyed it so much that I don’t care nearly as much as I should.

A good time was definitely had by this reader. I can’t wait for the next book in the series, Angel in a Devil’s Arms – which looks to bring about Angelique’s much deserved HEA. 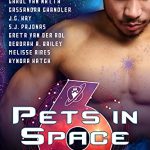