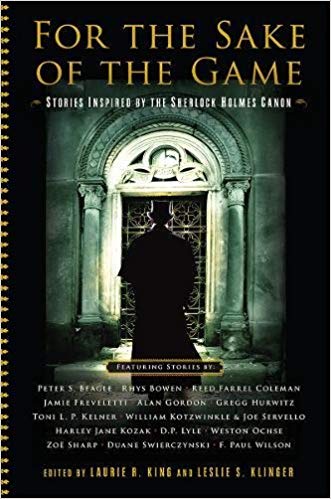 For the Sake of the Game is the latest volume in the award-winning series from New York Times bestselling editors Laurie R. King and Leslie S. Klinger, with stories of Sherlock Holmes, Dr. Watson, and friends in a variety of eras and forms. King and Klinger have a simple formula: ask some of the world’s greatest writers—regardless of genre—to be inspired by the stories of Arthur Conan Doyle.

The results are surprising and joyous. Some tales are pastiches, featuring the recognizable figures of Holmes and Watson; others step away in time or place to describe characters and stories influenced by the Holmes world. Some of the authors spin whimsical tales of fancy; others tell hard-core thrillers or puzzling mysteries. One beloved author writes a song; two others craft a melancholy graphic tale of insectoid analysis.

This is not a volume for readers who crave a steady diet of stories about Holmes and Watson on Baker Street. Rather, it is for the generations of readers who were themselves inspired by the classic tales, and who are prepared to let their imaginations roam freely. 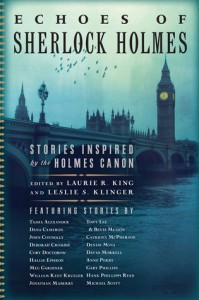 The stories in all of these collections were inspired by Holmes, one way or another, and are commissioned for the collections. And like all collections, they are a bit of a mixed bag. The game, however, is definitely afoot, both in stories that feel like they could be part of the original canon, and in stories that take their inspiration from the Great Detective without necessarily featuring him in either his Victorian guise or a more contemporary one.

I have several favorites in this year’s collection, one each to reflect the different aspects of Holmesiana that are represented here.

My favorite story in the manner of the master himself The Case of the Missing Case by Alan Gordon. It takes place before the canon begins, when Mycroft is still working his way up the government ladder, and Sherlock, in his very early 20s, has not yet taken up rooms with Watson. And is not yet quite as sure of himself and his methods as he will later become. It actually fits quite nicely into the period between the excellent Mycroft and Sherlock by Kareem Abdul-Jabbar and Anna Whitehouse, and the beginning of the official canon.in A Study in Scarlet.

In this story we see a very young Sherlock justifying his continuing presence in London to the consternation of his parents and the absolute chagrin of brother Mycroft by solving the case of a missing violinist and saving his brother’s life. This story also provides a rather lovely explanation for Sherlock’s acquisition of his famous Stradivarius.

This collection has relatively few Holmesian stories set in the Victorian era. Most are either modern variations of Holmes – or modern detectives, whether amateur or professional, who use Holmes’ methods.

Of the contemporary Holmes stories, I can’t decide between Hounded by Zoe Sharp and The Ghost of the Lake by Jamie Freveletti. They are such completely different versions of the 21st century Holmes that choosing between them is impossible.

Hounded by Zoe Sharp is so much fun because it is a contemporary reworking of The Hound of the Baskervilles. It shows just how timeless the canon can be, by transplanting from the 19th century to the 21st and still making it all, including the ghostly hound, work.

The Ghost of the Lake, on the other hand, is a 21st century version of Holmes that owes a lot to both Elementary and Sherlock without feeling like an imitation of either. In this story, Sherlock Holmes is a 21st century operative for a secret British government department who has come to Chicago to prevent the kidnapping of an American national security specialist who has plenty of tricks up her own sleeve – and who is every bit Holmes’ equal in every way.

I liked, not only the portrayal of Holmes in this story, but also the character of Dr. Hester Regine. And I loved the trip down memory lane to Chicago, my favorite of all of the places that we have lived.

Last but not least, the story that took the phrase “inspired by Sherlock Holmes” to new heights. And depths. And several places in between. That would be The Adventure of the Six Sherlocks by Toni L.P. Kelner. This story both spoofs the love of Holmes and celebrates it at the same time, as its amateur detectives find themselves using Sherlock Holmes’ own methods to investigate a murder at a convention of Sherlock Holmes fans.

The story reminds me a bit of Bimbos of the Death Sun by Sharyn McCrumb, where an author is murdered at a science fiction convention – but if “Six Sherlocks” uses that book as a springboard, it’s a very light spring.

Even the idea of a cooking show featuring actors portraying Holmes and Watson is hilarious. But when someone murders “Holmes” at the Sherlock Holmes convention, there are too many pretend Sherlocks and nearly not enough real ones to crack the case. This one is a light and fun send up of fan conventions in general and Sherlock Holmes mania in particular as well as being a cute mystery. 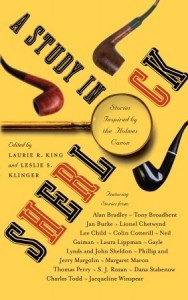 Escape Rating B+: Overall I enjoyed this collection. There were a couple of stories that just weren’t quite my cuppa, and one or two where it felt like they were a bit too far off the Holmesian tangent to be in this collection.

I read it in a day, finding myself getting so caught up in each story that I almost finished before I knew it. If you like Holmes or Holmes-like or Holmes-lite stories, this collection is every bit as much of a treat as its predecessors.

Of all the stories in all these collections, the one that still haunts me is from the first one, A Study in Sherlock. It’s The Case of Death and Honey by Neil Gaiman, and it’s the one that I still most want to be true.

Stacking the Shelves (57)
The Pirate King