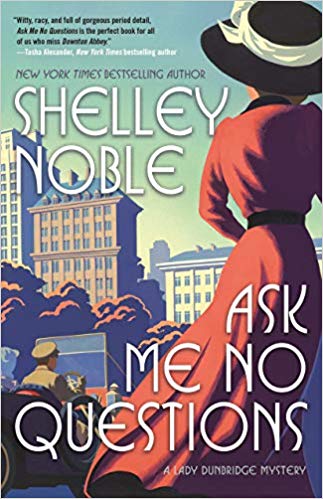 A modern woman in 1907, Lady Dunbridge is not about to let a little thing like the death of her husband ruin her social life. She’s ready to take the dazzling world of Gilded Age Manhattan by storm.

From the decadence of high society balls to the underbelly of Belmont horse racing, romance, murder, and scandals abound. Someone simply must do something. And Lady Dunbridge is happy to oblige.

Although this is the first book in a new series, it has a bit of the feeling of starting in the middle (in a good way), as Lady Philomena Dunbridge seems to have already solved at least one mystery ahead of the police when we first meet her. In London. Being lectured to and ordered about by her father.

Who seems to have forgotten that Phil is a widow of independent means, and no longer under his control. He also doesn’t seem to understand just how determined she is to stay that way.

In her determination, Phil takes herself off to America to stay with her best friend, Beverly Reynolds. Phil is hoping that Bev’s membership in the smart set of Gilded Age New York City will provide her with the entree that she needs into New York high society.

And far, far away from the stultifying traditions of “jolly olde England” where she will be forced, one way or another, to occupy the place reserved for dowager countesses. At 30ish, Phil is much, much too young to be a dowager, or to put herself on any kind of shelf.

She comes to New York to live.

Only to be greeted at the dock by the corpse of Bev’s husband, leaving her with a mystery to solve.

That Reggie Reynolds was shot by Bev’s gun would automatically make her a suspect, even if he hadn’t been found in the arms of his mistress.

At first, the police seem determined to pin Reggie’s murder on either Bev or the mistress. And while Phil has no compunctions about letting the poor floradora girl face the music if she’s guilty, it doesn’t seem possible. Especially when a second dead body turns up in Bev’s library, also shot with her gun.

And that’s where the story goes off to the races. Literally. Because Reggie had a horse running at Belmont, and Devil’s Thunder was favored to win. Favored to win enough that all of Reggie’s many, many creditors should have been paid off.

Unless, of course, that was the point of his murder after all.

Escape Rating A-: Phil reminds me a great deal of Phryne Fisher, and for this reader, that’s an excellent thing. Although the Lady Dunbridge series is set in Gilded Age New York, as is Joanna Shupe’s marvelous Four Hundred series, it’s Phil’s likeness to Phryne that sticks in my mind. And also more than a bit of Lydia Kang’s excellent A Beautiful Poison)

And while Phil does not bed hop to the degree that Phryne does, it is clear that she also takes her pleasures where she finds them, if a bit more discreetly than her Australian counterpart.

Phil has also become an amateur detective, although in her first official outing she is still at the point where she becomes involved because a friend – and also herself – are under threat of being embroiled in the police investigation. She’s not yet taking paying clients – although there’s a hint that she may have an unofficial, semi-official paying client in future books.

What makes Phil so much fun is that she definitely has all of her wits about her, and never, ever looks down her nose at anyone who might be able to help her in her investigations. Like her butler and her lady’s maid, both of whom seem to be quite a bit more than they seem.

I simply had a lot of good fun with Phil, much as I do with Phryne. If you enjoy historical mysteries featuring intelligent and cynical female detectives, this is a real gem and I sincerely hope the series continues. Soon.

3 thoughts on “Review: Ask Me No Questions by Shelley Noble + Giveaway”