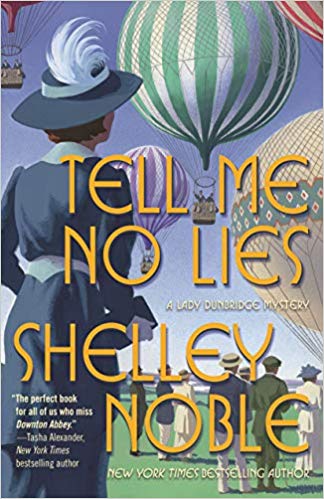 Rise and shine, Countess, you're about to have a visitor.

Lady Dunbridge was not about to let a little thing like the death of her husband ruin her social life. She's come to New York City, ready to take the dazzling world of Gilded Age Manhattan by storm. The social events of the summer have been amusing but Lady Phil is searching for more excitement---and she finds it, when an early morning visitor arrives, begging for her help. After all, Lady Phil has been known to be useful in a crisis. Especially when the crisis involves the untimely death of a handsome young business tycoon.

His death could send another financial panic through Wall Street and beyond.

With the elegant Plaza Hotel, Metropolitan Museum of Art and the opulent mansions of Long Island's Gold Coast as the backdrop, romance, murder, and scandals abound. Someone simply must do something. And Lady Dunbridge is happy to oblige. 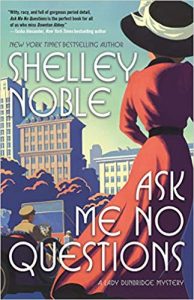 I picked up Tell Me No Lies because I really enjoyed the first book of Lady Dunbridge’s adventures, Ask Me No Questions. And yes, I sense a theme in those titles and I’m wondering where it goes from here. The (presumably) original Oliver Goldsmith quote, from his play She Stoops to Conquer, just say “Ask me no questions, and I’ll tell you no fibs.” Close enough.

So, here we have the delicious fun of Tell Me No Lies. And it is definitely delicious – and that’s no fib at all. And fun. Also deadly. But Lady Philomena Dunbridge, Phil to her friends and readers, is there to save the day.

Where in Ask Me No Questions Phil literally walked into the murder, and is caught in the middle of the investigation because she needs to get her friend Reggie and herself out of the frame that they have definitely been placed in, she has spent the several months since those events researching the proper procedures for conducting investigations, with the able assistance of her supposed servants, Preswick and Lily.

All in order to be of future assistance to the charming, mysterious Mr. X who is paying Phil’s rent in exchange for future investigative services – and possibly more.

Phil’s involvement with this new case is a direct result of the previous. High society in Gilded Age Manhattan is rather a tight circle, and Phil has developed a reputation for saving reputations where such is warranted. The morning after Phil’s attendance at the sparkling debut ball for debutante Agnes Pratt, Mr. Luther Pratt, the debutante’s father, appears at Phil’s door to request her immediate return to the scene of the festivities.

The corpse of one of the other guests has been found in the laundry. It’s up to Phil to figure out just how the man ended up dead, and whether the deed was done by one of the well-heeled guests or one of their respectable servants. But better a servant than a guest – especially since the guests were all important titans of banking and industry, and a scandal amongst them could precipitate a further destabilization of the volatile stock market.

Little do they know that it’s already too late for most of them to save themselves from either the investigation, the fallout, or the impending crash.

All Phil can do is make sure that only the guilty are punished for the crime. As soon as she can figure out the who, the how and most especially the why of it all. No matter how important the man who stands in her way.

Escape Rating A-: I enjoyed Tell Me No Lies every single bit as much as I did Ask Me No Questions. I absolutely adore the character of Phil, her perspective is witty and trenchant and just the right amount of cynical. That she reminds me very much of Phryne Fisher is certainly a plus.

Howsomever, I do have just a couple of quibbles. The blurbs describe this series as Miss Fisher (presumably of Miss Fisher’s Murder Mysteries) meets Downton Abbey. Those same blurbs also set the series in Gilded Age New York City. There’s truth in those descriptions, as well as more than a bit of hyperbole.

Also more than a hint of misdirection. This entry in the series in particular is set in late October, 1929. As the story opens, the talk of the town is that J.P. Morgan and his business associates have just attempted to stop the fall of the banks by injecting millions of dollars of their own money into the system. (This really happened.) But their efforts were doomed to fail, a fact that is fairly obvious in the background of the story.

In other words, this story takes place in the days, the very last days, before Black Tuesday, October 29, 1929, the day the stock markets fell in a crash that had been anticipated for over a month – and was certainly both feared and foreseen by the many financiers in this story.

So not actually the Gilded Age, but the glorious excess of that Gilded Age probably sounds more lively than the Great Depression. Not that this book isn’t plenty lively in spite of the shadows of doom. Phil is guaranteed to put plenty of life into any party.

Also there’s not so much of Downton Abbey here. Not just because the story is set in New York, and service in the U.S. was never nearly as entrenched as it was in Britain, but also because Phil exists between the classes. By birth she is upper class, but she is also living by her wits. She knows how the upper class thinks and functions – at least back home – but she isn’t exactly a part of it the way the Crawleys are. And certainly her two loyal retainers, the butler Preswick and the lady’s maid Lily, are much more partners-in-solving-crime than they are servants in any traditional sense.

But the strong resemblance to Miss Fisher, Miss Phryne Fisher, is definitely present. Phil and Phryne would either get along like the proverbial house on fire, or would fight like two cats over the same territory – and possibly the same men. They are very much alike in perspective and attitude.

And Phil’s handsome cop with somewhat of a stick up his ass, Detective Sergeant John Atkins, is a dead ringer for Detective Inspector John “Jack” Robinson, at least as portrayed by Nathan Page in the TV series. With zero resemblance (by either) to the same character in the book series. The flirtation between Atkins and Phil certainly furthers the likeness.

At the beginning I referred to the Oliver Goldsmith quote as the source – so far – of the titles for this series. But there’s a Lynyrd Skynard song has a few more lines that might be relevant later.

4 thoughts on “Review: Tell Me No Lies by Shelley Noble + Giveaway”