RITA-winner Susan Grant is back with an all-new, stand-alone tale of two improbable lovers, their daring secret, and the gamble destined to alter the course of their worlds forever.
A desperate woman in need of a miracle—A bad-boy prince in need of redemption
She was playing with fire...
Jemm Aves battles to keep her dreams alive on a dead-end world. Working for the mines by day, she’s a successful bajha player at night, disguised as a male to be allowed to compete in the colony’s dangerous underworld where club owners will go to extremes to retain the best players. Every win puts her one small step closer to her goal: saving enough to escape Barésh with her family. When a nobleman from one of the galaxy’s elite families recruits her to be a star player for his team, it's because he doesn't know her secret. Her ruse proves to be her most perilous game yet when it puts both their lives—and her heart—at risk.
Prince Charming he was not...
Prince Klark is eager to reverse his reputation as the black sheep of the Vedla clan, a family as famous for its wealth and power as it is for being a bastion of male-dominated tradition. If his bajha team can win the galactic title, it would go a long way toward restoring the family honor that his misdeeds tarnished. He travels to Barésh to track down an amateur who’s risen to the top of the seedy world of street bajha, offering the commoner a chance of a lifetime: a way off that reeking space rock for good. But his new player comes with a scandalous secret that turns his plans and his beliefs upside down. He sets out to win a very different prize—his champion’s reluctant heart.

Because I kept conflating this story with the excellent Empress Game by Rhonda Mason, I was kind of expecting that the stakes in The Champion of Baresh would be slightly bigger than they are. And then they actually are, but not quite in the way I thought. And that’s always a good thing. I also kept wondering if this story linked at all to Grant’s Star series. It turns out that it does, but it is not necessary to have read, or to remember in my case, the details of the earlier series to enjoy The Champion of Baresh.

Baresh is a dead-end world, and Jemm Aves has a dead end job – but then all the jobs on Baresh are pretty much dead end, if not downright deadly. Not deadly as in dangerous per se, but deadly as in the working conditions are so totally awful that the job will kill you one way or another if you live long enough, and if you quit the poverty will kill you even quicker.

Think about all the diseases that miners have been proven to get on this planet, and then multiply that by an entire manufactured world that is completely dependent on mining a deadly and necessary ore. That’s Baresh.

And Jemm Aves wants off.

But the only chance she has for getting herself and her family – mother, brother, niece – is to pick up her dad’s old sens-sword and compete in barroom bajha. And the only way to make her way into the bajha circuit, even on a backwater world like Baresh – is to pretend to be a man. Or at least a boy.

The more she wins, the more that the local gangleaders want to tie her down to an exclusive contract. The better she does, the more she earns – and the more dangerous it gets.

Until she’s presented with a once-in-a-lifetime chance to play in the professional leagues. But that’s only possible if she can keep her secret – or find someone else to keep it with her.

Escape Rating B+: In the end, The Champion of Baresh is a love story about breaking down barriers.

The initial barrier that needs to be broken is the custom that says that women can’t play bajha. Think of bajha as a real-life version of the arena fighting video games, with a few changes. Matches are fought blindfolded, and all contestants use the same weapon, a sens-sword that administers a shock rather than a slice. Although there are professional teams, matches are fought one on one. But it’s the combined score of the whole team that leads to the championship.

Of course, the barroom circuit on Baresh is a LOT less formal. There’s only two individuals, and a whole lot of crowd noise. When Jemm, fighting as Sea Kestrel, steps into the ring, she’s the best that Baresh has ever seen. She’s living proof that women can play bajha, and play it well. But she has to compete as a man. Not just because of the social conventions, but because it is way safer for her and her brother/manager if no one knows who she really is. 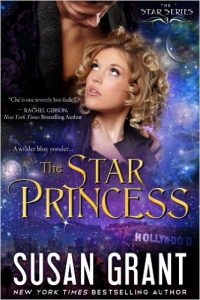 Prince Klark Vedla has a whole lot of barriers to jump over, many of them all by himself. He has to convince himself that this street rat is capable of making the jump to the big leagues, a difficult feat all by itself. Then he has to decide to become complicit in Jemm’s secret, defying not just social convention but his own moral code. He wants to win the Championship for his family to erase the stigma of his own intemperate actions in The Star Princess.

And then Jemm and Klark have to bridge the barrier between street rat and prince-not-so-charming. Two people who have never fallen in love fall for each other, each believing that it can’t possibly work. It takes a wise and somewhat scary old man to get Klark’s head out of his ass on that score.

But as much fun as the romance is in this book, the fun is in breaking down the wall that prevents women from playing bajha. When Jemm’s secret is finally revealed, after a series of stunning victories, the powers-that-be in the sport try to bury everything under the rug, and attempt to keep Klark and his team silent with vague but menacing threats.

Watching Jemm and Klark set their entire sporting world on its ear, by proving that women not only can play bajha, but that they want to play bajha, and that encouraging them to play bajha is good for the sport. In the end the score is Neanderthals 0 and Opening Doors to Opportunity a very satisfying 1.

5 thoughts on “Review: The Champion of Baresh by Susan Grant + Giveaway”