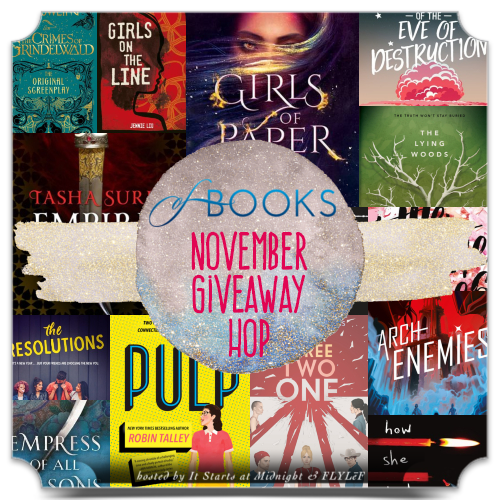 Welcome to the November Of Books Giveaway Hop, hosted by It Starts at Midnight and Flylef!

The question, this month and every month, is what book or books are you most looking forward to this month?

Because of the publishing seasons, November is never as big a month as October, and December usually doesn’t have much at all. In theory, this gives me a chance to get make a tiny dent in the towering TBR pile, but the reality is that I just buy more books and/or get more books that aren’t due out for MONTHS!

Not that I don’t have at least a couple of books that I’ve just been dying for pretty much every month!

This month there are three, and they are all due out the same day, the Tuesday after Thanksgiving. Meaning I’ll have plenty of time to read them over the long Thanksgiving weekend – if I manage to resist temptation that long.

First there’s Kingdom of the Blind by Louise Penny, the 14th book in the Chief Inspector Gamache series. If you like psychological mysteries, combined with a bit of police procedural and featuring a fascinating cast of regulars, this series is a gem. The first book, the one I pretty much throw at everyone who even hints that they like mystery, is Still Life.

The second book is The Mortal Word, the 5th book in the awesome Invisible Library series. Of course I LOVE this series. But it’s not so much about the library as it is the librarian, Irene Adler, her over-the-top adventures and her finally recognized love affair with her supposed assistant, who is a DRAGON!

Last but certainly not least, the 5th book in Mary Balogh’s absolutely lovely Westcott series, titled Someone to Trust. Considering that this entire series begins in Someone to Love when it is discovered that a dead bastard in the metaphorical sense (the bastardy is metaphorical, the death is not) left all of his children bastards in the legal sense, this series has gone some very interesting places and had marvelously heartwarming stories. And the late Humphrey Westcott is still a bastard.

There are also two books that I admit I got for the titles; They Promised Me the Gun Wasn’t Loaded by James Alan Gardner and An Elderly Lady is Up to No Good by Helene Tursten. Although completely different in genre, they both look like fun!

What about you? What book or books are you most looking forward to this month? Answer the question in the rafflecopter for a chance at your choice of a $10 Amazon Gift Card or a $10 Book from the Book Depository!

For more terrific bookish prizes be sure to visit the other stops on the hop!