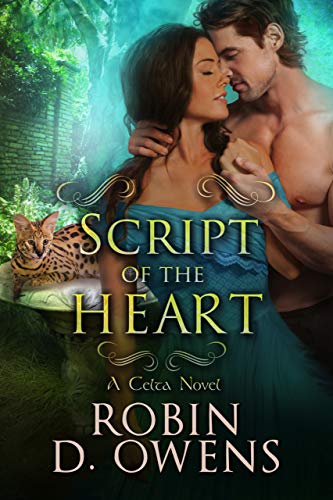 Celta, a place of magic, telepathic animal companions, and romance...Script of the Heart, a story set decades ago, of a couple struggling with love and loss...

Giniana Filix, a dedicated Healer, is desperate to raise funds for an experimental treatment to save her dying FamCat. She has no time or interest in a relationship.

Growing up on an impoverished estate as the last of his line, actor Klay St. Johnswort hears of a script of a lifetime, a script he believes will catapult his career to greatness and enable him to restore his home. Appalled to learn the script has mysteriously disappeared, he is determined to reclaim it at all costs.His desire to be close fuels her fear of abandonment.

Her distrust of actors clashes with his pride in his craft. But they discover a connection they can’t deny. Will their attraction be enough to force them to write their own Script of the Heart?

Sometimes, even though, as the saying goes, it walks like a duck and quacks like a duck, it isn’t actually a duck. The Celta’s Heartmates series is one of those “not a duck” situations, along with Pern, Darkover, Harmony and Markswoman by Rati Mehrotra.

These are all series that read like fantasy and/or fantasy romance, but if you look under the hood – or back in the history of how these places came to be – there’s a space ship lurking in the shadows. Or in the case of Markswoman an apocalypse. And if you’re looking for a book to cross over from one of these genres to the other, something from one of these series might just be your jam.

What I mean is that all of these series feel like fantasy. Their worlds are either lower tech than ours is currently, and/or what tech they have is based on something other than electricity – usually psi power of some kind. The mileage, parsecs and/or warp speed varies.

But these are worlds that have a scientific origin and reverted to a lower level of technology either out of necessity or conscious planning. Usually within the course of the series those origins, if not widely known, are re-discovered.

Celta, in specific, is a lost colony of our very own Earth, in a far-flung future. It was settled by the survivors of three ships from Earth, filled with refugees who left because they were persecuted for their psi-power, called Flair in this series. By the time that Script of the Heart takes place, Celta has been established for centuries. Life on Celta is not perfect (no place is perfect) but it is good for most people most of the time.

Celta also seems like a reasonable place to live. This society seems to actually work and not merely lurch from crisis to crisis. The world creation in this series is top-notch every step of the way. 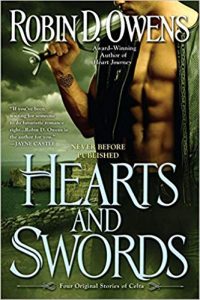 This story, in spite of its designation as #9a in the series, is a full-length novel. But it takes place chronologically during the events of Heart Journey. You don’t need to have read that to enjoy this, but you do probably need to have some other exposure to Celta before diving into Script of the Heart. Starting with either Heart Mate (the first published book in the series) or the story Heart and Sword (included in the Hearts and Swords collection) the first story in the internal world chronology, should be enough to get you hooked.

The course of true love never does run smooth, and that is certainly true in Script of the Heart – along with a rather large helping of “pride goeth before a fall”. Klay St. Johnsworth is a respected actor at the height of his career. He is also the last of his respected but not in the least wealthy line.

Giniana Filix is a respected healer who was abandoned by her family of actors. This has not left her with a very high opinion of the profession, and in some ways rightly so. She’s done her best to make her own way, but at the moment it isn’t quite enough.

Her FamCat, Thrisca, is the “oldest of the old” of the telepathic, highly intelligent FamAnimals that live on Celta. Thrisca is dying. Giniana will do anything to earn enough money to allow Thrisca to participate in an expensive and experimental procedure that might just save her life – if Giniana doesn’t work herself into illness along the way.

Giniana doesn’t have time for romance, or even friendly relationships. She’s working every hour of the day and night to earn the money for Thrisca’s treatment. But that’s when she meets Klay, and can’t make herself resist the actor – no matter how much she distrusts his profession.

It’s mostly Giniana’s pride that gets in the way, as well as her lingering resentments of her family situation. It’s not just that her parents were actors, but that they were profligate with their money, sparing with their affection, and never seemed to put anything before their own careers and especially their own selves. Not even each other and certainly not their daughter.

That her mother spent her life looking for a man to sponge off of has left Giniana with a fear of taking help, at least help in the form of money, from anyone. Even someone she is coming to love.

But Klay has his own pride. He wants to help Giniana. But he needs for her to accept him as he is, because his career is every bit as much a part of him as hers is of her. It’s up to Klay with a little bit of help from her FamCat (and her FamCat’s FamCat) to get Giniana to finally see that sometimes we all need a little help from our friends.

Escape Rating A-: Script of the Heart is simply a lovely romance between two interesting people in a fascinating place.

It’s not just that Klay and Giniana are great people to follow into a romance, but also that their story shows a side of Celta that we don’t see all that often. While many of the stories involve couples who operate at the highest echelons of this society, Klay and Giniana are both in the lower-middle class. They both have to work for a living, and they have to live off what they make. They also have to worry about scrimping and saving and not always having quite enough to meet their everyday needs, even with careful planning.

We’ve seen a few people at the very low end of this society get vaulted into the upper class, but it’s been a while since we’ve followed people in this situation, if ever. It’s impossible not to feel for Giniana and her desperate need to keep her oldest and best friend, her FamCat Thrisca, alive and well if at all possible. Those of us who have companion animals know that feeling of watching a beloved friend slip away and being unable to stop it.

The FamKitten Melis offers the comic relief in this story, as Klay brings her to Giniana in the hopes that Melis may be able to ease her grief if the worst happens to Thrisca. That the old FamCat herself adopts the kitten gives Thrisca a bit of a new lease on life. But the FamCats in general are simply a joy to read. (We have a little kitten of our own right now, and Melis is VERY kitten!)

So a lovely romance, with happy endings all around. Especially for the FamCats!

2 thoughts on “Review: Script of the Heart by Robin D. Owens”