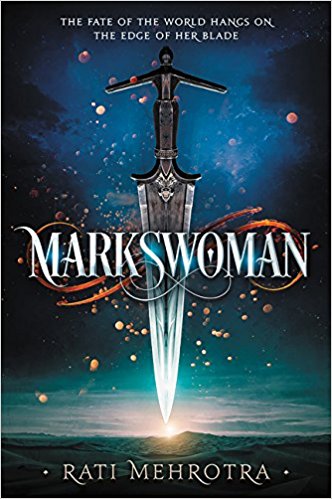 Kyra is the youngest Markswoman in the Order of Kali, one of a handful of sisterhoods of highly trained elite warriors. Armed with blades whose metal is imbued with magic and guided by a strict code of conduct, the Orders are sworn to keep the peace and protect the people of Asiana. Kyra has pledged to do so—yet she secretly harbors a fierce desire to avenge her murdered family.

When Tamsyn, the powerful and dangerous Mistress of Mental Arts, assumes control of the Order, Kyra is forced on the run. She is certain that Tamsyn committed murder in a twisted bid for power, but she has no proof.

Kyra escapes through one of the strange Transport Hubs that are the remnants of Asiana’s long-lost past and finds herself in the unforgiving wilderness of a desert that is home to the Order of Khur, the only Order composed of men. Among them is Rustan, a disillusioned Marksman whose skill with a blade is unmatched. He understands the desperation of Kyra’s quest to prove Tamsyn’s guilt, and as the two grow closer, training daily on the windswept dunes of Khur, both begin to question their commitment to their Orders. But what they don’t yet realize is that the line between justice and vengeance is thin . . . as thin as the blade of a knife. 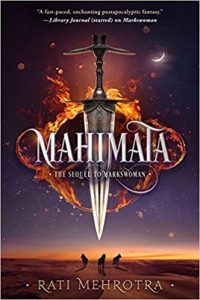 This one sits right on the border between YA fantasy and Adult epic fantasy. I say this as more of a warning, in that the “official” genre designations on both Goodreads and Amazon emphasize the epic fantasy aspects and gloss over the young adult heroine. I enjoyed the book a lot, and am hoping to get an eARC for the second book in the series, Mahimata, but I’m not sure I would have picked it up if I’d known it was YA. So I’m not sorry in the least that I did, but your mileage may vary.

The Asiana series is also part of the “if it walks like a duck and quacks like a duck but isn’t actually a duck” school of fantasy-flavored science fiction. Or, if you prefer, science fiction that feels like fantasy. Like Pern or Celta, worlds that were created or found by science but have either regressed or chosen to live in a way that feels fantasy-like. I suspect that the SFnal origin will come into play later in this series, just as it does in both Pern and Celta.

In the case of Asiana, this world is a far-future, extremely post-Apocalyptic version of quite possibly our own Earth. The Apocalypse in question is so far back in the distant past that it is by this point a matter of myth and legend rather than history, but it is definitely there. The Orders of Peace of which the Order of Kali that Kyra belongs to is one, are known to be descendants of that long ago catastrophe.

More than long enough ago that the rules, regulations, strictures and beliefs have morphed considerably over the centuries. But at their heart lies that long ago, planetary-wide devastation.

But this story takes place in that far-future “present” and focuses on the struggles of the young Markswoman, Kyra.

Markswomen are bonded to their specially forged blades, and serve as peacekeepers, guards, judges and sometimes assassins throughout the world of Asiana. We meet Kyra as she undertakes her first Mark, the death that signifies a change in her status from apprentice to full-fledged Markswoman.

For Kyra it is also a personal quest, as her mark is the son of the man who wiped out her entire clan. It is justice, as his father murdered her clan’s future, she in turn kills his.

But it also marks the beginning of a long journey. One in which Kyra discovers that what she has been taught is not all that it seems – and that betrayal comes most easily from those that are closest to us.

It is a lesson that sends Kyra on a journey across the continent and back, because the person who has been betrayed is Kyra’s teacher and not herself. And Kyra is the only person capable of resetting the balance.

Escape Rating B+: Markswoman is the opening of a terrific epic fantasy – one that is all the better for having its roots somewhere other than the Western traditions that so often flavor epic fantasy.

The story also sits on that dividing line between coming-of-age and coming-into-power. Kyra is on the cusp of becoming a full Markswoman as the story begins. She is uncertain about her place in the Order of Kali and in her world in general. And she has to leave home in order to figure out what her destiny is and where she truly belongs. For most of the story, she is constantly learning lessons – not the formal lessons that comprised her novitiate and apprenticeship in the order, but the life lessons that will allow her to move forward.

One of the hardest, as it so often is, is the lesson about letting go. Not giving up, but of learning which are the battles to be fought and which are the injustices to be forgiven. We feel her indecision, her desperation, her frustration and her impatience. We also feel her need to make things right, and the conflict that brings to her heart.

But, as I said at the beginning, this story lies on the knife edge between YA and epic fantasy. The one place where it slips into YA territory is in its treatment of potential romantic relationships, as it very nearly falls into the dreaded love triangle trap. It doesn’t quite fall, but it gets a bit too close for comfort.

This also leads to wondering about the complete gender segregation of all of the Orders of Peace and how on Earth – or Asiana – that possibly works. Admittedly, we do get hints that it doesn’t. But it does make one wonder how Kyra’s nascent relationship with a Marksman from another order is going to work – if at all – or how much trouble it’s going to get them both into if they survive.

Which leads to my fair warning about the end of the book. Because Markswoman ends on one hell of a cliffhanger. While I wonder what took me so long to read it, I’m also glad that the eARC for the second book is already available. I can’t wait to see what happens next!