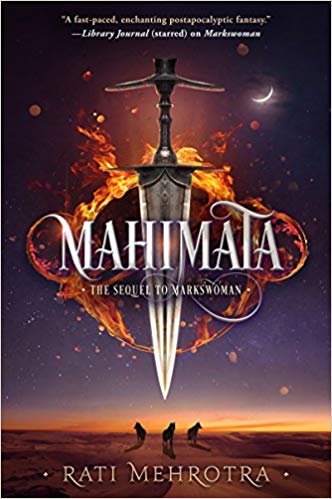 A young female assassin must confront the man who slaughtered her family, risk her heart, and come to terms with her identity as a warrior and as a woman in this thrilling fantasy from the author of Markswoman.

Kyra has returned to the caves of Kali, but her homecoming is bittersweet. She no longer knows what her place is. Her beloved teacher is dead and her best friend Nineth is missing. And gone, too, is Rustan, the Marksman who helped her train for the duel with Tamsyn--and became far more than a teacher and friend.

Shaken by his feelings for Kyra and the truth about his parentage, Rustan has set off on a quest for answers. His odyssey leads him to the descendants of an ancient sect tied to the alien Ones--and the realization that the answers he seeks come with a price.

Yet fate has plans to bring Kyra and Rustan together again. Kai Tau, the man who slaughtered Kyra’s family, wages war on the Orders of Asiana. Hungering for justice, Kyra readies herself for battle, aided by her new companions: the wyr-wolves, who are so much more than what they seem. And determined to keep the woman he loves safe, Rustan joins the fight to ride by her side.

But will this final confrontation ultimately cost them their love . . . and their lives?

The Asiana duology (yes, this is the second of two and there are only two) is set 800 plus years after a global catastrophe on our Earth. This is the story of the fantasy-like (or fantasy-lite) “civilization” left behind after a war that almost literally ended all wars – by wiping out a huge chunk of any population that might fight those wars.

But human beings are stubborn, in both good and bad ways. We came back as a species, and as this story begins, it looks like yet another war to end all wars has already begun – complete with weapons of mass(ive) destruction.

That the guns are called “kalashiks” is kind of a dead giveaway that this is our Earth and not someplace else. It’s not that another race of bipeds won’t/wouldn’t/hasn’t come up with the equivalent of assault weapons, it’s that this reader doubts that said other race would also spawn the languages that gave birth to the name “Kalashnikov”.

I digress and yet I don’t. The long-ago and long-lost past is part of the deep background of this story – and in a strange way also a part of its future. I’ll come back to this in a bit. 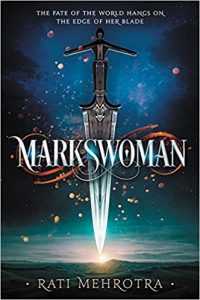 The story in Mahimata is a continuation of the story from Markswoman, and this can’t be read without having read the previous. Nothing will make sense otherwise. I’m actually glad that my reading of Markswoman wasn’t all that long ago, because Mahimata drops the reader right where that book left off.

This is a story where what goes around ultimately comes around, and karma is indeed a bitch. But our heroine Kyra is as much its victim as anyone else in the story.

Once upon a time, a man kidnapped and raped her mother, resulting in, well, Kyra. That same man returned to her mother to kill everyone in her clan, except Kyra. Who is, in the way of such stories, fated to kill him in his turn.

It’s what happens in the middle that makes the story. And one hell of a story it is.

Escape Rating B: I’m giving the rating early so that I can talk about what I did and didn’t like about the book. Because there’s a whole lot of like and not much dislike, except for one thing – which I’ll get to in a minute.

This is a story that put me in that rare approach/avoidance trap. I desperately wanted to know how it ended but I didn’t want it to end. The world that has been created in the wake of exactly whatever the apocalypse was is fascinating. The Orders of Peace, of which our heroine’s Order of Kali is just one of several, are dedicated to keeping the general population of the tribes safe from predators both without and within.

But while their purpose is a noble one, so much of their origin and history has been lost that much of what they have come to believe is neither true nor in the best interests of either the orders or the general population. They’re slowly killing themselves off, leaving the field wide open for a tyrant to bring unity through subjugation. The Orders are no longer strong enough to take care of such problems before they become big ones.

Which leaves our heroine and her friends and companions in a position where they will have to throw away much of what they think they know in order to face a danger which will overwhelm their world if they don’t act.

At the same time, the Asiana duology is also Kyra’s coming of age story. When we began in Markswoman, she was just about to take the step that graduates her from apprentice to markswoman. As her story continues, she finds herself in almost a constant state of examining the acts she has already committed with eyes that have become sharpened by experience.

An examination which often leaves her wondering just how she could have made so many huge mistakes, or have been so much of a fool. Her experiences may not have brought wisdom, but they have certainly brought clarity – even if nearly always too late.

However, and this is where we get to the things that gave me mixed feelings, while the epic battle and everything that led up to it was awesome and fascinating and grabbed me completely, the SFnal elements that underpin the way this world works felt more like a tease than anything that gelled into coherence.

I realize that is also how it is for the people of Asiana, that their scientific past has moved into myth and legend, but the way that Mahimata comes to its epic conclusion relies on those SFnal elements – and it didn’t stick the dismount. The story is great, the war has consequences, evil is vanquished – in a way that was very cool – and good, or at least not-evil triumphs.

But the extremely understated romance between Kyra and Rustan came to a kind of forced happy ending, using those SFnal elements as a kind of deus ex machina. It would have felt better, or truer, or more realistic, if one of them had paid the ultimate price for their victory. Or at least that would have made more sense.

Your mileage, as I always say, may vary.

The ending doesn’t erase just how much I loved 90% of the story. In the end, in comparison with an Olympic gymnastic routine, the routine was beautiful, but viewing this story as the gymnast in the analogy, it just didn’t stick that dismount.