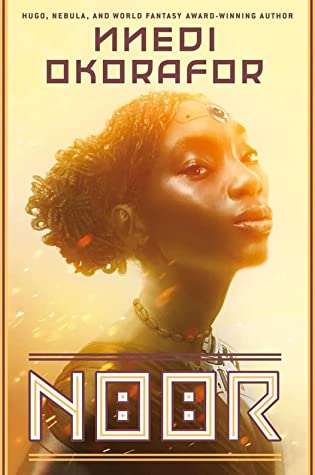 From Africanfuturist luminary Okorafor comes a new science fiction novel of intense action and thoughtful rumination on biotechnology, destiny, and humanity in a near-future Nigeria.
Anwuli Okwudili prefers to be called AO. To her, these initials have always stood for Artificial Organism. AO has never really felt...natural, and that's putting it lightly. Her parents spent most of the days before she was born praying for her peaceful passing because even in-utero she was wrong. But she lived. Then came the car accident years later that disabled her even further. Yet instead of viewing her strange body the way the world views it, as freakish, unnatural, even the work of the devil, AO embraces all that she is: A woman with a ton of major and necessary body augmentations. And then one day she goes to her local market and everything goes wrong.
Once on the run, she meets a Fulani herdsman named DNA and the race against time across the deserts of Northern Nigeria begins. In a world where all things are streamed, everyone is watching the reckoning of the murderess and the terrorist and the saga of the wicked woman and mad man unfold. This fast-paced, relentless journey of tribe, destiny, body, and the wonderland of technology revels in the fact that the future sometimes isn't so predictable. Expect the unaccepted.

Two lost people find themselves, each other and a secret that the biggest corporation in the world hoped would never be found. A secret that the powers-that-be will do anything to protect. As the saying goes, once a can of worms is opened they never go back into the can. Especially when the secret that’s been hidden is as earth-shattering and sand-spewing as this one.

And no, we’re not talking about Arrakis. We’re talking about Earth. A future Earth after an ecological/climatological disaster has created the equivalent of Jupiter’s Great Red Spot in northern Nigeria. A sandstorm of such speed and force that the windpower it generates is powering great cities all over the world.

Even as it eats up and eats away the land that gave it birth.

The Red Eye is the place where people who don’t fit, where those who have nothing left to lose, and those who refuse to be monitored by giant corporations 24/7 take themselves when they have nowhere else to go. Or when they can no longer make themselves pretend that they belong in the world that has left them behind, in one way or another.

This big story, like that big ecological disaster, starts small. With AO and DNA, those two lost people who have each survived a trauma on the very same day. AO, born with multiple birth defects both internal and external, is now part cybernetic. In fact, AO is a lot cybernetic, with two cybernetic legs and one cybernetic arm to replace the nonfunctional limbs she was born with. And with cybernetics in her brain, not because there was anything wrong, but because she wanted the enhanced memory and permanent internet connectivity.

But the more AO looks like the “Autobionic Organism” she had named herself for, the less she is accepted by the people around her. Many object on religious grounds. Some do so out of fear – not that that’s much of a difference. Some find her rejection of traditional appearances and roles for women to be anathema. Many call her an “abomination”.

When the safe space she believes she has carved out for herself suddenly becomes anything but, AO refuses to submit. Instead, she uses her greater strength to not merely subdue her tormentors but to kill the men who expected her to submit to her own execution at their hands.

In the aftermath, AO runs. Away from the towns and towards the desert. Heading away. North. Towards the Red Eye. Driving as far and as fast as she can in an unthinking fugue state. At least until her car runs out of power and she continues on foot towards an unknown but probably brief future.

Where she runs into a herdsman named DNA, who is just as lost and traumatized as she is. Who has also just defended himself with deadly force against a mob that killed his friends and most of his herd of cattle in an act of misplaced revenge against terrorists posing as herdsmen.

But the context of both of their stories is missing. When they find that context, when they are able to dig down through the layers of propaganda and misinformation that surrounds the most traumatic events in both their lives, they find a deep, dark, deadly secret.

A secret that many people will kill to protect. A secret that brought them together – and is tearing their continent apart while entirely too many people, including both of their families, go complacently about their business.

Just the way the biggest corporation in the world had planned it.

Escape Rating A: One way of looking at Noor is that it is two stories with an interlude in the middle. Another way, and a better metaphor, is that it is a story that winds up like a hurricane or a tornado, pauses in a calm storm’s eye in the middle, and then unwinds quickly in an explosive ending as the storm dissipates.

I listened to Noor through the eye of that storm, and then read the rest because it and I were both so wound up that I couldn’t wait to see which direction all those winds ended up blowing. And the narrator, particularly for that first part, had a wonderful voice that was just perfect for storytelling. She helped me to not just hear, but see and feel that oncoming storm.

At first, in the story’s tight focus on AO, it all seems small and personal. AO is different, and she is all too aware of those differences. She, and the reader, are equally aware that one of the ways in which human beings suck is that anyone who is deemed by society to be different gets punished by that society in ways both large and small. AO’s constant awareness of her surroundings and her ongoing attempts to be less threatening and less “herself” in order to carve out a safe space in which to live will sound familiar to anyone who has bucked the way it’s supposed to be in order to be who they really are.

The violence against her is sadly expected and both she and the reader sadly expect it – until it becomes life-threatening and she strikes back.

When she meets DNA and his two steers, GPS and Carpe Diem, he is in the same emotional trauma coming from an entirely different direction. Where AO has embraced the future – perhaps too much – DNA has clung to his people’s past as a nomadic herdsman. That they find themselves in the same situation is ironic and tragic, but not in any way a coincidence.

And the less the story is about those two lost people and the more it is about the forces that put them in that situation in the first place. The story expands its tent to encompass colonialism, complacency and exploitation in ways that make the most singular acts have the most global of consequences – and the other way around – in an infinity loop at the heart of the storm.