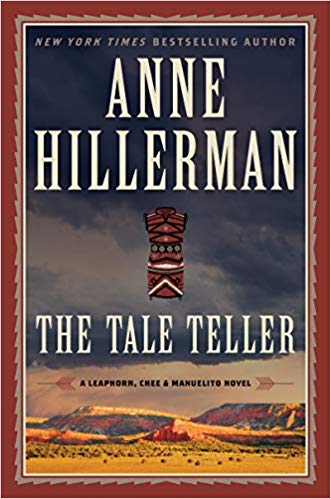 Joe Leaphorn may have retired from the Tribal Police, but he finds himself knee-deep in a perplexing case involving a priceless artifact—a reminder of a dark time in Navajo history. Joe’s been hired to find a missing biil, a traditional dress that had been donated to the Navajo Nation. His investigation takes a sinister turn when the leading suspect dies under mysterious circumstances and Leaphorn himself receives anonymous warnings to beware—witchcraft is afoot.

While the veteran detective is busy working to untangle his strange case, his former colleague Jim Chee and Officer Bernie Manuelito are collecting evidence they hope will lead to a cunning criminal behind a rash of burglaries. Their case takes a complicated turn when Bernie finds a body near a popular running trail. The situation grows more complicated when the death is ruled a homicide, and the Tribal cops are thrust into a turf battle because the murder involves the FBI.

As Leaphorn, Chee, and Bernie draw closer to solving these crimes, their parallel investigations begin to merge . . . and offer an unexpected opportunity that opens a new chapter in Bernie’s life.

I found the original Leaphorn and Chee series sometime in the 1990s, when I had a horrifically long commute in the Chicago suburbs and audiobooks saved my sanity if not my life. Audiobook publishing was nowhere near as robust as it is today, and there weren’t a lot of options for someone who spent 3 hours in their car, 5 days a week, for most of 9 years. 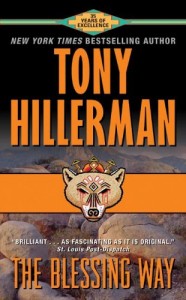 I listened to a lot of books, and The Blessing Way (the first book in the series) and all of the following books that were available, during those long drives. The stories, told in the inimitable voice of George Guidall, swept me away, kept me awake, and left me enthralled every time.

When the original author, Tony Hillerman, died in 2008, the series seemingly ended. At least until his daughter Anne picked it back up again in 2013 with the marvelous Spider Woman’s Daughter, adding Navajo Tribal Police Officer Bernie Manuelito’s name to the series as well as her perspective to the continuing series.

The Tale Teller is the fifth book in that continuation, and it swept me away from the very first page – as all of the books in this series have done.

One of the things that has made the return of the series so marvelous has been its addition of Bernie to the mix. Bernie is a Navajo Tribal Police Officer, as is her husband Jim Chee, and their mentor, the legendary Lieutenant Joe Leaphorn.

They each bring a different perspective to their work, to their culture, and to life in the Four Corners. Leaphorn is older, semi-retired, and does not believe in many of the traditions while still revering the history. Chee, although younger, has much more belief in the traditions of their people, and once studied to be a healer. Bernie Manuelito is a woman caught between the demands of her career and the need to still fulfill as many of the traditional roles of oldest daughter to her aging mother as she can manage – including the role of attempting to keep her wayward younger sister on the straight and narrow.

While the “torch” directly passed from Leaphorn to Chee and Manuelito at the beginning of Spider Woman’s Daughter, Leaphorn has remained a presence in the series as he recovered from a near fatal gunshot wound but continued to provide information and support in whatever capacity he happened to be capable of at the time.

In The Tale Teller, while Leaphorn is not quite back to fighting form, he has healed to the point where he can manage to pick up his work as a private investigator, part-time consultant to the Tribal Police and frequent mentor and sounding board for Chee and Manuelito.

This is the first story in the continuing series where Leaphorn has been fully capable of performing his own investigations and providing a full third point of view on events.

And what fascinating events they are!

At first there seem to be three separate cases here, but as so often happens in mysteries, in the end that are only two. This is one of the rare mysteries where everything does not tie up neatly in a single bow. Instead, we have two bows, one reasonably neat and one a bloody mess.

Bernie finds a dead body on a hiking trail, guarded by the victim’s faithful dog. An old friend of her mother’s finds a valuable piece of jewelry that he previously reported stolen being sold at a flea market – leading into Chee’s investigation of a sudden string of home robberies. And Leaphorn takes on a case from the Tribal Museum. An important donation may have been stolen, either before it arrived, or after. Or it may not have been in the box at all. That the donor wishes to remain anonymous adds to the mystery. That one of the important pieces of the puzzle dies almost the instant that Leaphorn gets involved shifts the problem from seemingly minor to possibly deadly.

While not all of the cases end happily, following the trail of clues and bodies is a page-turner from beginning to end – and a delight.

Escape Rating A+: I read this in a single day. This was one I picked up pretty much everywhere, like at meals, in the bathroom, in the car (as long as someone else was driving), and pretty much every time I had a couple of spare minutes.

I sunk right back into this place with these people on the very first page, and didn’t come out until the end.

What I love about this series is the way that it combines its police procedural mystery with a perspective into a part of the U.S. that outsiders don’t often get to experience with an, if not insider’s perspective, at least a well-informed and reverential outsider’s point of view.

This would be a very different series if the investigator were one of the FBI agents who often intrude – as they do in this case. Instead, it is the point of view of people who are insiders in a world that most of us are not, while they still are outsiders within their own culture so that they can both see the “why” of things while not being emotionally involved with all of the “who”.

The cases in this particular story are complex, especially Leaphorn’s investigation into the possibly missing artifact. As readers, we learn a lot about both the history of the Navajo people and the treatment of precious artifacts. At the same time, the case has echoes in the past while it is motivated by events in the present. The resolution is heartbreaking but fits.

Chee and Manuelito’s cases turn out to have more tentacles than an octopus, ranging from burglaries to internet scams to witness protection to murder – but at least that case, which gets a bit too close to Bernie’s family, ends with a mostly happy resolution.

That the perpetrators were hiding in plain sight but not obvious until very near the end made both cases fascinating to read.

I’m grateful to those long ago long commutes, now that they are in the past, for the terrific series such as this one that they introduced me to. And I’m looking forward to returning to the Four Corners with Leaphorn, Chee and Manuelito at the next opportunity!

For the final day of my Blogo-Birthday Celebration Week I’m giving away a copy of any book in the combined Leaphorn, Chee & Manuelito series, from it’s very beginning in The Blessing Way to the latest book, The Tale Teller. If you are new to the series, I would recommend starting with Spider Woman’s Daughter, as it brings the reader into the action at the present while providing enough background to immerse you in the story and familiarize you with the characters. But it is up to the winner to decide. Enter the rafflecopter, and it might be YOU!

6 thoughts on “Review: The Tale Teller by Anne Hillerman + Giveaway”