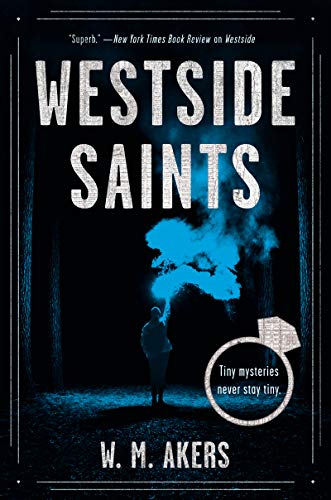 Return to a twisted version of Jazz Age New York in this follow up to the critically acclaimed fantasy Westside, as relentless sleuth Gilda Carr’s pursuit of tiny mysteries drags her into a case that will rewrite everything she knows about her past.
Six months ago, the ruined Westside of Manhattan erupted into civil war, and private detective Gilda Carr nearly died to save her city. In 1922, winter has hit hard, and the desolate Lower West is frozen solid. Like the other lost souls who wander these overgrown streets, Gilda is weary, cold, and desperate for hope. She finds a mystery instead.
Hired by a family of eccentric street preachers to recover a lost saint’s finger, Gilda is tempted by their promise of “electric resurrection,” when the Westside’s countless dead will return to life. To a detective this cynical, faith is a weakness, and she is fighting the urge to believe in miracles when her long dead mother, Mary Fall, walks through the parlor door.
Stricken with amnesia, Mary remembers nothing of her daughter or her death, but that doesn’t stop her from being as infuriatingly pushy as Gilda herself. As her mother threatens to drive her insane, Gilda keeps their relationship a secret so that they can work together to investigate what brought Mary back to life. The search will force Gilda to reckon with the nature of death, family, and the uncomfortable fact that her mother was not just a saint, but a human being.

Westside is a liminal place, walled away somewhere between “could be”, “might have been” – and Back to the Future. Literally. No DeLorean this time though, just a family of scam artists posing as revival preachers, a desperate con artist and the magic and mystery that make Westside what it is.

Westside Saints is the surprising followup to last year’s marvelous Westside. I say surprising mostly because I’m surprised that there was a followup! At the time, it seemed like everything that needed to be said got said, there was a huge climax to the story and it all wrapped it – not with a neat and tidy bow but with a dirty and bedraggled one made into a garrote, because that’s Westside.

But at the end of that story Gilda Carr walked, not away but into the ever-deepening darkness that settles over Westside, to nurse her wounds, both physical and emotional, and continue her investigations into tiny little mysteries.

Looking into a big one nearly killed her, and left a lot of bodies all over Westside. Bodies that still haunt her and her community when Westside Saints begins.

And it begins with a bang, quite literally, as the revival preaching family of the late Bully Byrd pulls off the miracle to end all miracles, and their dead and departed founder rises from the dead out of a cauldron filled with smoke and fire.

Gilda has been looking into a couple of tiny mysteries for the Byrd family, and believes that while they are on the side of the angels, they are not nearly as “saintly” as they make themselves out to be. Like so many of Gilda’s beliefs and illusions, only the worst parts of this one turn out to be true.

Because no one is in Westside. Not even the deeply religious Byrds who picked her dead, drunk father out of many a gutter back in the day.

So Gilda is certain that the supposed “resurrection” of the Reverend Bully Byrd is just another confidence trick. Or she is until her late and very much lamented mother, Mary Fall, walks into the house Gilda inherited from her parents and claims that she has amnesia. That she wants Gilda to investigate the tiny mystery of her missing ring, and hopefully solve the bigger mystery of where her memory went.

Bully Byrd’s return to Westside may have been a hoax, but Mary Fall’s resurrection, even a Mary Fall who seems to be in her early 20s and not the woman who died in her mid 30s. Not the woman who was Gilda’s mother but could be the woman who became her.

She’s certainly more than enough like Gilda to make that seem possible – even if she’s nothing like the saintly woman that Gilda remembers. The more time Gilda spends with lying, exasperating, infuriating Mary Fall, the less she wants to condemn this bright, shiny troublemaker to the life that Gilda wouldn’t wish on her worst enemy.

Not even if she has to. 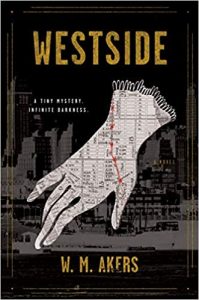 Escape Rating A: I loved the first book, Westside, and loved this one every bit as much. After yesterday’s disappointment, I’m really glad I chose Westside Saints to close out the week.

At the top, I said that Westside was a liminal place, a place that exists on the borders, and so does the series that is wrapped around it. The first book straddled an invisible line between urban fantasy, historical fiction and horror, existing in all three but fully inhabiting none.

Westside Saints is a bit of a different mix, as if it moved just a step to the left to sit on the intersection between urban fantasy, historical fiction and science fiction.

In any case, the series is a genre-bender and genre-blender of epic proportions.

The entree into this story is Bully Byrd’s supposed resurrection. Gilda’s investigation dives deeply into the supposedly saintly Byrd family and finds, basically, a cesspit. Which is what she has come to expect of everyone and everything in Westside. But that discovery exposes not just one family, but a layer of rot that she thought had been eradicated at the end of that first book. It’s an investigation that strips away even more of the few illusions Gilda thought she had left. We’re with her as she keeps turning over rocks, only to find that yet more disgusting things keep crawling out.

But she’s a fighter and a survivor and watching her work is compelling in the extreme. It feels like the tinier the mystery she starts with, the bigger – and nastier – the reveal is at the end.

One of the themes that felt so prominent in Westside stands out even more in the sequel. In that first book, Gilda is forced to reckon with the people who were parents really were, and not the plaster saints her child-self made them out to be. That is even more true in Westside Saints, as she discovers the real reason why neither of her parents ever told her how they met or why they married. Because from certain perspectives, they really, really shouldn’t have.

In the end, Gilda faces pretty much the same paradox that Marty McFly does in Back to the Future. She has to somehow get her parents together, no matter how little her mother deserves to be condemned to the life and death they both know she’ll lead, in order to history’s paradoxes to be resolved. Otherwise the events of Westside never come to pass – and history will be the worse for them.

Even if Mary Fall’s life would be for the better.

In the first book, part of the story was about Gilda fighting for the soul of Westside. At the end, after the high butcher’s bill has been toted up, it feels like she and her friends have won. But, as Westside Saints gets deep into the aftermath of those events, it turns out that what Gilda achieved was either a Pyrrhic victory or the first battle in what will be a long drawn out series of skirmishes. Hopefully we’ll find out in later books in the series. Which I hope there will be several of, even if it turns out that Gilda is just fighting the long defeat. Or perhaps especially – if that’s the way it turns out.

One thought on “Review: Westside Saints by W.M. Akers”