Today’s cat picture is Freddie instead of George. Freddie does not like to have his picture taken, and will run if he sees someone approaching him in “camera position”. But this time he was sleeping on my lap and looked up at me sleepily, too sleepily to get out of the way of my trusty iPad. This closeup shows just how much he resembles the Currier print of “The Favorite Cat” that the Metropolitan Museum of Art uses whenever they need a cat picture. 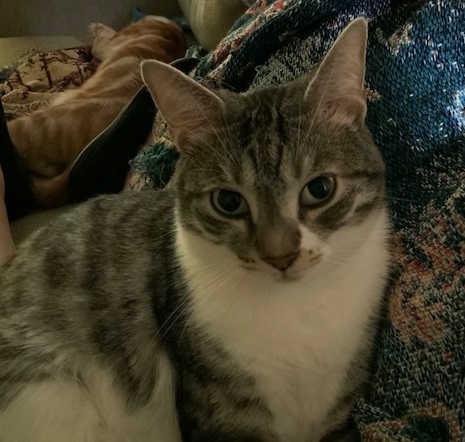 And, I have books. I always have books. Some of which I’ve been waiting for for a while. As well as A Desolation Called Peace, which I’ve been looking for ever since I finished A Memory Called Empire, which was utterly, completely, totally awesome and deserved ALL THE AWARDS! I loved it so much that I got the new one in both eARC and audio. We’ll see which one I actually end up “reading”.

For Review:
20/20 by B. Shawn Clark
A Desolation Called Peace (Teixcalaan #2) by Arkady Martine
Fearless by Allen Stroud
Good & Evil (Black Sun #2) by Eric Giacometti and Jacques Ravenne
The Last Watch (Divide #1) by J.S. Dewes
Monogamy by Sue Miller
Out Past the Stars (Farian War #3) by K.B. Wagers
Simmer Down by Sarah Smith
Sleep Well, My Lady by Kwei Quartey
Snapped (Playbook #4) by Alexa Martin
The Unbroken (Magic of the Lost #1) by C.L. Clark