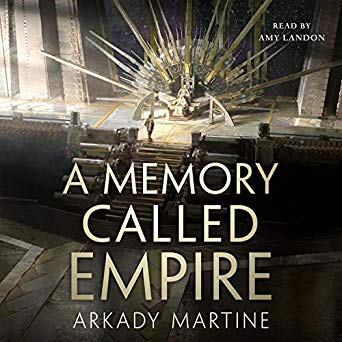 In a war of lies she seeks the truth...

Ambassador Mahit Dzmare travels to the Teixcalaanli Empire’s interstellar capital, eager to take up her new post. Yet when she arrives, she discovers her predecessor was murdered. But no one will admit his death wasn’t accidental – and she might be next. Now Mahit must navigate the capital’s enticing yet deadly halls of power, to discover dangerous truths. And while she hunts for the killer, Mahit must somehow prevent the rapacious Empire from annexing her home: a small, fiercely independent mining station.

As she sinks deeper into an alien culture that is all too seductive, Mahit engages in intrigues of her own. For she’s hiding an extraordinary technological secret, one which might destroy her station and its way of life. Or it might save them from annihilation.

A Memory Called Empire is book one in the Teixcalaan trilogy.

There’s a great quote from Lois McMaster Bujold describing fictional genres as romances. Not in the HEA sense, but in a much broader sense. In her scenario, mysteries are romances of justice. And science fiction is the romance of political agency.

That’s certainly true in the case of A Memory Called Empire. Because this is a political story, first and foremost. But it also has elements of mystery – or at least a search for justice.

That made no sense, did it? But it does in the context of this story. Mahit Dzmare is the new Ambassador from the tiny independent mining station of Lsel to the great, magnificent and ever hungry empire of Teixcalaan. Within her brain she carries an imago, a complete memory copy, of her predecessor Yskandr Aghavn, who she has come to Teixcalaan to replace – and to get to the bottom of why Yskandr needs replacing.

His body lies dead on a mortuary slab in Teixcalaan, but his memory, all his experiences and his encapsulated self, rest inside Mahit’s brain, supposedly available for her consultation, to aid her in her job. Except that seeing his own corpse shorts out the Yskandr in her head, leaving Mahit lost and very much alone to unravel the mess that Yskandr left her – if she can.

Before she joins him on another slab.

But in attempting to retrace Yskandr’s doomed steps, she discovers that all is not well at the heart of the Empire, and that Yskandr was in the middle of nearly, but not quite, everything that has gone wrong. And not just in Teixcalaan.

And that for Mahit to have even the ghost of a chance to fix the situation, her fractured self, her Station, and even the Empire, she’ll first have to make that mess bigger and deeper, hoping to live long enough to make it all turn it more-or-less right.

By making it a whole lot wronger first.

Escape Rating A+: This was an absolute wow from beginning to end, with an absolute gut punch at that end. I listened to this one, and got so involved in the listening that I played endless games of solitaire just to have something to occupy my hands while this marvelous story spun into my ears.

There’s so much wrapped up in here, and it keeps spinning and spinning long after the final page.

Teixcalaan is a fascinating place, and Mahit Dzmare has been fascinated by it for most of her life. Teixcalaan is the name of the city, and the world, and the empire they spawned. To be a citizen of Teixcalaan is to be civilized. Everyone else, including the residents of Lsel Station like Mahit, are considered barbarians.

It’s self-centered and self-absorbed and blinkered and othering – but Teixcalaan is the jewel at the heart of the world, and Mahit longs to be a part of it.

But Mahit, an outsider, is able to be enthralled by its art, its literature and its beauty while still being aware of the sickness that lies at its center. A sickness that is embodied by but not confined to its dying Emperor.

An Emperor without a named successor, who believes that he has found a way to live forever. Yskandr promised him an imago. And died for it.

In the bare week that Mahit is on Teixcalaan, she finds herself unwillingly at the heart of the conflict, seduced by this place that she has always yearned to be, and desperate to find a way to preserve her homeworld – whether she ever returns there or not.

Because as much as Teixcalaan reaches out to simultaneously embrace her and imprison both her and her Station, forces back home are equally determined to wipe out both Mahit and anything of Yskandr’s plots and plans that remain.

As an enemy bears down on them all.

Part of what makes this story trip along so marvelously is the way that it conveys just how little time Mahit has, and just how desperate her circumstances are. In barely a week she has to figure out what killed Yskandr, why her imago has malfunctioned, what was promised to the Emperor, who is angling for the throne, who is out to get her at home, who she can rely on in Teixcalaan, who she can trust on Lsel, and keep one step ahead of anyone who is out to get her. Which is nearly everyone.

Meanwhile, in very brief moments, she gets to explore the place that she has yearned for all her life – as it falls apart. She finds love and hope and fear and a friend who will be hers for life – if she survives.

And we feel for her and with her as she runs as fast as she can to save what she can – and we wish we could be half as brave and half as daring.

At the start I said this was a story about sacrifice. There are two sacrifices in this story playing against one another – one willing and one very much not. It made me think about what made the one so uplifting, and the other so mean and base.

“The needs of the many outweigh the needs of the few, or of the one.” So said Spock with his dying breath in The Wrath of Khan. His sacrifice was moving and noble and heartbreaking because he willingly gave his life to save his shipmates. He walked into that chamber with eyes wide open and heart full, and it moved his shipmates, as well as many, many viewers, to tears.

So it is with the sacrifice that ends A Memory Called Empire. A man willingly walks into the fire to serve a higher purpose. And it inspires a people.

But Yskandr’s and Mahit’s sacrifice is a cheat. It is not noble, or inspiring. Because someone else decided, alone in the dark, to sacrifice them both for what that person perceived as “the Greater Good”, which turned out, of course, to be anything but.

At the last, Mahit willingly makes another sacrifice. She gives up a dream so that she can remain herself. And it hurts and we feel it, just as we have felt every break of her heart along the way.

At the end, Mahit goes home to Lsel. To uncover who and what was behind those dirty deeds in the dark that set much of this story in motion. I suspect that for Mahit the events of the second book in the series, A Desolation Called Peace will be very desolate indeed.