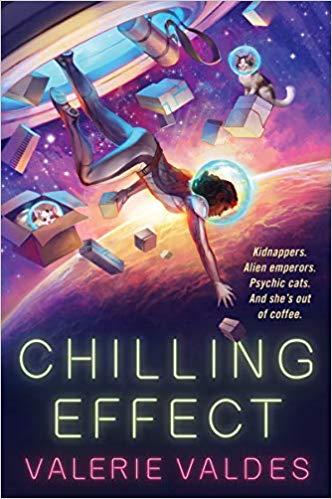 A hilarious, offbeat debut space opera that skewers everything from pop culture to video games and features an irresistible foul-mouthed captain and her motley crew, strange life forms, exciting twists, and a galaxy full of fun and adventure.

Captain Eva Innocente and the crew of La Sirena Negra cruise the galaxy delivering small cargo for even smaller profits. When her sister Mari is kidnapped by The Fridge, a shadowy syndicate that holds people hostage in cryostasis, Eva must undergo a series of unpleasant, dangerous missions to pay the ransom.

But Eva may lose her mind before she can raise the money. The ship’s hold is full of psychic cats, an amorous fish-faced emperor wants her dead after she rejects his advances, and her sweet engineer is giving her a pesky case of feelings. The worse things get, the more she lies, raising suspicions and testing her loyalty to her found family.

To free her sister, Eva will risk everything: her crew, her ship, and the life she’s built on the ashes of her past misdeeds. But when the dominoes start to fall and she finds the real threat is greater than she imagined, she must decide whether to play it cool or burn it all down.

First of all, any story that begins with genius, psychic cats on a spaceship has me from jump. And that’s exactly the way that Chilling Effect starts, with Captain Eva Innocente running around La Sirena Negra trying to chase down her cargo; 20 genetically engineered, hyper-intelligent and hypnotic felines.

And just when she thinks she’s finally corralled the last one – everything goes pear-shaped. Which turns out to be a metaphor for this entire space-romp of a story, as Eva and her crew find themselves running a game both with and against the biggest criminal organization in the galaxy, trying to save Eva’s sister, their own hides, and one of the big secrets of their universe.

It’s an edge of your seat ride through every jumpgate in the known universe to see if Eva can get her ship, her crew, her family and her soul through this adventure relatively unscathed.

But it’s happening to her, whether she wants it or not. And while she certainly doesn’t want that adventure, she does want to save her sister and the rest of her family. No matter who, or what, gets in her way.

Escape Rating A+: There have been plenty of comparisons already between Firefly and Chilling Effect. I think the best one that I read said something about if Firefly and Mass Effect had a baby midwifed by Guillermo del Toro, that Chilling Effect would be the resulting book baby.

I think there were more parents and grandparents involved, but I’ll still grant the idea of del Toro as the midwife because it’s just plain cool.

The resemblance between La Sirena Negra and Serenity, the Firefly-class ship in the series, along with its motley, barely-on-the-edge-of-legality crew, is out and proud and adds to the long list of stories inspired by that series. Firefly casts a long shadow for such a short-lived show.

There are also plenty of points where Eva reads a lot like the female Commander Shepherd in Mass Effect – just with an even looser relationship with the law and the truth.

But it feels to me as if Chilling Effect also has at least two SFnal “fairy godmothers”, Kylara Vatta from the Vatta’s War series and Tess Bailey from Nightchaser. In both of those female-centric space operas, you get the same kind of leader who is on the run from deep, dark secrets that are buried, not at all deeply in the family tree, that the heroine must confront in order to be free.

In addition to the terrific characterizations of Eva and her crew, part of what makes this story so good are its exploration – and eventual complete skewering, of a trope that normally makes readers cringe.

I’m talking about the overused and now hated convention of putting female characters in literal or figurative refrigerators, in other words, freezing them out of the narrative, so that they become an object to motivate a hero into action to either rescue or avenge them.

In Chilling Effect, Eva’s sister is put into cryo-sleep by a criminal organization known as “The Fridge”, moving Eva and her crew to great lengths in order to free her and ultimately discovering the secrets behind The Fridge and the ancient race who seeded the galaxy with jumpgates (and linking back to Mass Effect yet again.)

But instead of motivating a man and leaving the female character offstage for the rest of the story, we have a woman moving the galaxy to rescue another woman, with a mixed-species and gender crew. The whole thing works as both impetus and send-up in one glorious smash!

It’s pretty clear that I loved Chilling Effect from that opening scene, and that I can’t wait for the next book in the author’s Untitled Space Opera series. (That’s literally what the series is called, but the next book does have a title, and that’s Prime Deception.)

But there’s one more thing I want to get into before I let you go off to read Chilling Effect.

It’s an important part of Eva Innocente’s story that she and her family, and even the colony they came from, are, like the author, of Cuban descent. This isn’t just window-dressing, that origin story both underpins Eva’s actions and peppers her language with phrases from that heritage.

I had to look up a lot of the idioms, and I highly recommend that you do. They are often hilarious, always informative, and add to the flavor and texture of the book and the characters in ways that just feel right.

As someone who grew up in a household where another language was frequently sprinkled into the conversation, there are concepts that just don’t translate from one language to the next, in spite of the English language’s often-quoted propensity to not merely “borrow words; on occasion, English has pursued other languages down alleyways to beat them unconscious and rifle their pockets for new vocabulary.”

The way that Eva mixes the Cuban phrases that she learned as a child add to the depth and verisimilitude of her character – and I feel that adds to the story whether I initially understand what she’s saying or not. (After all, that’s what Google Translate is for.) And I want that representation for her because I also want to see it in other stories – and am – for myself.

So I may have gotten into this story for those psychic cats, but I stayed for Captain Eva.