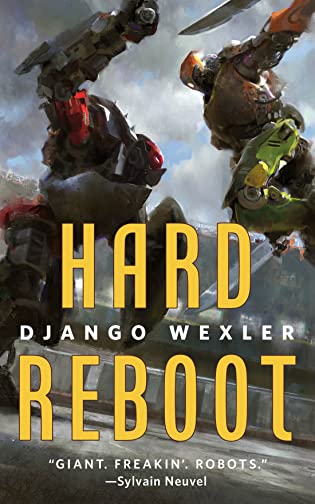 Django Wexler's Hard Reboot features giant mech arena battles and intergalactic diplomacy. When did academia get to be so complicated?
Kas is a junior researcher on a fact-finding mission to old Earth. But when a con-artist tricks her into wagering a large sum of money belonging to her university on the outcome of a manned robot arena battle she becomes drawn into the seedy underworld of old Earth politics and state-sponsored battle-droid prizefights.
Is it time to get back to the books, yet?

I came into this one expecting “Rock ‘em, Sock ‘em” mech battles combined with a bit of “academic politics are so vicious because the stakes are so small”. The snark voice in my head was imagining the academics themselves fighting it out inside the mechs, because that would have been hilarious.

Also true in a very perverse sort of way. And possibly a whole lot of vicarious fun. It would certainly help some of my friends in academia vent some well-earned spleen on the whole subject.

But that’s not exactly what I got. Although it also kind of is – just not as directly as I was first thought. In a metaphorical sense, however, yes, very much that. And isn’t that just the way we think of academic politics?

What underpins this story about a hard-luck mech fighter and a young academic clawing up way up the ranks from the very bottom is a story about class and privilege, fought by two stubborn, scrappy underdogs against systems that are designed to keep both of them in their “place”.

Along with a thrilling high stakes mech battle. And love conquering all – even the dragons of academia.

Escape Rating A-: I was expecting the mech battle. I was also expecting the scrappy underdogs. I wasn’t exactly expecting the romance but wasn’t surprised by it either. What I was surprised about was just how often and how well the story manages to sneak in a whole lot about power and privilege and the way that the amount of both you think you have has a whole lot to do with your environment.

What makes this story work is the snarky, sarcastic, scared and ultimately defiant voice of Kas, a young scholar who doesn’t see herself as privileged at all. Because in the environment she comes from, she very much isn’t.

But compared to Zhi, that underdog, under water in debt, underground and under the radar mech fighter, Kas is both privileged and rich and initially seems like a mark that Zhi can exploit without troubling her conscience one little bit.

And they’re both right and they are both wrong – although admittedly Kas is quite a bit wrong-er than Zhi.

Because if this scheme goes pear-shaped, Kas will be sent home in disgrace, will lose her academic place, will probably be re-educated and will never get even a glimmer of a chance to be who and what she’s always wanted to be. But she’ll still have a roof over her head, she’ll still have plenty to eat, she’ll still have parents and a family that love her and will support her even if they are disappointed in her. And she’ll live to see more than one century in good health – and possibly even two – thanks to the excellent medical care that is her right.

Which doesn’t mean that she isn’t currently a third-class citizen – quite literally – in academic circles. And that the system she lives under isn’t set up to guarantee that she remains so.

But if Zhi loses the mech battle she will become an actual slave to the criminal “Houses” that run everything on old Earth. Or she’ll be killed as an example to anyone else who sets themselves up in opposition to the Houses – just like the friend who was helping her was killed as a warning for her.

And if she just barely ekes out a win, she’ll still be stuck on old Earth, still under the thumb of the Houses, still threatened with slavery or murder at every turn. While worrying every day about whether she’ll have enough to eat and be able to scrape together and defend some minimal shelter. If she isn’t murdered outright, she’ll die long before she reaches her first century, aged before her time, because there is no medical care for the scavs like Zhi on old Earth.

They have to not just win, but win really, really, really big, in order to make their dreams come true – but also to keep their nightmares at bay. And have a chance at keeping each other.

So I came for the mech battles. But I stayed for Kas’ voice and the relationship she develops with Zhi. That they managed to finally put one over on ALL of the people trying to keep them down and out was icing on a very tasty, if slightly metallic, cake.