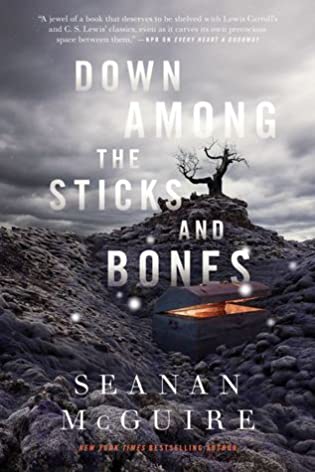 Twin sisters Jack and Jill were seventeen when they found their way home and were packed off to Eleanor West’s Home for Wayward Children.
This is the story of what happened first…
Jacqueline was her mother’s perfect daughter—polite and quiet, always dressed as a princess. If her mother was sometimes a little strict, it’s because crafting the perfect daughter takes discipline.
Jillian was her father’s perfect daughter—adventurous, thrill-seeking, and a bit of a tom-boy. He really would have preferred a son, but you work with what you've got.
They were five when they learned that grown-ups can’t be trusted.
They were twelve when they walked down the impossible staircase and discovered that the pretense of love can never be enough to prepare you a life filled with magic in a land filled with mad scientists and death and choices. 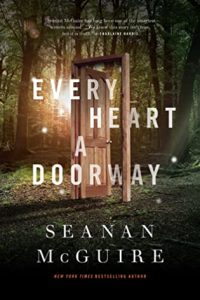 I’ve read this series completely out of order, at least once I read the first book, Every Heart a Doorway, first. I’m coming into this book, the second book in the series, after having read the sixth, Across the Green Grass Fields, and the seventh, Where the Drowned Girls Go.

There are a few messages that permeate the series, lessons about learning to march to the beat of your own drummer, recognizing that conformity is a trap, that magic is real and that there is no one right way to be a girl, or a boy, or a human, or a monster, or all of the above at the same time.

But the number one lesson is that adults can’t be trusted. It’s a lesson that Jacqueline and Jillian Wolcott seem to have absorbed along with their parents’ continuously reinforced messages about being who their parents want them each to be and not anything about who they really are. Except twins, and sisters, and forced into opposing straitjackets.

Unfortunately, they don’t seem to have applied that number one lesson nearly broadly enough. 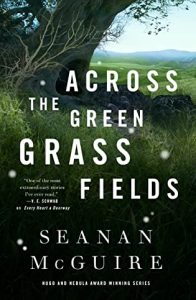 Escape Rating A-: Jack and Jill Wolcott are just two of the Wayward Children that we met in Every Heart a Doorway. This is the story of how they got to be the people we met in that first book, and it’s a doozy.

This is a story about the power of choice and also about the force of choice denied. Jacqueline was expected to be the girliest of girls, a perfect fairy tale princess, because that’s what her mother planned for her daughter to be. Jillian was the scruffiest and most adventurous of tomboys, because that’s what her father decided to settle on when he got a second daughter instead of the son he expected.

The problem with their childhood wasn’t that either of those roles are either right or wrong, just that neither of them got to try out anything except their parent’s expectations, and neither of them ever got to experiment or deviate from the role they had been assigned just about at birth.

When they stepped through their door into the dangerous world of the Moors, they were each faced with a choice. And they each chose to have the experience they’d been denied. Jill became a pampered princess, and Jack became a hard-working apprentice.

But this is the Moors, where everything follows the pattern of stories about monsters. The pampered princess was enthralled by her vampire master, and the apprentice was learning her trade from a mad scientist.

So each got to explore the parts of their nature that their parents refused to even acknowledge, letting Jill finally be pretty, pampered and cruel, while Jack was scrupulous, intelligent and practical. Until Jill’s ruthless cruelty destroyed Jack’s hard-won life and they both had to return to the world of their birth.

A world that isn’t ready to take either of them back, leading them to their residence at Miss West’s Home for Wayward Children and bringing the entire story full circle. 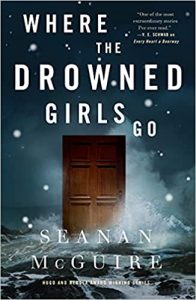 Down Among the Sticks and Bones could be read before Every Heart a Doorway, but they probably work better in the proper order. It feels deeper to learn about how Jack and Jill got to be who they are after seeing the place they end up. We’re also able to appreciate the tragedy of their story, not just because Jack loved and lost in the Moors, but because Jack really had found a home that was perfect for her, a home she was forced to give up to save her sister.

But the lessons are still there. Jack and Jill couldn’t trust their parents before they left and can’t trust them after their return either. Jill shouldn’t have trusted her Master on the Moors, where Jack’s skepticism served her very well. The choices of their own hearts served them better, for select definitions of better in Jill’s case, than did the expectation of their parents. That happiness and fulfillment can be found in the unlikeliest of places.

And that love is all there is is all we know of love. 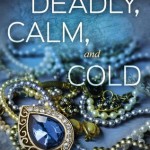 Review: Deadly Calm and Cold by Susannah Sandlin + Giveaway
Review: On the Scent by Angela Campbell 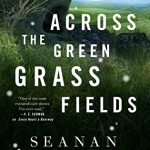