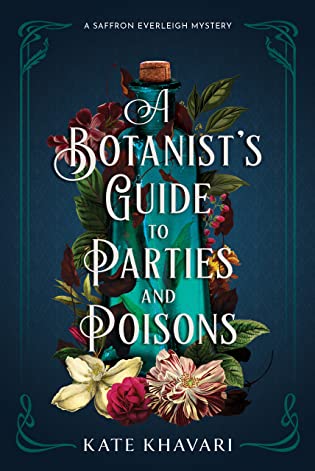 Saffron Everleigh is in a race against time to free her wrongly accused professor before he goes behind bars forever. Perfect for fans of Deanna Raybourn and Anna Lee Huber, Kate Khavari’s debut historical mystery is a fast-paced, fearless adventure.
London, 1923. Newly minted research assistant Saffron Everleigh attends a dinner party for the University College of London. While she expects to engage in conversations about the university's large expedition to the Amazon, she doesn’t expect Mrs. Henry, one of the professors’ wives to drop to the floor, poisoned by an unknown toxin.
Dr. Maxwell, Saffron’s mentor, is the main suspect, having had an explosive argument with Dr. Henry a few days prior. As evidence mounts against Dr. Maxwell and the expedition's departure draws nearer, Saffron realizes if she wants her mentor's name cleared, she’ll have to do it herself.
Joined by enigmatic Alexander Ashton, a fellow researcher, Saffron uses her knowledge of botany as she explores steamy greenhouses, dark gardens, and deadly poisons. Will she be able to uncover the truth or will her investigation land her on the murderer’s list?

There’s something rotten in the state of London’s University College botany department. The signs, at least in the very broadest strokes, are a bit difficult for researcher Saffron Everleigh to miss. After all, the wife of one of the leading lights of her department has just been struck down – right in front of her – in the middle of a faculty and staff party.

A party to celebrate the fast-approaching departure of many of the department’s most prominent – and/or most ambitious – members for a research expedition to the heart of the Amazon.

Not that Saffron ever had the remotest chance of going on that expedition. Not that she isn’t an excellent researcher with sincere hopes of entering graduate studies in her chosen field. And if she were a man, she’d be well on her way.

As it is, she’s the focus of gossip, innuendo, and even blatant sexual harassment from the head of her department. As the story opens, the only person she’s certain respects her as a scientist is her mentor, Dr. Maxwell, who treats her very much as a daughter.

Because he was a close friend of her late father, who was also a botany professor at the College. But Dr. Everleigh was killed in the Great War, as was the man Saffron intended to marry. So she is following in her father’s footsteps as a researcher instead of living the life she had planned on.

When her mentor is accused of poisoning Mrs. Henry with poisonous plants he brought back from an earlier expedition, Saffron rushes to prove the police wrong. While her amateur detecting nearly results in her own death by poison, she does manage to conclude that the police have leapt to an obvious but incorrect conclusion.

The woman was poisoned, she is in a coma, but her mentor did not commit the deed. But as she waits for the results of her ill-advised experiment to wear off, she learns she has another colleague in finding the solution to the crime.

Alexander Ashton isn’t certain which he finds more alluring – the investigation of the poisoning or the woman who is hell-bent on conducting it. But the deeper they dig into the rot, the more dangerous the situation becomes. If there’s a secret that is worth putting one woman into a coma, it’s all too possible that it’s a secret worth killing for.

But Alexander is determined to help Saffron find it, and not just for personal reasons. After all, if Dr. Maxwell is not the poisoner, someone else in the Botany Department is. And that poisoner might just be part of the Amazon expedition right along with him.

Escape Rating A-: What makes A Botanist’s Guide to Parties and Poisons so much fun – besides that wonderfully evocative title – is the way that, as the story goes on, so many of the things we – and Saffron – thought were true turn out to be not quite what we thought they were. Particularly the people. And especially Saffron herself.

At first, Saffron is investigating what she believes is a miscarriage of justice being perpetrated by police detectives who are too interested in the obvious solution and unwilling to put in either the legwork or the brain work to make sure they’ve got the right man – or even the right crime.

Her initial motive for her amateur sleuthing is to clear the name of Dr. Maxwell, who is both a mentor and a father-figure to her. She knows he can’t possibly be guilty of the poisoning, not just because she knows the man but because her logical mind has examined the scene from all sides and knows that it wasn’t physically possible for him to have either poisoned the champagne or the glass it was poured into.

As we follow along in Saffron’s wake, as she and her reluctant fellow amateur investigator Ashton go further and further out on the limb of illegal and illicit activities in her dogged pursuit of the truth and his equally dogged pursuit of her – everything changes.

Mrs. Henry WAS poisoned – but not for any of the personal or scandalous reasons that Saffron originally believed. She may have begun her quest to clear Dr. Maxwell’s name, but she continues to pursue it because she’s caught up in the hunt and can’t resist the puzzle. The more she digs, the more she uncovers, the more there is to find. And the more dangerous her situation becomes.

This is a story that starts out seeming like it’s heading down a rather salacious and scandalous path, only for it to twist itself into a much more serious investigation of discovery of both the criminal and the personal kind.

To sum things up, A Botanist’s Guide to Parties and Poisons is a fun and twisty mystery that has a lot of things to say about women in academia at a time when it was possible but not expected or respected. As the first book in a series, it gives hints that Saffron and Ashton’s relationship will continue to blossom – and probably continue to investigate crimes that the police would prefer they kept clear of.

If you like stories like Saffron’s, she reminded me of several investigating heroines who operate during the same time period, particularly Mary Russell, Maisie Dobbs and Bess Crawford. And for a similar story in a much different setting, The Mimicking of Known Successes by Malka Older covers some surprising bits of the same ground of deadly shenanigans in academia under investigation by initially reluctant academicians turned amateur detectives.

One thought on “Review: A Botanist’s Guide to Parties and Poisons by Kate Khavari”