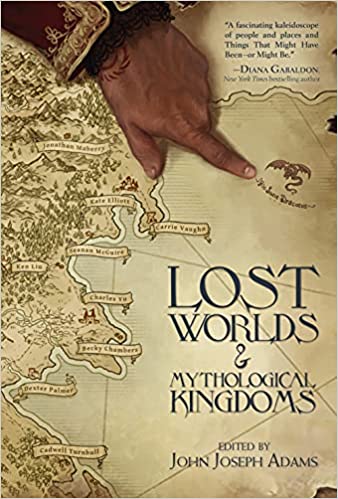 From the legends of Atlantis, El Dorado, and Shangri-La to classic novels such as King Solomon’s Mine, The Land That Time Forgot, and The Lost World, readers have long been fascinated by the idea of lost worlds and mythical kingdoms.
Read short stories featuring the discovery of such worlds or kingdoms―stories where scientists explore unknown places, stories where the discovery of such turns the world on its head, stories where we’re struck with the sense of wonder at realizing that we don’t know our world quite as well as we’d thought.
Featuring new tales by today's masters of SF&F:
Tobias S. BuckellJames L. CambiasBecky ChambersKate ElliottC.C. FinlayJeffrey FordTheodora GossDarcie Little BadgerJonathan MaberrySeanan McGuireAn OwomoyelaDexter PalmerCadwell TurnbullGenevieve ValentineCarrie VaughnCharles YuE. Lily Yu

Just the same, once upon a time the map of the ‘real’ world used to have more blank spaces in it. Long distance travel was difficult and time-consuming, long distance communication was an impossible dream, life was short and the road was too long to even be imagined. But speaking of imagining, I imagine that every place’s known and unknown stretches were different – but in the way back each city, country, people or location only had so much reach and stretch.

And then there was the era of European exploration and eventually industrialization. For good or ill, and quite frequently ill, those blank places on the map got smaller and were filled in. Which didn’t stop and probably downright inspired a whole library’s worth of stories about imaginary places that might exist whether on – or in – this planet or those nearby.

But as the terra become increasingly cognita, the well of those stories dried up. Which does not mean that the urge to explore what might be beyond the farthest horizon has in any way faded.

This is a collection intended to feed that human impulse to go where no one has gone before – and report back about it before we invade it with, well, ourselves. Some of the stories that explore that next frontier are fantasy, some are science fiction, and a few trip over that line from fantasy into horror.

And they’re all here, vividly described to make the reader want to be there. Or be extremely grateful that they are NOT.

Escape Rating B: Like nearly all such collections, Lost Worlds and Mythological Kingdoms has some hits, some misses and one or two WTF did I just read? in a convenient package for exploration.

Let’s get the WTF’ery out of the way so we can move on to the good stuff. The two stories that were set in strange hotels, Comfort Lodge, Enigma Valley and Hotel Motel Holiday Inn just did not land for me at all. The second made a bit more sense than the first but neither worked for me. Of course, YMMV on both or either of those particular trips.

Three stories were misses – at least from my perspective. They weren’t bad, they just didn’t quite live up to their premise. Or something like that. The Light Long Lost at Sea was a bit too in medias res. There’s a world there with lots of interesting backstory but what we got was more of a teaser than a story with a satisfying ending. The Expedition Stops for the Evening at the Foot of the Mountain Pass had some of that same feel, like there was huge setup for the story somewhere else and we weren’t getting it. But we needed it. The Return of Grace Malfrey is one that had a fascinating premise that kind of fizzled out.

One story in the collection hit my real-o-meter a bit too sharply. That was Those Who Have Gone. It does get itself into the “did I find a hidden civilization or was I dreaming?” thing very, very well, but the way it got there was through a young woman on a scary desert trip with her 30something boyfriend who she is rightfully extremely afraid of. That part was so real it overwhelmed the fantasy place she fell into.

There were a bunch of stories that I liked as I was reading them, but just didn’t hit the top of my scale. They are still good, still enjoyable, and hit the right note between teasing their premise and satisfying it. In no particular order, these were Down in the Dim Kingdoms, An Account, by Dr. Inge Kuhn, of the Summer Expedition and Its Discoveries, Endosymbiosis and There, She Didn’t Need Air to Fill Her Lungs.

Last, but very much not least, the stories I plan to put on my Hugo Ballot next year, because they were utterly awesome. The Cleft of Bones by Kate Elliott, a story about slavery, revolution and rebirth as seen through the eyes of an absolutely fascinating character. The Voyage of Brenya by Carrie Vaughn, which is a story about gods and heroes and the way that stories turn into myths and legends. Out of the Dark by James L. Cambias, one of two space opera stories, this time about a corporate hegemonies, a salvage crew consisting of lifelong rivals, and a pre/post spacefaring civilization in which Doctor Who’s Leela would have been right at home.

Three stories were utter gems from start to finish. Pellargonia: A Letter to the Journal of Imaginary Anthropology by Theodora Goss, which consists entirely of a letter written to the afore-mentioned journal by three high school students who took the founding principles of the journal – that imaginary anthropology could create real countries – and ran with it all the way into Wikipedia, the nightly news, and a civil war that has captured one of their fathers somewhere that never should have existed in the first place.

The Orpheus Gate by Jonathan Maberry reaches back to the Golden Age of lost kingdom stories by taking the utterly science driven great granddaughter of Professor George Edward Challenger (hero of Sir Arthur Conan Doyle’s The Lost World) and putting her on a collision course with a friend of her great grandmother’s – a woman who challenges the scientist’s belief in everything rational and provable in order to force the young woman to finally open her mind to a truth she does not even want to imagine, let alone believe.

And finally, The Tomb Ship by Becky Chambers, which is a story about a loophole, about the evil that humans do in the name of a so-called ‘Greater Good’, and just how easy it is to fall into the trap and how hard it is to even think of a better way. Or even just a way that lets the protagonist sleep at night with a somewhat clear conscience. That it also feels like a tiny bit of an Easter Egg for The Outer Wilds was just the right icing on this gold-plated cake of a story.