Finding My Faith by Carly Fall is book two of her Six Savior Series. Who are those “Six Saviors”? And what are they supposed to save? All, well, some anyway, will be revealed in this romantic suspense series with a hint of SFR and what feels like more than a touch of inspiration from the Black Dagger Brotherhood.

The titular “Faith” in Finding My Faith is Faith Cloudfoot. Faith works as a barista at a coffeeshop in Phoenix, just a little bit away from her overprotective father in Flagstaff.

You see, Faith is supposed to be the legendary, “Woman with Fire for Hair” among the Navajo people. Her red hair signifies that she will be the mother of a son who will cure the Earth. But only if she mates with a red-eyed night-wolf-warrior.

Faith doesn’t believe a bit of it. She just wants to expand her boundaries away from her overprotective parents. So, she fights to move to the “big city” of Phoenix.

Faith’s life in Phoenix is terrific for the first year. Then she is kidnapped and held in an underground “prison cell” with five other red-headed women. Even stranger, after she is unconscious, her spirit leaves her body and haunts the streets near the scene of the crime, until she finds one person who can see her–a big warrior with red shining eyes.

Rayner is that warrior. He is not a native to this planet. He, and his band of warriors, are from planet SR44. They’ve been on Earth for over two centuries, chasing a band of renegades their homeworld unimaginatively labelled Colonists, for originally escaping the law by colonizing a local moon.

Those Colonists are now on our Earth, becoming mass murderers, serial killers, and political despots and megalomaniacs. Oh, and interbreeding with humans. Colonists’ offspring usually become Colonists, too, but the strain does eventually become diluted. And nurture sometimes triumphs over nature.

Rayner and his band of brothers have come to Phoenix to hunt one of those Colonists who is kidnapping and murdering women. Rayner’s particular talent is to be able to unite spirits with their bodies, in other words, he can bring people back to life. But there’s a catch!

He can only do it if the spirit can find its body. And the body is still “habitable”. And if there is someone who loves the person and who they love back. A lot.

Rayner and his warrior band have been on Earth over two centuries, hunting down Colonists. They are inhabiting human bodies that never age. They can be killed, and they have to maintain their bodies, but no aging or death by natural causes.

Faith’s spirit, wandering the streets of Phoenix, is the key to finding the Colonist that Rayner and his friends are out to catch. So it’s important that Rayner keep in contact with her as they hunt the bad guy. Very important.

There’s this one big problem. The Warriors can’t go back to their homeworld until the last Colonist is dead. It could be centuries. But if one of the Warriors falls in love with a human, and makes love with her (not just sex, but really makes love with her) he’ll lose his native form and become human, age, and eventually die.

He won’t be able to go home again. Ever. And he won’t be able to finish the mission. Rayner promised his mother he would come home. No matter how long it takes. He’s made a vow to finish the mission, no matter how long it takes. But he fell in love with Faith the minute he saw her spirit. What good is a warrior without his soul?

Escape Rating C: Based on the description, I was expecting more of a science fiction romance than this actually turned out to be. The SFR aspects are definitely downplayed in the story itself.  The story we have is über-powerful and über-huge band of good-guy warriors chasing down über-evil dudes who leave behind “ash” when they do something wicked.

Substitute baby-powder for ash. Sound familiar? I’m afraid it rang a bell for me. The band of testosterone brothers fighting evil is a tried-and-true theme, and it works, every war story uses it. But if you describe the good guys as all being over 6’5″, and the bad guys leave powder residue, then the theme is suddenly derivative. It might not be intentional, and YMMV.

The legend attached to Faith made the story a bit different. I liked her character, but  not the way she asserted herself one minute and then folded the next. If there was a reason for her willingness to bow to her parents’ wishes that I didn’t understand, where was that explanation? She is 23 not 16. If she feels like she can’t move out without permission, tell the readers why.

(This review copy was provided by Bewitching Book Tours. Bewitching requested additional reviews outside of the tour, and here we are!) 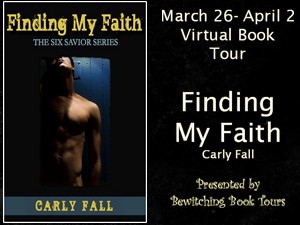 2 thoughts on “Finding My Faith”