The House of Velvet and Glass is Katherine Howe’s second novel, after her fantastic breakout debut, The Physick Book of Deliverance Dane. Both stories have a certain magic in them.

While Dane’s story was about the practice of witchcraft, Sybil Allison, the character who provides our entree into The House of Velvet and Glass, is interested in spiritualism. Sybil’s usually practical nature has found refuge in the search for contact with her loved ones who have passed “beyond the veil”. She was not alone in her search in the upper class of Boston of 1915, or anywhere for that matter. Spiritualism was very popular. 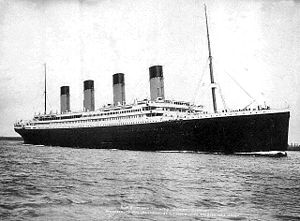 But membership in the seance that Sybil attended was special. Everyone in that select group lost a loved one at the same place and time: on April 15, 1912, in the frigid waters of the North Atlantic, when the RMS Titanic sank on her maiden voyage. Sybil’s mother and younger sister were among the 1,517 dead.

Sybil now runs the house for her father and her younger brother, but life has lost its spark for all of them. By returning to the same medium that her mother used to visit, Sybil searches for reassurance that her mother’s spirit has found peace somewhere, while Sybil has none of her own.

In the real world of 1915, three years after the disaster, the Allston family is drifting apart, Sybil to spiritualism, her father to his shipping business, and her brother Harley to dissipation and ruin.

Harley’s dissipation leads him to a severe beating and hospitalization. as well as a discovery of how far he’s fallen, and who he’s fallen with. He’s been thrown out of Harvard, and has taken up with a young actress. In the wake of his injuries, his young lady is brought into the house, and Dovie shakes everyone back to life.

Sibyl takes Dovie under her wing; she fills the space in her heart left by her younger sister. And Dovie takes Sybil to places Sybil might never have otherwise gone, and she does things that she might otherwise not have done. The actress takes her to smoke opium one fine afternoon, and Sybil discovers that, with the help of the opium, she can see the last night on the Titanic, or so she believes.

Her friend Benton Derby is sure she’s just fooling herself. He is a psychologist, he doesn’t believe in spiritualism. His colleague, Edwin Friend, on the other hand, believes that spiritualism might have a scientific basis. Even though Professors Derby and Friend expose Sybil’s medium as a fraud, Dr. Friend still believes spiritualism might be real.

But it is 1915, and there is a war in Europe. Whether or not spiritualism is real is about to become the least of anyone’s problems in the U.S.

Just as there are three living people in the Allston family, the story of The House of Velvet and Glass is told in three separate threads. The major thread is Sybil’s story, in the present of 1915. The second thread takes place on the Titanic, on the last night, as Helen and Eulah Allston while away the last evening of their lives, not knowing until the very end that it was all about to go smash. And finally, the third thread is the story of Lan Allston, Sybil’s father, from his days at sea.  His story ties everything together in a way that will break your heart.

Escape Rating B+: The story takes a little while to really get going, but the end races along. The last bit, I didn’t quite expect and should have. Also, I assumed that the House of Velvet and Glass referred to was the Titanic, but it’s not. I like it when an author surprises me.

2 thoughts on “The House of Velvet and Glass”