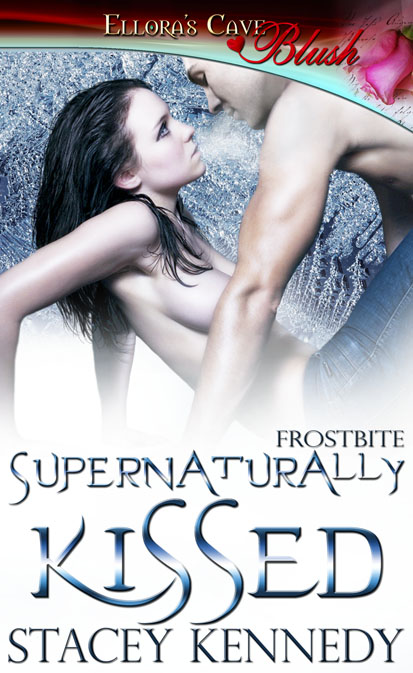 Tess Jennings sees dead people. Ghosts. And they’re usually pretty clueless. No “Ghostbusting” required. Mostly they’re lost and confused and they need Tess to deliver a final message to somebody, or close out some unfinished business for them, or maybe just tell them they’re dead. Then they move on.

They aren’t supposed to spend an entire evening whispering dirty nothings into her ear. Not in a voice so sexy it ought still be doing phone sex, whether the operator is dead or alive.

But when Kipp McGowen, starts coming on to Tess in Supernaturally Kissed, the first book of Stacey Kennedy’s Frostbite series, he’s a ghost. The most deliciously handsome and mentally together ghost that Tess Jennings has ever seen. But definitely a ghost.

Kipp is a cop with the Memphis Police Department. And he needs Tess to help him solve one final case before he can “move on”, or whatever it is that ghosts do. He needs Tess to deliver all the information he has on the case that got him killed.

What’s weird about that case is that Kipp was working a cold case. It shouldn’t have gotten anyone excited enough to gun down a cop. But it sure seems like whoever murdered Hannah Reid five years ago must have gotten nervous about a cop asking questions about the old case. Even if the cop in question doesn’t know which rock he overturned that uncovered his killer.

Kipp didn’t see his murderer. It isn’t that easy. He wants Tess to go to the police station and talk to his partner.

Tess is NOT THRILLED. She knows what’s going to happen. The cops are going to be certain she’s a fake. Or crazy. Or both. She’ll be exposing her gift (or her curse, it’s all in the definition) and nothing good will come of it. At least not for her.

But Kipp is certain this is the only way he’ll get the resolution he needs to cross over. And Tess knows she won’t get him out of her life until he does. And dammit, she finds him amazingly, incredibly hot. Having him around, as a ghost, all the time, watching her, talking to her, in that sexy voice, describing all the things he’d do to her if he weren’t a ghost–she’ll combust.

She goes to the station. And it’s every bit as bad as she feared. Except that Kipp is there with her. Really with her. So it’s good. Even though it shouldn’t be. And that’s a problem.

The more Tess works with Kipp and plays with Kipp, the more danger she is in. Working with the cops is dangerous enough, but the real danger, is to her heart. What happens if she falls in love with a ghost?

Escape Rating A: This is one of those times when the book is every bit as good as all the buzz you’ve heard. Everyone raved about Supernaturally Kissed and they were absolutely right. This story is a wow!

Tess is wounded and keeps to herself because she’s got a gift, or a curse. She can see ghosts, and she helps them cross over. Kipp is a ghost who needs her help. The only problem is that Kipp is her wildest dream of a man she would have wanted, if only he were alive!

Struggling with being a ghost, with needing to rely on others, and with the awareness that his time has already run out, makes Kipp into the man that Tess needs, except it’s already too late. Kipp’s a ghost. Resolving his last case is the loose end that keeps him from crossing over. When it’s done, he’ll be gone. But he’s a cop, and the case needs to be done so that Hannah Reid, the woman whose death he was investigating, has justice, and so that her murderer isn’t free.