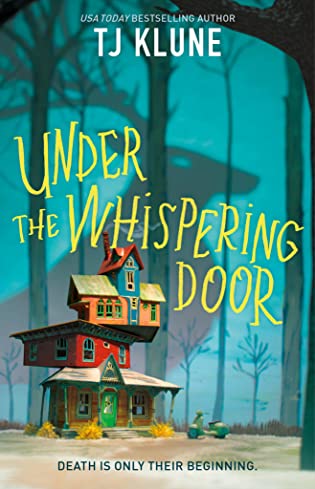 When a reaper comes to collect Wallace Price from his own funeral, Wallace suspects he really might be dead.
Instead of leading him directly to the afterlife, the reaper takes him to a small village. On the outskirts, off the path through the woods, tucked between mountains, is a particular tea shop, run by a man named Hugo. Hugo is the tea shop's owner to locals and the ferryman to souls who need to cross over.
But Wallace isn't ready to abandon the life he barely lived. With Hugo's help he finally starts to learn about all the things he missed in life.
When the Manager, a curious and powerful being, arrives at the tea shop and gives Wallace one week to cross over, Wallace sets about living a lifetime in seven days.
Under the Whispering Door is a contemporary fantasy about a ghost who refuses to cross over and the ferryman he falls in love with.

To paraphrase a classic that isn’t nearly as different as you’d think, Wallace Price was dead: to begin with. He was also an asshole.

The first condition is beyond Wallace’s own ability to change. The second, surprisingly, not so much. But unlike Scrooge’s situation, the spirits aren’t capable of doing anything to change it, and it’s going to take a whole lot more than one single night.

I know that Scrooge isn’t the one who dies in A Christmas Carol, but he was certainly headed down that road before the spirits staged their one-night intervention. The parallels are way closer than I was expecting.

Because the story about what’s behind the whispering door – not exactly under because the door is on the ceiling – is definitely a redemption story. It’s just that this redemption takes place after Wallace Price has already died. Even if he initially doesn’t want to admit it. Or accept it.

The purpose of Charon’s Crossing Tea and Treats is all about that acceptance. The redemption appears to be optional, but the acceptance, that’s required. Charon’s Crossing, pun and all, is a waystation for people who have died but who just aren’t ready to move on to their next great adventure – or the peace of the hereafter – or whatever happens next.

They need time, and that’s just what the people who make up Charon’s Crossing are there to provide. Hugo the ferryman, Mei the reaper, the irreverent Nelson who gives lessons in being dead, and Apollo the dog who won’t leave his person, not even after he’s supposed to have gone to the Rainbow Bridge, or wherever it is that good dogs go. And Apollo was, and is, a very good dog indeed.

The late and completely unlamented Wallace Price, one of the founding partners of the white shoe law firm Moore, Price, Hernandez & Worthington, is brought to Charon’s Crossing by Mei the Reaper on her first solo gig. He doesn’t want to go, he doesn’t want to be there, and he doesn’t want to accept that he’s dead.  He’s unwilling to admit that the life he barely lived is already over. And he’s still angry that his funeral was so poorly, and disrespectfully, attended.

But he’ll have all the time he needs at the tea shop to get over who he used to and learn to be who he should have been. Or so he thinks. And so Hugo hopes. Until the mysterious Manager comes to tell him that the found family he’s become a part of isn’t meant for him – no matter how much they’d love for him to stay.

So Wallace plans on one last hurrah. One final pleading before a being who is judge, jury and from a certain perspective, executioner. And it’s a doozy. The question is whether it’s enough.

Escape Rating A: Under the Whispering Door is a lovely book about the power of change and the two steps forward one step back of the process of making the attempt to change. In the end, I loved all the characters and especially the story about how they made their little found family pretty much in spite of themselves.

This is also one of the best “sad fluff” books you could possibly ever find, even though it does surprisingly manage to have a happy ending. It’s just that one person’s happy can also be another person’s letting go.

But I almost didn’t finish this. Actually the first time I read it I mostly skimmed it because the first third is hard going. Wallace Price really, truly is an asshole. Which means that the way the story is centered around him is a bit of a slog, because he’s more than a bit of a slog. And a bastard, and definitely a bastard.

To the point where the best parts of that first third are when Mei and/or Nelson get the best of him. Because Wallace SO deserves it.

So that first time I skimmed the book I missed a lot of what made it so good because I found Wallace so hard to care about. Or be in the company of. But when the audio popped up on NetGalley I decided to give it another try. And this time I fell kind of in love with the residents of Charon’s Crossing and Wallace’s redemptive story. Wallace may not just be “mostly dead” but actually all the way dead, but he still manages to get better. And isn’t that a trick and a half!

And in audio that slow but steady upwards climb captivated me and I loved every minute. Especially the times when Wallace really screws up – or gets screwed up and over – and I was laughing so hard I had to pull the car over to wipe my eyes. 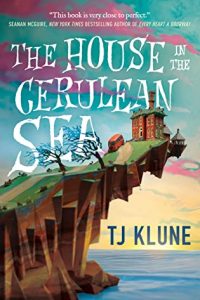 One final set of thoughts. This is being marketed as fantasy because of the author’s previous work in the genre, like the lovely House in the Cerulean Sea, and because of the “I help dead people” angle. But if this is fantasy, it’s mostly of the magical realism variety, like the now-old movie Heaven Can Wait or the even older Ghost and Mrs. Muir. It’s fantastic but not fantasy as the term is generally used.

Instead, it’s more about Wallace’s developing relationships with his found family, the town that Charon’s Crossing is located in, and his growing romantic attachment to Hugo – and very much vice-versa.

At the same time, it feels like the story hints at deeper roots to the whole setup of the ferrymen and ferrywomen (ferrypersons?) and the somewhat supernatural organization that recruits them. The mysterious Manager reads like an avatar for the Horned God of ancient myth, someone like Cernunnos or Herne the Hunter or the Green Man or even Pan. But that’s all just a hint and if you squint you might miss it.

Besides those two movies, there are other stories that touch of bits of what this does. Peter S. Beagle’s classic A Fine and  Private Place is another story about redemption after death and living the life you’ve got to the fullest.

And I believe that Hugo, the ferryman and expert tea advocate, would have a great deal to share with Sibling Dex, the tea monk of Becky Chambers’ marvelous A Psalm for the Wild-Built, as both their stories, in spite of the separation of millennia, are about the joy of found families and the surprising power of a good, well-chosen blend of tea. 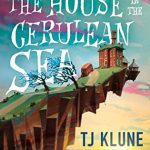 3 thoughts on “Review: Under the Whispering Door by TJ Klune”