The first succubus that Detective Marisol Whitman of the Chicago P.D. “freak squad”  knows is lost in Succubus Lost by Tiffany Allee is unfortunately one who is very near and dear to her. Marisol goes to her sister Elaine’s room to wake her up for a shoe-shopping expedition and discovers that Elaine’s bed hasn’t been slept in.

Elaine and Marisol are both succubi. And Elaine is missing. But when Marisol slams into her Lieutenant’s office to start a missing person’s investigation, she discovers that Elaine isn’t the only young succubus who has disappeared; twenty young succubi have been kidnapped over the last two years.

The Otherworlder Enforcement Agency has been tracking the case, right to her house. But the Agent the OWEA has sent, Valerio Costa, doesn’t like or trust succubi, not since one destroyed his brother’s life.

And Marisol still has other cases to deal with. There’s a murderer on the loose on the Otherworlder side of Chicago, one who burns his (or her) victims to an ash so fine the cremains can barely be recognized as human. The murderer can only be a powerful coven, or an even more powerful salamander. Which is just what Agent Costa is, a salamander.

Could the disappearances and the murders be part of the same case? The OWEA’s psychometrist says that all the victims are alive, right up until those cremains are identified as a missing siren, one previously unconnected to the case.

Then one of the victims turns up, with her powers subverted into something out of a nightmare, and her memory wiped clean. Marisol discovers that Costa has been keeping even more secrets from her about the case than even she expected from an OWEA agent–and she expected plenty.

But her sister’s life and sanity are on the line, and Marisol needs to trust someone. Agent Valerio Costa is the only one who might be able to help her get her sister back in one piece.

He’s also the hottest thing she’s ever seen–and not just because he’s a salamander. But if she trusts him and she’s wrong, he won’t need his powers to burn her heart out.

Escape Rating A-: I absolutely adore the Files of the Otherworlder Enforcement Agency series by Tiffany Allee (see my review of Banshee Charmer here). One of the things that she has done that is particularly neat is pull in species that are not the same-old, same-old. Every urban fantasy series has vamps and werewolves. And they are here, but that’s not all.

Marisol is temporarily partnering with Astrid at the beginning of the story because Astrid’s vamp partner Claude is on vacation. I love this! A vampire taking a vacation. (I hope Astrid gets a story later, BTW)

But the heroine of Banshee Charmer was a half-banshee. Not many banshee heroines. The hero of Succubus Lost is a salamander. Again, not all that common. Also, succubi, while they aren’t rare, aren’t the flavor of the month, either.

I missed some of the “cop shop” banter from Banshee Charmer. Marisol isn’t “one of the boys” the way that Mac was, so the flavor was different. But I did like the way that the events of book one affected book 2. Costa’s ID got thoroughly checked out, after the Chicago P.D. got fooled the last time.

Succubus Lost is urban fantasy that includes a strong romance between two people who have no particular reason to like or trust each other at the beginning, but need each other to solve a case. Watching them work through all their issues to earn their happy ending, is very, very satisfying. 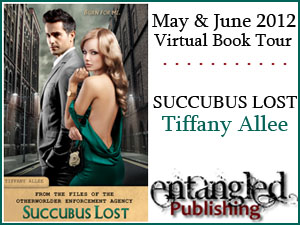