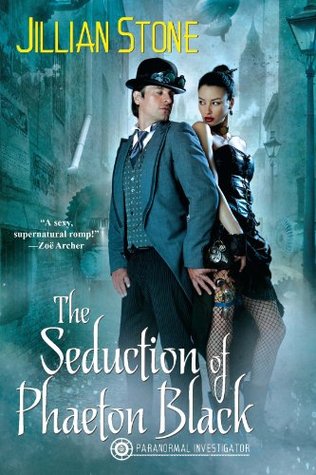 The Seduction of Phaeton Black is just that, an extremely seductive story. And not just for the steamy sex. What seduces about Jillian Stone’s first foray into this cross between paranormal and steampunk is the way in which she mixes the darkly decadent underbelly of London during what we think of as the prim and proper Victorian era with evil spirits, misplaced Egyptian gods, and steam-powered wonders.

And the very, steamy sex. Lots of it.

Phaeton Black begins the story as a discredited Special Agent for Scotland Yard. In other words, he’s been recently sacked. His theory about the Ripper was discredited. He believed Jack was a blood-thirsty spirit. The Yard was certain Jack’s motives were more, well, earthly.

Phaeton was right, but there wasn’t any way the Yard could acknowledge that fact. And too many of Phaeton’s fellow officers didn’t want to. He’s generally right, and generally insufferable about it. He’s also seen a few too many uncanny things, and not always been able to cover it up.

Being able to investigate the paranormal makes those whose viewpoints are rooted in the here and now a bit nervous.

So does Phaeton’s marked fondness for absinthe. The Yard chalks his report about the Ripper being a hungry spirit up to the “green fairy”, and gives him the sack. When another problem outside the ordinary raises its ghostly head, the Yard drags him out from the hole he crawled into.

His new apartment in the basement of a brothel. Typical Phaeton.

The heroine of this adventure is America Jones, half-Cajun witch, in search of the pirate who stole her father’s shipping company. She needs Phaeton to help her steal it back. Legally this time.

With the powers from the witchy side of her heritage, America turns out to be the bait that Phaeton needs to entrap the hungry spirit the Yard has sent him after.

Ms. Jones wants Phaeton’s connections to the Yard to help her bring down the pirates, and protect her while she hunts them. And while they hunt her.

Their plan is to use each other to achieve their mutual aims. And then walk away. He’ll catch his killer. She’ll get her company back. If they manage to enjoy each other along the way, that’s just a way to pass the time.

Phaeton Black has never known what love is. Not in any form. He certainly doesn’t expect that this American chit he intends to use is going to teach him.

Or that she will be his salvation.

Escape Rating B+: The world that Jillian Stone has created in The Seduction of Phaeton Black is a seduction all by itself. Phaeton Black is one of those especially debauched anti-heroes who hides everything he feels behind a facade of worldly charm and flippant, often rude, remarks.

He acts like a user of everyone and everything around him. But it IS mostly an act. A coping mechanism.

America Jones is also coping. She’s lost everything she every knew, and using Phaeton Black is the only way she thinks she can get it back. And survive.

The spirit world is using both of them. The Egyptian gods are haunting London. Why not? Why shouldn’t one or more of them have been transported along with Cleopatra’s Needle and all the other ancient relics the British “liberated” (read that as looted) from Egypt. what a marvelous plot-twist!

The Egyptian gods need an assist to get back home. But gods don’t request help, they demand it.

The story was fantastic. Both literally and figuratively. Steam power, Egyptian gods, spirits, familiars, and Jack the Ripper. And pirates added for spice. What a ride! Including airships.

The way that Phaeton and America use each other, yet resist their mutual pull towards any emotional attachment, draws the reader towards their story just as they are drawn towards each other.

Phaeton’s and America’s story continues in The Moonstone and Miss Jones. It needs to continue. I can’t wait to read the next book. It looks like there are many adventures ahead. 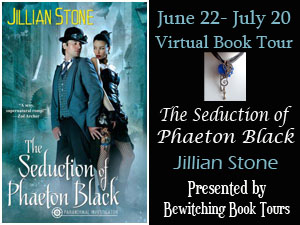 7 thoughts on “Review: The Seduction of Phaeton Black by Jillian Stone”