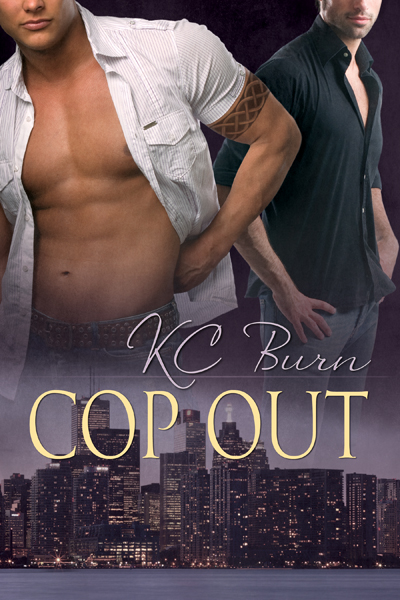 Detective Kurt O’Donnell is used to digging up other people’s secrets, but when he discovers his slain partner was married to another man, it shakes him. Determined to do the right thing, Kurt offers the mourning Davy his assistance. Helping Davy through his grief helps Kurt deal with the guilt that his partner didn’t trust him enough to tell him the truth, and somewhere along the way Davy stops being an obligation and becomes a friend, the closest friend Kurt has ever had.

His growing attraction to Davy complicates matters, leaving Kurt struggling to reevaluate his sexuality. Then a sensual encounter neither man is ready for confuses them further. To be with Davy, Kurt must face the prospect of coming out, but his job and his relationship with his Catholic family are on the line. Can he risk destroying his life for the uncertain possibility of a relationship with a newly widowed man?

Cop Out starts out with a bang, literally; Kurt’s been shot and his partner killed. He’s been paired with Ben a long time, but in a work relationship, not a true friendship. They have nearly no personal interactions, no shared confidences, and Kurt is floored with the realization of exactly how little he knew the man he trusted with his life.

It isn’t until Ben’s funeral and then by accident that Kurt realizes Davy was Ben’s partner for ten years, and then he’s further horrified to find out what sort of narrow existence Davy was forced into by Ben’s secrecy. Nothing of Davy’s personality could contaminate Ben’s life, not even a few colorful items sprinkled around their home.

Knowing that Davy would need support in his bereavement, and thinking it very unlikely that he’d get it from anyone else, Kurt appoints himself a friend and guardian; he’s got quite a bit of spare time during his recuperation, and later he’s a constant, as much as Davy will let him be. Appalled by how far short of a loving relationship between equals Ben and Davy had, Kurt wants to help Davy heal. Little moves like cheering his own favorite sports teams and bringing out the crazy quilt to stain a pristine white room mark Davy’s grieving and recovery, and Kurt’s pleased with helping along each small step.

Kurt’s own life requires some recovery: a new partner with a normal curiosity and friendship to offer helps heal him of Ben’s miasma. His new partner is there for him in a series of small milestones, and to worry about him when he’s not doing well. Simon is the antithesis of Ben; he’s a complete and decent human being.

As Kurt and Davy do a slow build back to normal, Kurt starts’ to question his feelings—this isn’t friendship as he knows it, not with ever-harder-to squash-back sexual feelings, culminating in a bout of angry sex that brings matters to a head. Because Davy rightly calls BS on Kurt for treating him the way Ben did, in many important ways.

This book is an extreme emotional roll-coaster; we see everything through Kurt’s turmoil, first over the existence of a long term relationship he never suspected, then his anger over Ben’s treatment of Davy, and especially over his own growing sexual desires. Kurt’s always thought of himself as straight but not highly sexed, and the slow reveal of the truth, first to himself, and then to family and friends, is the main focus of the story. Cop work is a background topic: even the eventual take-down of the crime lord responsible for Ben’s death is treated as a throwaway scene.

The emotional upheaval makes this a very vivid out-for-you story, and as long as we’re focused on Kurt, it’s enjoyable: even his falling-to-pieces times were well-drawn and believable. Davy though, has a decade of what is essentially an emotionally abusive relationship, and while I loved that he grew confident and even assertive, and refused to tolerate a second round of it, thinking too hard about those ten years is a little stomach churning. I hated Ben deeply by the middle of the book, and he gets no screen time as a live person.

Kurt does eventually decipher himself and comes out, although his choices of people to tell were a matter for headdesking.  Unfortunately, whacking him with a clue-by-four was not an option for the reader.

Davy and Kurt do reconcile nearly as traumatically as they met, and it’s quite satisfying to read. We’re even allowed to share a bit of them being happy together, and one closes the book with a lascivious but happy smile. Escape Rating B

Cop Out has previously appeared on Reading Reality as one of Dreamspinner Press’ November 2011 featured titles.