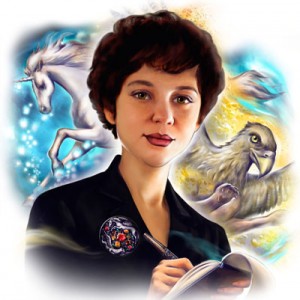 Today’s guest on Reading Reality is Irina Lopatina. She is here to tell us a little bit about her writing life, and her life in Siberia. And, of course, to talk about her fascinating debut epic fantasy, White Raven: the Sword of Northern Ancestors.

But before you take a look at the review, let’s hear from Ms. Lopatina …

Marlene: Please tell us a little about yourself. What is life like in Siberia?

Irina: On the one hand, when living in Siberia, you are in quite civilized conditions. For example, like many others here, I grew up in a comfortable apartment house, went to kindergarten and to school, studied at the university and had interesting work. But once you move away from the town, away from usual tourist routes, you find yourself in a completely different world, in the world that existed millions of years before you and that is able to progress even if there are no humans here at all. Siberia is so majestic that it quickly corrects people’s idea about themselves as “kings of nature.”

Marlene: Could you describe a typical day of writing? Do you work from a detailed outline or do you just let the writing flow wherever it takes you?

Irina: Yes, when I work I always have a plan; it is not too detailed but supports the logic of the plot. First and foremost, this plan is made in order to “fix” the story, because if I let the writing flow freely, I will certainly confuse myself and my readers. It is sometimes difficult to control one’s own imagination. 😉

Marlene: What is your favorite scene in White Raven?

Irina: I like the moments when Vraigo wanders in the forest and communicates with evil forest creatures. For example, I like the scene with the yaga. This forest witch turned out to be an amusing character who is supposed to be extremely evil, but in fact she is not. She is a sort of old grumpy neighbor who knows everything about everybody and is sometimes even ready to play pranks, but overall, she is a pretty charming creature. There is a role of a comic old woman in the Russian theater. My yaga would succeed in such a role.

Marlene: You’ve done something unusual in White Raven, you’ve taken your fantasy characters and brought them to the modern 21st century for part of the story. What inspired you to make this twist in your epic fantasy? 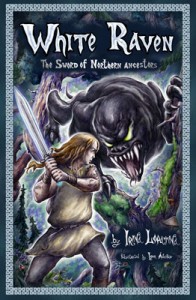 Irina: Yes, there are quite conflicting opinions of this turn of events. However, this travel to our time is an essential and logical part of the White Raven story. It is not caused by a desire to show originality, especially because such ideas are quite widespread in literature and in cinema. One of the key questions that are raised throughout the story is that of magic. Let us suppose that there was magic in ancient times (all the legends and myths tell us about this)–– where did it disappear from our world? While in the 21st century, Vraigo finds only small remnants of this miracle, which are concentrated in certain ancient objects, places and people with special abilities. Honestly, I really wanted to think about this subject, and looking at the matter from two points of view (the ancient hero and our contemporary friend) seemed to me more complete.

Marlene: You’ve said that you tried not to follow the style of other authors, but who are your favorites?

Irina: If we talk about fantasy, I like the brothers Arkady and Boris Strugatsky, Stanislaw Lem, and Ursula Le Guin. But I don’t think it is necessary to mimic their style.

Marlene: You’ve said that you enjoy traveling. Is there any special place that you’ve always dreamed of traveling to? Why that place?

Irina: Actually, I almost never travel to any particular destination. My style of traveling is rather a journey or cruise. I want to see everything. Perhaps, ideally, I want to go on a world tour!

Marlene: What projects do you have planned for the future?

Irina: As a rule, I do not talk about my unfinished projects. It is difficult to discuss what doesn’t yet have its final form. But each of these projects has some sort of a key idea that makes its way through the texture of the story. In White Raven it was a struggle (perhaps, that is why the story turned out to be trilogy – the process of struggle is endless), but now I would really like to write about freedom.

Marlene: Where do you see yourself in five years?

Irina: As usual, at my computer. 😉

Marlene: The seasons in Siberia are extremely different from one another. Which one is your favorite?

Irina: Well, I have a rather complex attitude about seasons. I love each of them, and I always look forward to them. I look forward to the first snowfall, and then the time the snow will melt. I wait impatiently for summer, which manages to annoy me in the end. And, in fact, who will endure six months of cold winter? Or the unbearable summer heat with the very distant prospect of New Year holidays? There is a song in Russia: “I always miss something – winter, summer, autumn, spring.”

What an interesting song! But the weather sounds a lot like Anchorage, and I don’t think I ever missed those six months of winter, although some people must have. 😉

Thank you so much for being such a terrific guest!

2 thoughts on “Interview with Author Irina Lopatina on Siberian Seasons”