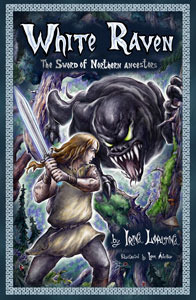 There is a fine tradition in epic fantasy of young men with wizardly mentors who go off in search of magic swords. The mentors usually die much too soon, and those swords are necessary to fight off unspeakable evil. Irina Lopatina’s debut novel, White Raven adds some wintry new elements to that fine old tradition.

And so she should be. The folk traditions that Ms. Lopatina draws her inspirations from are  not the usual Celtic flavor. Ms. Lopatina’s tales are much colder and wilder, from the seasonal swings of her native Siberia.

But the epic begins with a young prince, Vraigo, and an old wizard, Agar. Vraigo is a prince, the nephew of Vlady, Grand Duke of Areya, the great northern land. Agar’s death by magic is the first strike in a long war. Monsters have come to Areya, not in ones or twos, but great hordes of them.

There is, of course, a great sword, Urart, to fight the black monsters. Urart is a magical artifact, its power greatest against the unnatural foes. But these monster hordes have an intelligence–something is driving them. And they find a way to infiltrate the palace and steal Urart. With it, they steal any hope the humans, and other free peoples, have of defeating them.

Vraigo is a young man. He has not followed the path that his uncle expects of him. Instead of becoming a war leader, he spends his time in the forests, exploring with the druids and learning the ways of the forest creatures. He knows that the monsters are stronger than even his uncle suspects. But because he has not exactly been an obedient nephew or subject, no one is willing to listen to him.

Vraigo is also a magic user, if somewhat untutored. Magic users are not totally trusted; another strike against him. So when the great sword goes missing, Vraigo knows exactly what he must do, he must follow the trail and get it back, wherever that might lead. No matter how unfamiliar or magical a place the evil thief might have taken it.

Even if that place is as strange as 21st century Earth.

Escape Rating B: There were times when Vraigo reminded me of another young hero with a wizard mentor and a magic sword, a fellow named Arthur Pendragon, but that’s a different tradition. Also a little bit of Luke Skywalker. Which only goes to show that this hero’s journey is universal. (Even Harry Potter if you squint)

What makes White Raven stand out from the crowd is the setting and the mythology. On this side of the world we don’t see much fantasy based on Russian or Slavic myths, so the new-to-us landscape and bestiary is cool and different. Everything sparkles a bit because the world works slightly differently. Climate changes a lot.

Vraigo’s fish-out-of-water tale when he ports to 21st century Siberia makes for a fun switch on the fantasy. It also involves an entirely different set of characters in a way that will probably come up later in the series, because it seems like the author is foreshadowing that the forces behind the monsters are planning to branch out to other worlds than Vraigo’s original one. They are evil with a capital “E”.

At the same time, there are a lot of plot points going on. Vraigo’s story is a big one. Evil is on the march. Vraigo is involved with the druids, the forest people, and he is the nephew of the Grand Duke. There are political implications. Vraigo has three cousins, one of whom is the heir to the Grand Duchy, one is a magic user. And more politics. And lots of magic theory into the bargain.

Then the story moves to 21st century Earth, adding yet more complication. There was probably enough material for two whole books here. This is good epic fantasy, but perhaps it would have been that much better if it had been allowed to be a bit more epic.

4 thoughts on “Review: White Raven, the Sword of Northern Ancestors by Irina Lopatina”