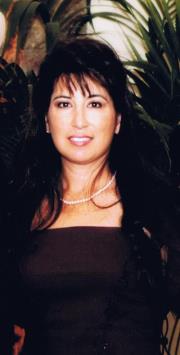 Today on Reading Reality I’d like to welcome Sheri Fredricks, the author of the utterly scrumptious Remedy Maker. (For a more in-depth look at Remedy Maker, read my review) Sheri is here to talk about her new book, and to answer some questions about her yummy hero, how she got from ranching in general to centaur-heroes in particular, and just what genre Remedy Maker falls into, anyway. Not that it matters, this one is good!

Marlene: Please tell us a little bit about yourself. What are your other passions besides writing?

Sheri: Hi Marlene! Thank you for having me here today.

Living on a ranch and working in my husband’s contracting office leaves little time for my hobby-type activities. But I do love the times when I can jump on my horse and take a detoxifying ride in the hills. 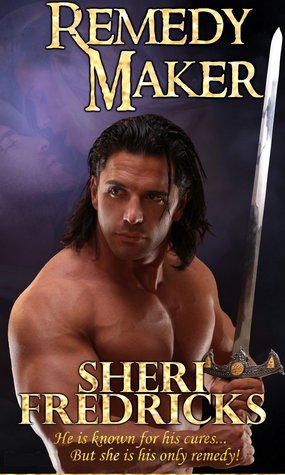 Marlene: Do you think of Remedy Maker more as a paranormal romance or contemporary fantasy? Why?

Sheri: After I wrote Remedy Maker, I had to categorize it into a genre for when I submitted it to agents and publishing houses. I had a hard time answering this very question. What it boiled down to was there are more fantasy elements involved (centaurs, trolls, nymphs, satyrs) than there were paranormal activity – such as shape shifting the centaurs perform. Contemporary fantasy is where this story calls home.

Marlene: A centaur with PTSD, what a fantastic concept! Who or what inspired you to come up with the concept of Rhycious as a character?

Sheri: After I conceived the centaur idea, I made a character chart for my major characters. Rhycious was given a name, and his personality grew as the chart evolved. Also, a few years back I met a war veteran who told me of his problems with PTSD. Specifically, how those problems interfered with his ability to interact with others on a social level. He didn’t trust himself.

Marlene: The setting of Remedy Maker is fascinating. Boronda skirts the edges of the contemporary 21st century, using a nearby Amish community as a link. What made you decide to set your fantasy romance in the so-called “real” world? And why the Amish?

Sheri: The fictional town of Willow Bay made an effective backdrop for my story because of its small town feel. A place where everyone knows everyone else. While there are other Amish mentioned in the story, Samuel Beiler is the only character involved. I chose the Amish people because they are private, don’t need the modern frills, and have a love of family and life.

Marlene: Give us a teaser. What’s your favorite scene from the book?

Sheri: Oh boy! This is a tough question because I have so many favorite scenes. I’ll share the one where Rhycious talks Patience into coming with him to the Centaur palace, a place she was taught to fear. “Nymphs go in and they never come out.”

Bacchus’ breathe. Here she stood, at the very opening where destruction had reigned on the Nymph race for over two hundred years. Even a century out of war, it struck her dumb. Humbled by the magnitude of the simple palace entry, and honored by the trust Rhycious gave her, Patience felt very inconsequential.

Rhycious turned to look over his shoulder, scanning the tree line behind them. Across the meadow, birds chased one another between leafy branches, and purple flowers waved.

He gave her fingers a tug. “Come on.”

Patience pulled back and hesitated for two heartbeats. Her dream of harmonious living and her life’s work to achieve the goal mirrored that of Rhy’s. To live with races co-mingling—the way it used to be. Before war and devastation took a toll on their people, back when trust existed between races.

Her gaze flew to Rhy, who loosened his calloused grip. Warm brown eyes watched her, gleaming like glassy volcanic rock, taking in her features. Perspiration gave his skin a healthy glow. She was acutely aware of his tall, physique du role. He thumbed the skin of her inner wrist, waiting for her to work through her fears. His touch sent electric pulses to dance up her arm.

Her lips dried out, and she licked them. It’s now or never, homie. She nodded that she was ready.

Well-lubed metal hinges swung the rock door inward. Dwarfed by the immense height of the hand-carved entrance, the narrower width was a surprise. Built expressly for Centaurs in true form, the craftsmanship appeared superb. When closed, she imagined the barest of hairline cracks—if one even knew where to look, that is.

Rhycious took a deep breath. He held it a few seconds before releasing it out in a stream. At his insistence, she entered the dark portal first, ahead of him.

Beyond the beam of daylight sneaking in with the open door, the interior loomed pitch black. Devoid of the brightness of a moment ago, the dark maw disoriented her. Cooler air mixed with the warmth from outside, another stark difference to her senses.

Rhycious—now there’s a contradiction. She huffed a nasal laugh to herself. Widely famed Remedy Maker, a powerful warrior trained to wield a sword. A man of peace and healing, yet searching for the villains who attempted to kill his queen and threatened their society’s structure.

Like the human’s biblical hero, Daniel, who was thrown into the lions’ den, Patience found herself locked in obscurity when Rhycious pushed the rock door closed behind them. Her eyes hadn’t adjusted to the dark—she couldn’t see her hand in front of her face.

Behind her, tumblers in the door’s lock fastened in place, resounding clicks broke the still, musty gloom. A trickle of water played off-key notes in the blind distance.

And Patience’s heart began to pound.

Marlene: Describe a typical day of writing. Are you a plotter or a pantser?

Sheri: I’m a plotter and proud of it! I tried pantsing once and found myself trapped in a corner without a way out. From that point on, I plotted. With the kids out of school for summer, my writing regime flew out the window. Right now, I’m writing at night when they’re watching TV with full bellies. When they’re back in school, I’ll write from about 9am to 3pm. My husband’s office work and the ranch chores get worked in…somehow. LOL

Sheri: Every teacher I ever had between Kindergarten and high school. My dad is a big proponent of reading, too. His favorite saying around the house was, “Readers are Leaders!”

Sheri: My husband, but I look back now and wonder if it wasn’t more of a dare than influence. I was reading three books a week and he suggested I write “one of those” myself. So I did. 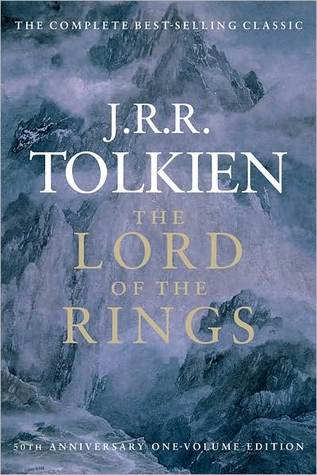 Marlene: What book do you recommend that everyone should read, and why that book?

Sheri: Aside from a book of faith, I think everyone should read The Lord of the Rings by Tolkien. The masterful way he built the world, the way readers could visualize and be there with the characters, is astounding. It’s one of those books you can read over and over again, and find parts you’ve missed the first time. Love, death, heroes, villains, they’re all part of the intricate weave of Tolkien’s world.

Marlene: What projects do you have planned for the future? Do you have any more books that follow Remedy Maker (it’s a very cool world!)

Sheri: I wrote a short story called Portals of Oz, a spin-off from the Centaur/Wood Nymph world introduced in Remedy Maker that I’ll be publishing soon. I’ve also started the next book in the Centaur series, titled Trolly Yours. This story takes one of my beloved side characters, a centaur named Aleksander, and gives him a story of his own. He’s very naughty…you’ll love him.

Sheri: Morning person. The horses and sheep start screaming at 6 AM!

Horses, screaming, ARGGHH! This is why I live in the city. But all that detoxifying horseback riding certainly produced one awesome fantasy world, no matter what hour of the (ick) morning it occurred. Thanks so much, Sheri, for stopping by, and for creating the neat new fantasy world of the Mythic Boronda Forest. I’m already looking forward to my next visit.

Sheri is giving away a $20 Amazon Giftcard to one random selected commenter during the tour.

This giveaway is open to everyone.
To be entered, leave a substantive comment about the interview or the book.
One lucky commenter will be selected from all the stops on this tour, so the more tour stops you make comments at, the better your chances! (A list of participating blogs is right here) 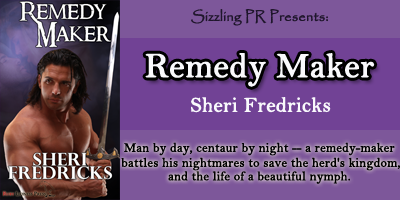 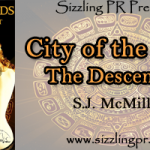