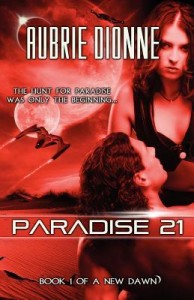 Aries has lived her entire life aboard mankind’s last hope, the New Dawn, a spaceship traveling toward a planet where humanity can begin anew–a planet that won’t be reached in Aries’ lifetime. As one of the last genetically desirable women in the universe, she must marry her designated genetic match and produce the next generation for this centuries-long voyage.
But Aries has other plans.

When her desperate escape from the New Dawn strands her on a desert planet, Aries discovers the rumors about pirates–humans who escaped Earth before its demise–are true. Handsome, genetically imperfect Striker possesses the freedom Aries envies, and the two connect on a level she never thought possible. But pursued by her match from above and hunted by the planet’s native inhabitants, Aries quickly learns her freedom will come at a hefty price.

The life of the man she loves. 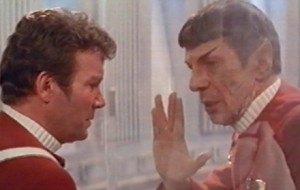 The classic science fiction line is that “the needs of the many outweigh the needs of the few, or of the one”. Mr. Spock is, after all, the authority on this sort of thing.

But what happens when you’re that “one” and you absolutely hate your lot in life taking care of the needs of that all-important “many”? And who decides what’s best, anyway?

The New Dawn is a generation ship, centuries out from a destroyed Earth, and centuries away from a new home planet. The crew/colony of the New Dawn have been raised in the belief that they carry the best genetic stock from the old world, and that their only destiny is to marry the mate the computer determines is the best genetic match from the available crew. Love and even psychological compatibility don’t enter into the equation.

The man Aries Ryder has been matched with is Lieutenant Astor Barliss. Astor is a ruthless officer–proud, ambitious, ruthless and manipulative. He’ll do anything to get ahead. It’s amazing that anyone in his ancestry was considered a perfect specimen of anything.

He’s also an abuser. Aries know that marriage to him will be a living hell. Astor has done everything he can, every minute, to kill her spirit, even just as her fiance. When they are married, he will have complete control over her. She would rather be dead.

Aries plans an escape, meticulously, carefully, as the New Dawn passes the desert world of Sahara 354. She finds that all of her education, her programming about uninhabited worlds was incorrect, as was the mis-information she was taught about the so-called inferior humans that the colonists left behind on Earth when they fled.

Because she is rescued by the descendant of one of those supposedly “lesser” humans on Sahara, a pirate named Striker, and finds him not inferior, but far superior to the people she left behind on New Dawn. Because Striker thinks and acts for himself. He wants a friend and a partner, not a mindless drone following some ancient “Code” by rote.

Aries falls in love with freedom, and with the man who represents that freedom, all too quickly. Striker keeps his emotions to himself. He’s been betrayed before. But he will help her get free of the tyrant who pursues her, or die trying.

Because Astor Bayliss refuses to give up what he thinks is his and cuts through half the planet of Sahara to get Aries back, terrorizing a whole company of his fellow colonists in the process.

The New Dawn may be headed for paradise, but Bayliss’ conduct and the rewards he receives for it reveal that its methods of getting there are anything but utopian.

And Striker, well, once he’s lost Aries, he discovers that he felt a lot more for her than he thought. Enough to rescue her from the middle of a whole ship full of hostile colonists–no matter what the cost. 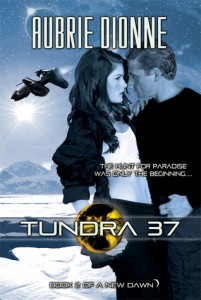 Escape Rating B: Paradise 21 is a very solid beginning to Dionne’s science fiction romance series, A New Dawn. The next books in the series are Tundra 37, A Hero Rising and Haven 6, and I’m definitely looking forward to reading them!

While on the one hand, I did find Striker’s and Aries relationship a bit too close to “insta-love” to be totally believable, I was fascinated by the portrayal of life aboard the generation ship, and how the “Code” was fraying around the edges.

I did wonder how things had evolved so that women were that completely subservient to men. It could happen, I just wondered how and why. In that small and closed a group, every hand and every brain would seem to be needed.

What does a totally closed society do with people who don’t quite conform, like Aries and Barliss? Interesting solutions in each case made for a fascinating story.