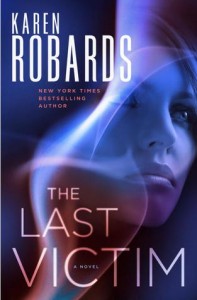 Dr. Charlotte Stone sees what others do not.

A sought-after expert in criminal pathology, Charlie regularly sits face-to-face with madmen. Obsessed with learning what makes human monsters commit terrible crimes, Charlie desires little else from life—no doubt because when she was sixteen, she herself survived a serial killer’s bloodbath: A man butchered the family of Charlie’s best friend, Holly, then left the girl’s body on a seaside boardwalk one week later.

Because of the information Charlie gave police, the Boardwalk Killer went underground. She kept to herself her eerie postmortem visions of Holly and her mother. And even years later, knowing her contact with ghosts might undermine her credibility as a psychological expert, Charlie tells no one about the visits she gets from the spirit world.

Now all-too-handsome FBI agent Tony Bartoli is telling Charlie that a teenage girl is missing, her family slaughtered. Bartoli suspects that after fifteen years, the Boardwalk Killer—or a sick copycat with his M.O.—is back. Time is running short for an innocent, kidnapped girl, and Bartoli pleads for Charlie’s help.

This is the one case Charlie shouldn’t go near. But she also knows that she may be the one person in the world who can stop this vicious killer. For Charlie—whose good looks disguise a world of hurt, vulnerability, and potent psychic gifts—a frantic hunt for a madman soon becomes a complex test of cunning, passions, and secrets. Aiding Dr. Stone on her quest to catch a madman is a ghostly presence with bad intentions: the fiery spirit of seductive bad boy Michael Garland who refuses to be ignored, though in his cat and mouse game they may both lose their hearts.

Dr. Charlotte Stone sees what others do not. And she sees the Boardwalk Killer coming for her.

The Last Victim is one of those books that didn’t know what it wanted to be when it grew up. Maybe got finished would be the better way of putting that. Even after writing a dual review with Lea over at Book Lovers Inc. I still can’t get this one out of my head (not in a good way) so I’m taking another stab at it. Or stabbing it again.

It starts out as a mystery/suspense/thriller with a paranormal twist. Charlie Stone is the only survivor of a brutal serial killer’s rampage, and grows up to become a criminal psychiatrist who specializes in, you guessed it, serial killers. But to make the story different, or to make Charlie different, the author mixed in a dose of the old “I see dead people.” Charlie’s psychic.

So when the serial killer she’s just finished interviewing gets shanked in the prison hallway, she sees his ghost leave his body, looking and sounding mighty confused.  Charlie tried to save Michael Garland, convicted serial killer of seven women, but he bled out under her hands. His enemy knew just where to stick that shiv.

The big problem is the Michael Garland is sex on a stick, undoubtedly part of how he lured in his victims. Charlie was fascinating to him while he was alive, probably not in a good way.   Now that he’s dead, his ghost is “attached” to her. That’s a problem.

The serial killer that Charlie escaped, back when she was a teenager, seems to be back. Either him or a copycat. This doesn’t fit the general serial killer profile, but someone using the exact same M.O. is at work, and the FBI wants Charlie’s assistance. She’s an expert on the man they dubbed “The Boardwalk Killer” from 15 years ago, and she’s a professional expert in this field.

While the FBI doesn’t care, nor should they, about how many personal nightmares this case awakens for Charlie, they make an absolute metric buttload of mistakes about her safety. They put her directly in the crosshairs of the serial killer she escaped. This seemed insane.

One member of the FBI team hated/resented/snarked out at Charlie just for being a psychiatrist, having zero idea about Charlie’s psychic ability. Skepticism about the woo-woo stuff would be understandable, but police agencies of all types and stripes routinely use psychiatrists and psychologists to profile serial killers. Any agent who acted out in that fashion with professionals that the Bureau needed wouldn’t BE an agent very long.

But still, the suspense/thriller thing, while it’s been done before, wasn’t bad. This whole getting the team together thing kind of worked. What derailed the train for me was Charlie’s relationship with Garland. And yes, I said relationship. What you have here is a criminal psychiatrist falling in love with the ghost of known serial killer. When they got to the point of having sex by astral projection, my eyes started rolling and wouldn’t stop. The number of ways in which Charlie should have known better stagger the imagination, and I have a pretty good imagination.

There is groundwork being laid that Garland is not as bad as his prison record makes him out to be. But until that’s proven, he’s still a convicted serial killer. And he’s dead! Either one of those factors should label him as “Danger, keep away!” in big red letters to any sane woman. Which may mean Charlie is more than a little nuts. Your mileage may vary.

Escape Rating C-: Okay, the train may have derailed, but I couldn’t stop myself from watching the wreck. You know how it is. I had to keep reading, to see what happened next. It’s over-the-top, but it’s over the top in a way that pulls you along for the ride. I did not figure out who the serial killer was. My eyes may have been rolling too hard at the ghost-sex thing.

I think The Last Victim would have been better if the author had resisted the impulse to grab quite so many packages from the troperville trolley. I counted at least five; ghost-romance, “I see dead people”, serial killer stalks his last victim, new FBI team hunts high-profile serial killers, trauma victim uses angst to forge career.  The writing was compelling, but a shorter menu might have meant for less eye-rolling disbelief on the part of many readers.

One thought on “Review: The Last Victim by Karen Robards”