I know, I know, it’s October, and Ebook Review Central is still talking about summer books. In this particular case, it’s the August 2012 books from Carina Press.

But hey, if the “Boys of Summer,” in other words, Major League Baseball, can play LONG into the NFL Football season, why can’t we keep talking about the summer books as long as we want–as long as they’re the good ones?

Based on the reviews, August was a pretty good month at Carina. At least the reviews were pretty tightly packed. Lots of titles in the 10+ review group, and then another bunch clumped at between 5 and 7 reviews. That 10+ gang made it difficult to pick the featured titles for the week, they were all excellent choices.

After reading over some of the terrific reviews for the books in that 10+ category, the three standouts, well, stood out after all. 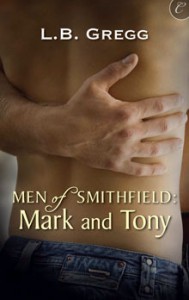 First at bat this week is also the first book in L.B. Gregg’s Men of Smithfield series. When she originally released this contemporary male/male romance in 2009, the title of the book was Gobsmacked, and readers were absolutely gobsmacked from the opening scene of the story. Mark walks into church and whacks his boyfriend upside the head with a Bible for cheating on him and wiping out their joint checking account. Then he gets pulled over for speeding by the state trooper he’s always had a crush on. Carina Press has re-released Gobsmacked as Mark and Tony (the bible smacker and the state trooper) revised and with  new material added. Readers who read both versions say it’s even better the second time around. 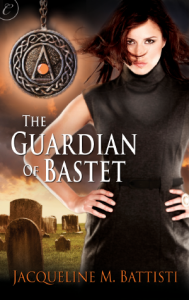 Second in this week’s lineup is The Guardian of Bastet by Jacqueline M. Battisti. This urban fantasy/paranormal romance is one of the few times where the shapeshifter main character does not shift into a big powerful predator–Trinity becomes a house-cat. A feline who is also a witch, which makes her something very different indeed. Trinity’s little corner of the paranormal is about to be visited by something very evil, and only her peculiar mix of abilities that have never quite worked makes her suitable to inherit the responsibility of being the Guardian, and the power that goes with it. This one is terrific if you enjoy your urban fantasy with a touch of the snarktastic. 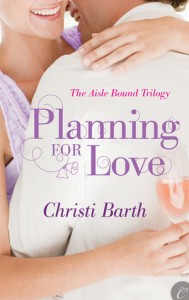 Rounding out this week’s roster we have title number three, a contemporary romance between a hopeless romantic and the anti-Cupid. The book I’m referring to is Planning for Love by Christi Barth, and it’s the first book in her Aisle Bound Trilogy. This trilogy is all about wedding planning, and in the first book, wedding planner Ivy falls in love with Ben, a guy who is allergic to love. This looks like comedy romance of the finest kind.

That’s it for this edition of Ebook Review Central. We’ll be back next time with the August 2012 titles from Dreamspinner Press.