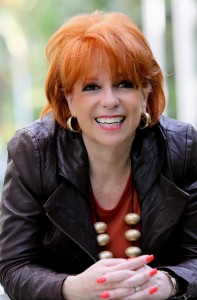 Today I’d like to give a warm welcome to Cherry Adair. Cherry is the author of the T-FLAC action/adventure romantic suspense series, and the latest book in her series is titled Ice Cold. I’ll tell you right now that the action (and the romance) in Ice Cold is plenty hot! Check out my review for more of the sizzle. And if you want a paperback copy of Ice Cold for yourself, you’ll have a shot at the end of the interview.

Marlene: Hi Cherry! Can you please tell us a bit about yourself?

Cherry: I was born in Cape Town, South Africa. My mother was a well-known opera singer and actress, and  my father was a second rate magician who took one look at her up on stage and declared that he was going to marry her. They got married a couple of weeks later. I trained as an interior designer at the University of Cape Town, then came to America in my early twenties and opened my own interior design business in San Francisco. My husband came in to look for wallpaper (it was a Wednesday <g>). By Sunday we were engaged, two weeks later we were married. That was 30 plus years ago. I still refer to him as my first husband just to keep him on his toes. Lol. 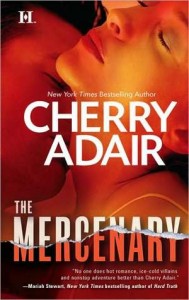 I’ve always loved to write, and sold my first book –The Mercenary– in 1993. A couple of years later I sold my interior design business in San Francisco to write full time. I write three different worlds. T-FLAC, my counterterrorists, Cutter Cay, underwater treasure hunters, and Lodestone, in which a main character has a sixth sense after a near death experience, giving him the ability to see the GPS location of a lost object or person. Currently I’m writing book # 36.

Cherry: I’m a Night Owl. I come alive at about 10 P.M. and then fall into bed at about 6 or 7 A.M. As long as I get about 8 hours sleep it doesn’t matter when or how I manage them. When I’m on a deadline (which is most of the time) I sleep in four or five hour stretches, and write in-between.

I was a pantser until I sold my first book. Then I saw the error of my ways. My right brain gets annoyed when my left brain insists on logic. <g> Now I spend a week plotting and doing basic research before I even open a Word document and write Chapter One. Plotting well enables me to use my left, analytical brain before I jump into the story with both feet. Still, even when the book is well plotted, I loathe writing the first draft. It always feels as if I’m writing. One. Word. At. A. Time. Once that’s done, and I have what I need on the page, it takes a crowbar to get me away from the story as I layer and texture all the fun parts into it.

Marlene: What drew you to write romantic suspense?

Marlene: And how do you research the military/adventure/suspense sides of the romantic suspense equation?

Cherry: I do a huge amount of research for all of my books. I do basic research before I start writing. I know what weapons my character uses, and the skills they’ll need as the story progresses. I always start with the plot, and what I need my characters to do, or what I want their experiences to be so they’re prepared for what I’m about to throw at them. There’s a lot of information to be had online, but my biggest resource is my little black book, where I keep contact information for all sorts of interesting people. People like nuclear physicists, tech people, bomb disposal experts, Navy SEALs, a famous biologist, a botanist, a lovely man who (allegedly lol) sells weapons to shady people. . .I even have some of his shady people in my black book. Lol I collect people’s skills like other women collect shoes (I collect shoes as well of course. <g>) I also have people listed by their language proficiency. (Foreign languages, not swearing. <g>) I have some pretty famous people between those pages, and some people whose number I call and the call is rerouted electronically in an awesome spy-way. I also have great contacts at some of the agencies, FBI, CIA etc. People love to talk about what they do (well, most of them). And I love, love libraries where I spend hours getting completely lost in research. Information is everywhere.

Marlene: For those newbies among us, could you give a quick intro to T-FLAC and the T-FLAC series?

Cherry: Terrorist Force Logistic Assault Command is a privately owned counterterrorist organization based in Montana. The idea was conceived on a very long, very smoky return flight from Italy many years ago. Eight T-FLAC, and six T-FLAC/Psi books, and two new series later, I’m back in the world of counterterrorists and hot sexy espionage with ICE COLD. I had SO much fun writing this book, it was like being back with old (incredibly sexy lol) friends.

Marlene: What can readers expect of Ice Cold? 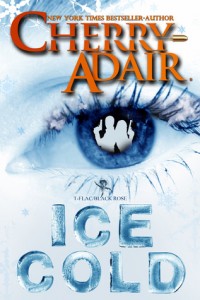 Cherry: For those who have not read any of my books – let me sum them up quickly for you. Running-chasing-shooting-wild monkey sex-action-adventure. A little over the top-a lot sexy.

ICE COLD is the story of  two counterterrorist operatives. Cyber-geek Honey Winston and bomb ‘whisperer’, Rafael Navarro as they race across Europe in search of a bomber determined to bring the organization they work for to its knees.

ICE COLD is a cat and mouse game, with plenty of twists and turns. And while the story is running-chasing-shooting-falling-down-icy weather-hot sex-sexy-romantic action adventure, at the heart of it, it’s the story of two people learning each other and eventually falling in love.

Backcover copy for ICE COLD:
T-FLAC operative Rafael Navarro will never allow another woman to suffer the consequences of his dangerous life. But in a world where a terrorist can do more damage with a keyboard than a bomb, he needs the expert help of a cyber-geek. And fast.

Fellow operative, and cybercrimes specialist Honey Winston prefers computers to people. But when a serial bomber threatens the world’s financial infrastructure, she’s forced to work closely with Navarro, whose notorious skill in the bedroom is as legendary as his dexterity defusing bombs.

Honey and Rafael must fight sparks hot enough to melt their resolve, and push beyond fear itself, as they join forces in a bid to race the clock before a sinister and lethal bomber proves just how much they both have to lose.

T-FLAC is back, and the timer is counting down in the most pulse-pounding explosive op yet—

About Cherry
New York Times bestselling author Cherry Adair’s innovative action-adventure novels have appeared on numerous bestsellers lists, won dozens of awards and garnered praise from reviewers and fans alike. With the creation of her kick butt counterterrorist group, T-FLAC, years before action adventure romances were popular, Cherry has carved a niche for herself with her sexy, sassy, fast-paced novels. She loves to hear from readers.