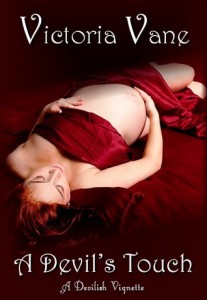 BLURB:
In her last month of pregnancy, Diana, Viscountess DeVere, has barely settled into her new life and role as “the devil” DeVere’s wife, when her increasingly restlesss husband receives an urgent summons to London. When Diana inadvertently discovers a message he received from a known courtesan with whom he was formerly linked, she fears her marriage is over before it has begun.

Just the idea of Ludo “Devil” DeVere attempting to be the perfect husband is enough to constitute the perfect Valentine’s Day present all by itself!

What’s even better is that this delightful Georgian bonbon actually delivers every bit of decadent deliciousness that lovers of The Devil DeVere Series could possibly wish for…and sets us all up for wicked delights yet to come.

On his best day, the Devil couldn’t have maneuvered his puppets any better!

But in this little vignette, Ludo DeVere is definitely not having one of his best days. He has finally found that wedded bliss is actually blissful, provided one is wedded to the right woman. For him, that woman is Diana. Through all of their acquantaince, they have thrown sparks off each other at every turn. Even when they have been at their angriest with each other, the one thing they have never been is bored with each other.

Now Diana is radiantly pregnant with his child. Also about to burst with the child. Ludo is about to burst because the damned doctor says he shouldn’t be bothering Diana for sex. Ludo’s never gone 8 hours without sex, and now it’s been 8 days. And bloody counting.

Diana has no idea what’s wrong with Ludo. She thinks he’s lost interest in her because she’s the size of a small estate. He won’t look at her. He won’t touch her. She’s lonely, bored and afraid.

Not to mention extremely pregnant.

Suddenly Ludo’s best friend Ned arrives and whisks him away to London. Ludo claims it’s an emergency regarding their boyhood friend Simon. Sin has miraculously returned to life after years as an American POW, but Diana fears there are darker motives for Ludo’s sudden disappearance. After he departs, she finds a letter addressed to him from his former paramour Salime, requesting his immediate return to rescue her.

Diana, already afraid for her marriage, and questioning Ludo’s rather recent conversion to marital fidelity after a lifetime of utter debauchery, wonders if he’ll return at all, and whether she’ll be better off (for certain utterly miserable values of “better”) if he doesn’t.

Ned gets a good laugh out of telling Ludo that the doctor was an idiot, which puts Ludo in a tearing hurry to return home, only to find that his wife has lost her rather shaky faith in him.

What lengths will they both have to go to bridge the chasm between them?

Escape Rating A: Reading A Devil’s Touch is like indulging in your favorite decadent dessert. Death by Chocolate perhaps. It is very rich, but perfectly scrumptious, and a small serving is just right! 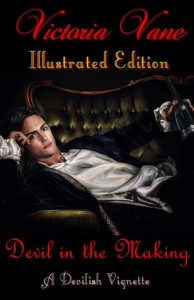 Unlike Devil in the Making, the first Devilish Vignette, A Devil’s Touch is a complete story with a beginning, middle and end. It takes some shortcuts because we are expected to know all the characters. Even Simon was previously introduced in Devil in the Making.

Part of what makes this fun is that Ludo and Diana are still themselves. Ludo is still trying to stage-manage. He loves Diana, and he wants to do what’s best for her. But rather than discuss it with her, he decides for her, and that’s where the misunderstandammit starts. He gets into a lot of scrapes, and a lot of his scrapes with Diana, that way.

I hope she thinks it’s part of his charm. 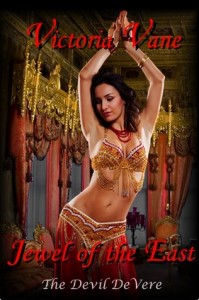 The setup for the next book in the series, Jewel of the East, is not-so-subtlely the way that Ludo rescues Salime by arranging for her to care for Simon. He’s stage-managing again. When he does it for other people, it usually works wonders.

We’ll find out in April. But first, it’s time to congratulate Lord and Lady DeVere on the birth of their son. Ludovic Valentine DeVere, born 14 February 1784.

3 thoughts on “Review: A Devil’s Touch by Victoria Vane”