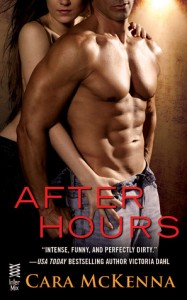 A dangerous infatuation with a rough and ready man…

Erin Coffey has been a nurse for years, but nothing’s prepared her for the physical and emotional demands of her new position. Needing to move closer to her dysfunctional family, she takes a dangerous job at Larkhaven Psychiatric Hospital, where she quickly learns that she needs protection—and she meets the strong, over-confident coworker who’s more than willing to provide it.

Kelly Robak is the type of guy that Erin has sworn she’d never get involved with. She’s seen firsthand, via her mess of a sister, what chaos guys like him can bring into a woman’s life. But she finds herself drawn to him anyway, even when he shows up at her door, not eager to take no for an answer.

What Erin finds even more shocking than Kelly’s indecent proposal is how much she enjoys submitting to his every command. But he can’t play the tough guy indefinitely. If they want to have more than just an affair, both will have to open up and reveal what they truly need.

We all know we aren’t going to get rescued by billionaires, but we do have a chance at ending the day with a guy who can fix our cars and grill a mean steak. If he can also provide enough orgasms that we walk funny the next morning–now that’s the stuff of real-life fantasy.

The story of After Hours tugs at so many hearts because it is grounded in everyday life. Erin Coffey has a job that most of us wouldn’t want: she’s a Licensed Practical Nurse at a psychiatric hospital. It’s her first real job, because she got her LPN as a caregiver while her grandmother descended through Alzheimer’s. Now she has to earn a paycheck.

Erin has always been a nurturer. Her mother has gone through a series of worthless, domineering men, and left Erin in charge of her baby sister. Now that Amber is more-or-less adult, she’s repeating their mother’s pattern, complete with an out-of-wedlock child. Erin sees herself as the only stable influence in their lives.

So she gets the job at Larkhaven Psychiatric, just so she can be near them, in spite of its location in a rundown Rustbelt town  and the fact that she’s scared to death of the job and the patients.  And that’s where she meets Kelly Robak. Kelly is an orderly at Larkhaven.

At first, Kelly seems just like all the men that her mother and her sister keep train-wrecking their lives into. He’s big and overpowering and he admits that he can’t manage relationships because the women he gets involved with won’t put up with the fact that he demands that things be his way, all the time.

Kelly has some serious control issues. But then, so does Erin. And they also have some major, blistering hot chemistry. And no one has turned Erin’s crank for too damn long.

But Erin’s not sure she’s willing to let any man dominate her, not even for the promise of the best sex she’s ever had in her life.

After a week at Larkhaven, she changes her mind. The idea of turning her mind off for a couple of days, and letting someone else be in charge, sounds pretty damn appealing. And she already knows just how good it’s going to be.

Except it’s better. The only problem is that once she lets Kelly in, she can’t keep him out. And she doesn’t even want to. But this isn’t a no-strings-attached coworkers-with-benefits fling. Whatever it is, it’s real.

Erin and Kelly are starting to not just care, but take care, of each other. And neither of them planned on that.

They’re not rescuing each other. But they are helping each other to heal from a whole lot of bad stuff that happened before they ever met. They are stronger together than they are separately. How they reach that point and the way they reach towards each other is what makes this story so damn good.

Erin and Kelly are two people who you really want to see make good. By the end of the story, you are rooting for them to get their brighter day. Awesome story.

One thought on “Review: After Hours by Cara McKenna”