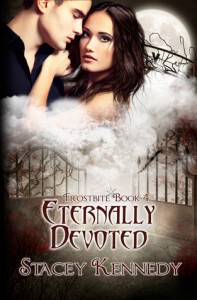 Tess Jennings, who has been gifted with the ability to see ghosts, struggles to help the Grand Master of the Animus, Alexander, cross over. She might even have discovered who murdered him, but she has no way to prove it.

Adding to her pile of failures, Tess must accept a harsh reality—she has officially run out of time. The closer she gets to an answer to save her ghost lover, Kipp McGowen, the more she’s realizing she’s been searching for an answer she didn’t want to find.

Tess will have to make difficult choices, and her decisions will lead to consequences she cannot predict. Will Kipp finally take a living breath again, or will Tess take her last and join him in the Netherworld forever? 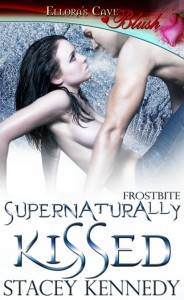 Instead of boy meets girl, or vampire meets girl, or whatever might float your paranormal boat, in Supernaturally Kissed we have Tess and Kipp, girl meets ghost. She tries to ignore him–then she tries to help him cross over.

But Kipp isn’t just any ghost. He’s a Memphis cop. Ghosts can’t cross until they resolve whatever is keeping them here, and Kipp needs to solve his last case. So Tess helps. And in the process of helping Kipp, the former bad boy cop and good girl clerk fall in love.

Kipp refuses to cross when the case is over. Tess has become his new piece of unfinished business in the world of the living. Or so they both think.

The road from that first unfinished case to Eternally Devoted has been fraught with danger. Tess has discovered that her involvement with the supernatural is much more than just the ability to see ghosts. She can help the police, she can help the ghosts.

It can also be dangerous.

And Tess and Kipp have a real chance at happiness. In the real world.

But before that can happen, she has to solve a murder of the leader of the Animus, a secret supernatural community. Maybe she’ll be able to return Kipp to his body, if she provides the right answers.

And maybe they’ll both be trapped in the Netherworld.

Escape Rating A-: The series as a whole is awesome. You really, really want Tess and Kipp to find their happy ending. Tess has worked incredibly hard for it.

One of the amazing things in the series is that Tess is the one rescuing Kipp. He’s a ghost for the entire series and can’t act in the real world. She has to do the heavy lifting. 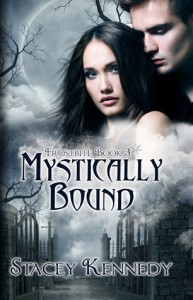 I did figure out who the “bad actors” were very early on in Mystically Bound. One of the motives was murkier than was apparent, but both of the “who” parts were pretty easy to determine. Tess was more forgiving than human nature would warrant, in my opinion. YMMV.

But, they do get their HEA. I won’t spoil the how, where and why. It’s earned, and all the loose ends are wrapped up. Thank goodness. I don’t think my heart could have taken another one of Stacey’s positively diabolical cliffhangers.

One thought on “Review: Eternally Devoted by Stacey Kennedy”