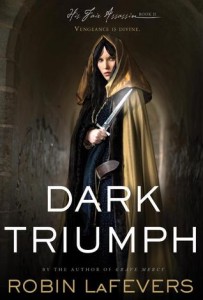 Sybella’s duty as Death’s assassin in 15th-century France forces her return home to the personal hell that she had finally escaped. Love and romance, history and magic, vengeance and salvation converge in this thrilling sequel to Grave Mercy.

Sybella arrives at the convent’s doorstep half mad with grief and despair. Those that serve Death are only too happy to offer her refuge—but at a price. The convent views Sybella, naturally skilled in the arts of both death and seduction, as one of their most dangerous weapons. But those assassin’s skills are little comfort when the convent returns her to a life that nearly drove her mad. And while Sybella is a weapon of justice wrought by the god of Death himself, He must give her a reason to live. When she discovers an unexpected ally imprisoned in the dungeons, will a daughter of Death find something other than vengeance to live for? 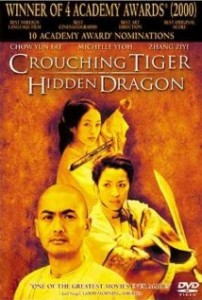 While Robin LaFevers’ series His Fair Assassin may read like Crouching Tiger, Hidden Dragon set in medieval Brittany, there’s still no magic. It’s still historical fiction. Unless you count the heroine’s dreams of visitations from her god-saint, Mortain, as magic.

On the other hand, contemporaneous stories from the same period abound with people who thought they had spoken with either God or one of his saints. Why not a nun from the convent of death?

Death is a saint, Mortain, in this only very slightly alternate Middle Ages. The series opens with the truly awesome Grave Mercy (reviewed here) and like many readers, I have been eagerly awaiting the second installment. 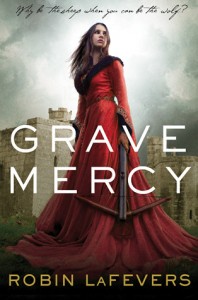 Grave Mercy made the political machinations of late 15th century France and Brittany personal by making the reader see them through the eyes of the Mortain-trained assassin Ismae. She provided a compelling perspective on events that happened historically.

Dark Triumph illuminates what happened next, but the events that unfold are from a blank spot in the history. Anne of Brittany, the important personage, had fled the scene. History does not record much of what happened to the places and people she left behind.

Into this gap walks another of Mortain’s disciples. All of the assassins are women who would otherwise not have much agency in the medieval world, and it’s part of what makes them so fascinating to watch.

Sybella is the daughter of Anne’s greatest enemy, Alain d’Albret. In Dark Triumph, Sybella’s father is the person who has betrayed Anne, and is the person from whom she flees. He is also a precursor of Bluebeard, a man who has murdered all of his previous wives. (The man makes Henry VIII look positively benevolent!) One of the fascinations of this series is where the real history overlaps (and doesn’t) the fictional.

The abbess of Mortain’s convent has sent Sybella back to her father to spy out his secrets. She’s done this knowing that Sybella’s father abused her before, and will do so again the moment she returns. Sybella goes with the promise that she will get to assassinate her father when the time is right.

The abbess has lied to her. It is not the first time.

Instead, Sybella receives word that she is to free a prisoner in her father’s dungeon. This prisoner, the Beast of Warnoch, will rally troops for Anne of Brittany, if she can save him.

Of course, if she does manage to save him, her position as a spy will be revealed. Sybella decides that she will kill her father or die trying. She would rather be dead than let herself be tortured again.

Instead, the Beast kidnaps her. He ruins her plans. He saves her. And he keeps doing it, over and over again. Even after he discovers that she is the one responsible for his sister’s death.

Escape Rating B+: The freshness of the entire concept was so amazing in Grave Mercy that I was absolutely blown away. Dark Triumph still tells a good story, but it is an incredibly dark one.

One of the weaknesses of the first-person perspective is that the reader only knows what the heroine either tells another character, or chooses to reveal in self-talk. Sybella, the heroine of Dark Triumph, has learned the trick of making sure that her face and even her thoughts reveal nothing of her inner turmoil. It’s the only way she has been able to survive her horrific childhood.

But it makes her secret-keeping very murky, because she keeps a lot of things secret from herself–most of what she has endured is too painful to think about. Her past is shrouded in mists and pain. We know that it was awful, but we lose some of the ability to empathize, and we also miss some details in the backstory.

Sybella’s story is so full of drama, and the potential for tragedy, or triumph, that it is impossible to stop turning pages.