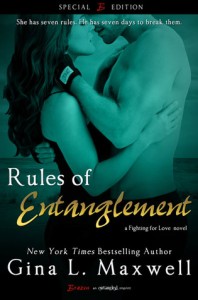 District Attorney Vanessa MacGregor firmly believes that structure and order are the stuff that dreams are made of. Happiness can be planned—and it starts with the seven rules she’s laid out for her future. But as she’s organizing her best friend’s wedding in Hawaii, all of Vanessa’s best-laid plans are about to meet their match in a wickedly hot MMA fighter…

Jackson “Jax” Maris is focused on surfing, training, and fighting. That is, until he opens up his big mouth and finds himself having to pretend he’s engaged to his little sister’s best friend, Vanessa. When they’re forced to share a romantic bungalow, however, their little charade suddenly takes a turn for the seriously sexy. And while Jax is definitely not part of Vanessa’s long-term plan, he has seven days—and seven naughty nights—to turn her seven-rule plan upside down. 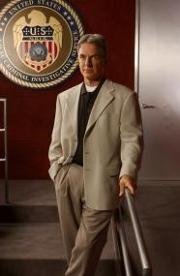 For this reader, it’s hard for a story to go wrong when one of the main characters starts by invoking Gibbs’ Rules. (For the uninitiated, that would be Leroy Jethro Gibbs, from NCIS.)

Vanessa McGregor created her seven rules to live by as a way to create structure and order in a life that originally had none. It’s her way of coping. Her rules give her control.

Jackson “Jax” Maris usually has too much control. His parents died in an accident when he was barely 18, leaving him to raise his baby sister alone. He held off on his dreams until Lucie was out of school, then he turned to MMA, mixed martial arts, and made his career as a fighter. Control, and again, control. It’s only when he takes a break on his island home in Hawaii that he lays back, a bit.

But his baby sister is marrying his best friend (see Seducing Cinderella, reviewed by Stella and me here) at the Hawaiian resort where Jax is a silent partner, so Jax has to host the festivities, and Lucie’s uber-controlling best friend Nessie. Even worse, Jax and Nessie have to stand in for Lucie and Reid in all the last-minute pre-wedding decision making while Lucie recovers from food poisoning.

It should be simple. He and Nessie should be able to work together well enough to take care of things for their friends. Except that he’s used to being in control, and so is she. And the first thing he does is break one of her “rules”. He’s late picking her up. And then, he expects to smooth it over with charm and steam-roller her into accepting his help, breaking two more rules in about two more minutes.

Nessie is so not having that. She acts more like a dragon than the sea-monster her nickname implies, and starts to breath fire. Jax, used to women falling all over themselves at his charm, is intrigued, and challenged. So he breaks the biggest rule of all. He lies to keep her with him, saying they have to pose as the lovebirds to get into the resort.

The love-bird posing becomes all-too-real, all-too quickly. Both Jax and Nessie are turned on by the challenge that the other one represents. And, they discover that what they have been looking for all along is not someone who fits their previous notions, but someone who stands up to them.

They also have chemistry hotter than an island volcano.

But can they get past Jax’ whopping big lie?

Escape Rating B: I enjoyed Rules of Entanglement, but it didn’t quite live up to the level of fantastic escape set by Seducing Cinderella. 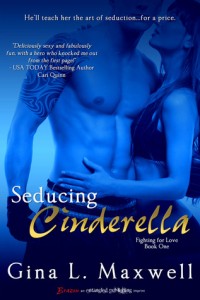 Nessie has created all those “Rules” because she’s afraid to let herself be happy. She feels guilty at not saving her little sister from probably being abused by one of their many stepfathers. That sounds awful, and it most likely was, but, we don’t get to empathize enough to really feel Nessie’s pain. We don’t meet her sister in the book, she remains a distant and mysterious figure.

Jax spends a lot of the story needing to own who he is. He found out just after his parents died that he was adopted, but never told his sister. He’s a silent partner in the resort, but no one knows. He lied to Nessie to keep her close, but doesn’t tell her the truth until it’s almost too late to save their relationship. At his sister’s wedding, he figures out a way to use his own version of “the Rules” to straighten everything out. It was very sweet, but he certainly took a roundabout way to finally get there!