Today I’d like to welcome Gina L. Maxwell, the author of the recently published Hawaiian island escape romance Rules of Entanglement (read my review of it here) and the totally awesome Seducing Cinderella (reviewed at Book Lovers Inc.) 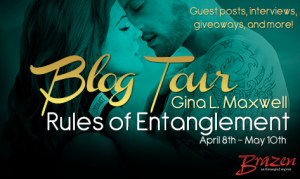 One of the best compliments I’ve received when it comes to Rules of Entanglement is not only that readers love how different my hero Jax is from my heroine Vanessa, but how well they work as a couple.  They are, for all intents and purposes, complete opposites. He doesn’t own a watch and she believes in being on time—always! To give away all of their differences would be to spoil the book for you, but penning their story really drove home the fact that the Yin-Yang relationship is one of my absolute favorite to write. Being able to develop characters that are so different and yet so perfect for each other is not only a challenge, but it’s also one wickedly wild ride. Often times, the Yin-Yang relationship seems to be the most interesting. Yes, compatibility with someone is amazing, but when it comes to “opposites” couples, there’s just a little something extra that keeps them going. It translates well on paper, but sometimes, there are moments of doubt when you think to yourself, “these people would never really be together.” In those instances, you only need to look to real life to verify your work.

Take this couple I know. Let’s call him Nick and we’ll call her Amanda. Nick likes to hunt and fish and would rather be in a tree stand than doing anything else in the world. Amanda listens to classical music, loves British comedies and does Yoga. Apart, it would never dawn on me to envision these two as a couple, but when they are together, it’s like they were meant to be. The same goes for Jax and Vanessa. I couldn’t have written any other hero for her and I for damned sure couldn’t have put him with any other woman. They fit together. For all of his surfer swagger and her DA discipline, one thing is for sure; in their case, opposites not only attract. They smolder! 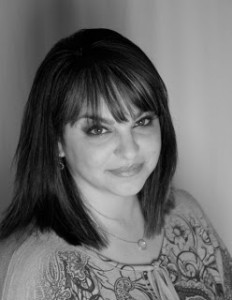 About Gina L. MaxwellGrowing up in small town Fort Atkinson, WI, Gina L. Maxwell, formerly Bisbee, could often be found onstage in the latest theatrical production, performing with her high school show choir, or holding office in her local FFA chapter. She dreamed of following in her father’s footsteps in the entertainment business, of enabling her audience to forget about life for a few hours as they enjoyed the stories she told through her love of singing, dancing, and acting. It wasn’t until her sophomore year in college when she realized she had no acting talent to speak of and her dream needed some adjusting. Another ten years would pass before she discovered a different means to accomplishing the same dream.Within those ten years Gina married her high school sweetheart, had two beautiful children, and moved more times than she cared to count. In 2009 she started writing as a hobby while her kids were in school, and it quickly became an obsession she couldn’t stop, and then a dream to publish stories of love and passion for romance addicts just like her.

Three years later, her dream came true when she signed with Entangled Publishing for a total of seven books in two of their imprints.
Her Fighting for Love series with MMA heroes debuted July 20th, 2012 for the digital Brazen imprint with the first book, Seducing Cinderella, and reached #9 on Barnes & Noble’s best seller list in just seven days.

When she’s not writing or wrangling plot bunnies, Gina keeps busy with her wonderful family and their ever-growing extra-curricular schedules. Thanks to their immense patience and support, she’s able to do The Thing She Was Meant To Do and live her dream of bringing a little romantic fantasy to the world, even if only in the pages of a good book. 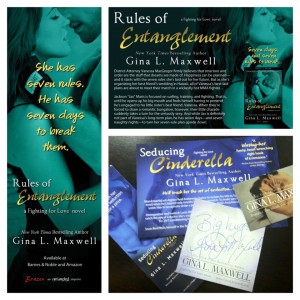 Gina is giving away a Seducing Cinderella and Rules of Entanglement swag pack!

Gina is also giving away a Kindle Fire HD or a $200 Amazon Gift Card to one lucky winner on the blog tour. To enter, use the Rafflecopter below. For even more chances to enter, visit the other stops on the blog tour!