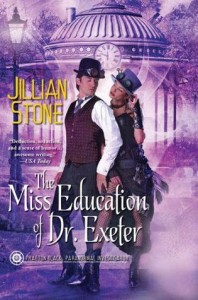 From steam-powered bunkers to steamy boudoirs, paranormal detective Phaeton Black knows his way around Victorian London. But sometimes, when you slip down a rabbit hole, there’s no turning back. . .

Phaeton Black is missing. Sucked into an alternative universe–courtesy of Professor Lovecraft’s Trans-Dimensional Injection Portal–the illustrious investigator is nowhere to be found. Even the bewitching Miss America Jones, who’s pregnant with Phaeton’s child, has no clue to his whereabouts. But when a spy fly’s microphone picks up Phaeton’s voice in the parlors of Paris, she enlists his dearest friends to track him down–before his deadliest enemies find him first. . .

Accompanied by the dashing Dr. Exeter, his delightful ward Mia, and a trusty duo of Nightshades, it’s off to the City of Lights for the determined Miss Jones. Unfortunately, there is something about Paris in the fall that brings out the devil in Dr. Exeter–and the beast in mild-mannered Mia, whose animal urges transform her into a gorgeous panther. With physical reality unraveling on both sides of the cosmic rift, the good doctor must extract Phaeton Black from the clutches of a diabolical techno-wizard–or both could lose the women they love to love. . .forever.

Any romance reader who loves the “when I kissed the teacher” trope, known slightly more formally as the “lessons in seduction” story, is going to adore The Miss Education of Dr. Exeter. This story, set in the paranormal, steampunkish, alternative universe invented by Jillian Stone of her Phaeton Black series, is firmly (pun definitely intended) of that vein.

Dr. Exeter being the teacher who both educates and gets seduced by his student, Mia.

Mia is legally an adult, but she has been Exeter’s ward for the past ten years. He’s seen her grow from child to woman and he’s having a difficult time changing how he thinks about her. Mia, on the other hand, has no problem whatsoever seeing him as the only man she’ll ever love.

Exeter wants a normal life for Mia. It’s not going to happen. Mia is a shapeshifter, and her other form is a deadly panther. The only way that Exeter, a powerful sorcerer in his own right, has discovered that she might be able to control her form shifting, is through sexual release. Not only can neither Exeter nor Mia bear the thought of another man initiating her sexually, but who else can either of them trust with the secret of her other identity?

Meanwhile, Mia must gain control of her cat. Their friend Phaeton Black is still in the hands of the alternate world wizard Propero, and his lover America Jones is very near her delivery date with their child. The child will have special powers, and needs the protection of everyone in Phaeton’s circle. The baby needs her father back, but the number of nefarious powers at work seems to be growing.

In the middle of these plots and counter-plots, Exeter is increasingly distracted by the depth of his new-found feelings for Mia. He starts out with the intention of helping her control her power, but discovers that in addition to Mia’s sexual awakening, he experiences an emotional awakening that shakes him.

It’s amazing how many times he has to let her go before he can be convinced that he belongs with her. Being a powerful wizard does not make a man any more knowledgeable about the matters of his own heart.

The worldbuilding of this alternate version of London (and Paris) is definitely a continuation of the Phaeton Black series. To understand about the Moonstone and who they are rescuing, you’ll need to have read the whole series, starting with The Seduction of Phaeton Black (reviewed here). For anyone who likes steamy steampunk, this is not exactly a hardship. The series is tremendously good dirty fun.

I would love to see more in this world. While the dangling issues from Moonstone were resolved in this story in addition to Mia and Exeter’s love story, there were a whole bunch of things from this alternate world that I would like to see explored. Could we go back? Please? 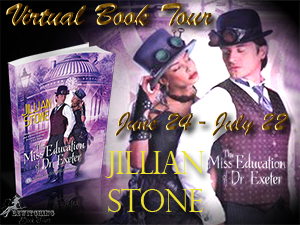 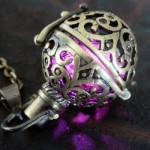 Use the Rafflecopter for a chance to win a steampunk necklace!

6 thoughts on “Review: The Miss Education of Dr. Exeter by Jillian Stone + Giveaway”