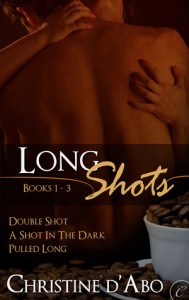 Welcome to Pulled Long café, where the coffee is hot, and the sex is hotter! Meet your hosts:

Sadie Long has been lusting after her friend Paul for years, and when she visits him at Mavericks, the sex club where he works, she’s suddenly fantasizing about being with Paul and his sexy boss Josh—at the same time.

Paige Long can’t help but be attracted to gorgeous firefighter Carter, especially once she learns he’s a Dom. But can she trust in her own desires and submit to happiness?

Anthology includes Double Shot, A Shot in the Dark and Pulled Long.

The Long siblings own Pulled Long. Sadie runs the baking and catering, Ian does the coffee, and Paige manages the business end of things. In spite of the long hours and the extremely early mornings, it’s way better than their old day jobs used to be. But the one thing that running their own business doesn’t do is leave any of them much time for a love life. Or even much of an occasional sex life. And that’s where Mavericks comes in to each of their lives. 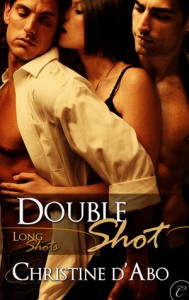 Sadie’s story, Double Shot, is basically a hotter than average friends-into-lovers story with a threesome as the opening sex act. Or possibly as the handoff. That works better than it sounds. Double Shot is really a classic story, with a kinky twist. Sadie and Paul have been best friends for years, because they met when he dated her BFF. By the time it would have been okay for her to go after him, the friendship was too good to risk. Ten years later, the seemingly unrequited lust is driving her insane! Of course she has no idea he’s in the same bad way, until he hands her a major catering job at Mavericks, and the costume to go with it.

While in one sense, the climax of the story is the threesome between Sadie, Paul and Josh, the owner of Mavericks, it really is Sadie and Paul’s romance. Josh is there to make sure the two lovebirds don’t chicken out on the way to their happily ever after, not that he doesn’t enjoy himself. But it’s bittersweet for him because he’s definitely giving his best friend away to someone who will monopolize his attention. Josh is doing the right thing for the right reasons but he’s closing a chapter in his own life. (d’Abo gets back to Josh in Calling the Shots.)

Escape Rating for Double Shot: B 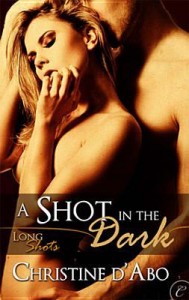 Escape Rating for A Shot in the Dark: B 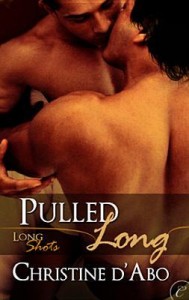 Finally, Ian’s story. He’s last because he never lets himself take any time off from the store. He works extra long hours so he really doesn’t have time for a love life. His story even has the same title as the name of their shop, Pulled Long. And his lover had to walk into the store, because Ian lives above the shop. There wasn’t anywhere else they could have met.

Ian’s fallen for a man he only knows as “Blue Eyes” for eight months. He’s a customer that Ian flirts with, talks with, but can’t manage to cajole a name out of. It’s a game they play. Jeff knows perfectly well that Ian is asking for his name, but he’s enjoying the game too. And he’s waiting for his divorce to be final before he starts dating anyone else. And that’s the problem. When Ian discovers that Jeff is finalizing his divorce, Ian breaks off their game. He’s been a straight guy’s rebound experiment before, and he does not want to go through that heartache again. Jeff knows perfectly well that he’s not straight, he’s bi, and right now, he wants to pursue a relationship with Ian because he really enjoys the friendship they’ve developed and wants to find out how far it can go. But between Ian’s long-term guilt issues, insecurity issues, and Jeff’s mistrust issues, there’s a question whether they can manage to take their relationship beyond some very hot one-night stands in risky places, or whether they’re both too screwed up to work out the best thing that’s ever happened.

Escape Rating for Pulled Long: B+

One thought on “Review: Long Shots 1-3 by Christine d’Abo”