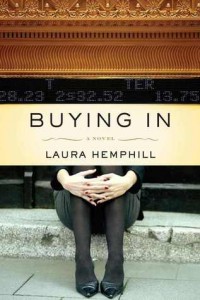 Bright, ambitious Sophie Landgraf has landed a job as a Wall Street analyst. The small-town girl finally has her ticket to the American elite, but she doesn’t realize the toll it will take—on her boyfriend, on her family, and on her. It isn’t long before Sophie is floundering in this male-dominated world, and things are about to get worse.
With the financial crisis looming, Sophie becomes embroiled in a multibillion-dollar merger that could make or break her career. The problem? Three men at the top of their game, each with very different reasons for advancing the merger. Now Sophie doesn’t know whom to trust—or how far she’ll go to get ahead.

Set inside the high-stakes world of finance, Manhattan’s after-hours clubs, and factories in the Midwest and India, this is the high-powered, heartfelt story of a young woman finding her footing on Wall Street as it crumbles beneath her. Written by an industry veteran, Buying In tackles what it means to be a woman in a man’s world, and how to survive in big business without sacrificing who you are.

What is the difference between buying in and selling out?

That feels like the fundamental question that Sophie Landgraf keeps asking herself, and that all the people in her life keep asking Sophie, during the course of the story of Buying In.

Everyone in Sophie’s life outside of her work is utterly certain that Sophie has sold out, that she has given up on the values that underpin the small farming community of Stockton, Massachusetts where Sophie was raised.

However, and it’s a damn big however, Stockton is a place where Sophie never fit in. As much as she loves her widowed father, Sophie the mathlete was always the odd person out. She was always looking to escape to somewhere MORE.

It’s possible that the New York City banking industry on the eve of the recession wasn’t it, but she couldn’t know that.

She also couldn’t possibly have stayed in Stockton and helped her father keep up the illusion that he could make ends meet on the sheep farm. It hadn’t worked when her mother was alive, and it really wasn’t working now.

Sophie gets caught up in the intellectual exhilaration of, for the first time in her life finding work which absolutely consumes her. It also frequently terrifies her, but her job at Sterling Bank stretches her in ways that she could never have imagined.

It also eats up every moment of her life and energy. She has nothing left for anything else, and she doesn’t want to. She can’t admit it, but she is having the time of her life. She’s living every moment on a high-wire act.

The adrenaline is addicting.

Buying In is the portrait of the banker as a young woman. Some might say that it’s about the “greed is good” mentality, but it’s not about greed for Sophie. For Sophie, it’s about finding the place where she belongs, and figuring out what it takes to stay there.

When she loses that place, it’s becomes about figuring out what it takes to get back there. Because Sophie has found out what her rightful place is. And she’s not the naive girl from Stockton anymore. She is a banker, and it’s all about the deal.

Even if she has to fake it.

Escape Rating B: Buying In gets off to a slow start. Sophie is so deeply insecure about her place at Sterling, that her desperation gets a bit wearing. At the same time, it was all-too-easy for me to empathize with Sophie when she had to work such incredibly brutal hours just to keep her job, and her family and friends refused to believe her working conditions.

While the environment at Sterling was inhuman, it was what it was. If she wanted to keep her job, she really did need to be there nights and weekends. Her bosses wouldn’t understand if she took a weekend off. There was no downtime.

And yes, she did also enjoy the rush. But still, Sophie’s struggles with her friends, her boyfriend and particularly her father were sometimes painful to witness.

The macro-story involves one single deal that is being played out just as the banking industry is going into a tailspin. The three men who start the story as the “big cheeses” in this deal represent three possible futures for Sophie; one is an inhuman machine, one loses his way in disappointment, and one does the best he can for the people in his company no matter how much it costs him.

We watch them, and Sophie, choose their fate. We know what happened to the rest of us. 2008 was not a good year, but it is fascinating to dissect.

If the story of how the banking industry got itself and the rest of the country in over our collective heads interests you, and you want to read an equally compelling but totally different view (with sex this time), try The Rare Event by P.D. Singer (reviewed here).

Laura is giving away a hardcover copy of Buying In to one lucky winner (US/Can). To enter, use the Rafflecopter below:

6 thoughts on “Review: Buying In by Laura Hemphill + Giveaway”